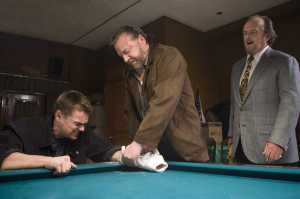 Leonardo DiCaprio, Matt Damon and Jack Nicholson star in this tale of two men undercover.  The first we meet Colin Sullivan (Damon) who’s been a criminal learning under the wing of Frank Costello (Nicholson), leader of the Irish mob, since he was a boy.  He’s now working in the Massachusetts State Police keeping Costello one step ahead of the cops.  The second is Billy Costigan (DiCaprio), who seems too smart for his shady family history.  He’s seen as the perfect candidate for an undercover cop to infiltrate Costello’s inner circle.  Two men undercover on opposite sides.  When word gets out that there’s a mole, both Sullivan and Costigan must conceal their true identities while looking for the other.

To put it simply, Scorsese has created another masterpiece.  What sets this film apart from most of his others is the amount of plot.  We don’t just watch the mighty fall or one man suddenly blow everything to pieces.  There’s a lot going on at once and if you zone out for a while you’re going to miss some game changers.  The best thing is The Departed blows your mind repeatedly until the very end (no pun intended).

One of my favorite things about The Departed is what Scorsese is best at: violence.  It’s more than just shocking or dark red-blooded entertainment.  This is the kind of violence you stand behind and cheer on in the theater.  I know that makes me sound like a psychopath, but when DiCaprio smashes his glass of cranberry juice into some guy’s bald head, I cheered.  When Nicholson beats DiCaprio’s already broken arm on a pool table, oh, it brings out that fucked up little sadist in all of us.

The Departed went to the Oscars and won best picture, director, editing and adapted screenplay.  The only nomination it didn’t win was for best supporting actor, for Mark Wahlberg.  He plays Sgt. Dignam, who is second in command for the police officers going undercover.  His foul mouthed slander rolls off the tongue with Boston eloquence.  He’s hardened and never misses a beat to call someone a fuckin’ this or piece of that.  Dignam is also one of the only friends Costigan can have, being that he’s one of the few who knows he’s really a cop.  Though I was disappointed to see Wahlberg in the role of title videogame character Max Payne, I think his nominated performance is just a hint of what he can bring to the screen in the future.  I look forward to it.

I cannot recommend The Departed enough.  The acting and actors are wonderful, story is compelling every minute.  Even if you are a little turned off by violence, I think it’s worth the effort.  Not many films these days can compare to the high standards set here.