A Tale of Two Cities

These immortal words from Charles Dickens open the adaptation of his great novel, A Tale of Two Cities.  It’s a tale of rebellion, futile love and sacrifice that the film honors well.

The story opens as the French Revolution looms overhead like a sharpened guillotine.  Lucie (Elizabeth Allan) has just found out that her father is alive and been released from Bastille.  She helps nurse him to physical and mental health back in England and meets Charles Darnay (Donald Woods), a French Aristocrat.  Because of his sympathy toward the peasants of France, Darnay is accused of treason.  His lawyer is Sydney Carton ( 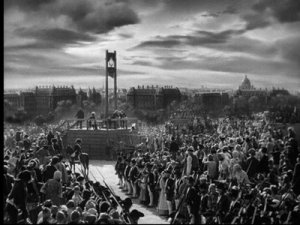 ), a cleaver man who drinks too much, but wins Darnay his freedom.  Both Darnay and Carton fall in love with Lucie, but Darnay marries her and causes Carton to drink even more.  When The Reign of Terror hits France, Darnay is tricked to come back to Paris where he’s sentenced to death by angry peasants who have taken over the judicial system.  Carton is faced with the decision to either let Darnay die and move in on Lucie, or free him by any means possible.

Colman plays a stirring Carton.  This isn’t a character that people automatically decide whether to love or hate, and Colman brings out his great complexity.  He’s triumphant in the courtroom, but romance fails him and it’s not until the final act that the audience can decide whether they can love him or not.

One of the most fascinating scenes depicts the moment the Revolution started.  Throughout the film, their desperation grows until this moment everything snaps.  Everything turns to utter chaos and peasants run through the streets throwing whatever they can find and storming the castle where the aristocrats reside.  As a drawbridge is being closed, people climb and hang off of it and eventually it’s hacked down and the whole courtyard flooded with the angry mob.  The whole scene is wonderfully exciting and a great way to portray a moment in history.

This is a wonderful adaptation of Dickens’s work and Colman plays a stirring Carton.  I recommend this film for anyone who enjoys Dickens or this period in history.