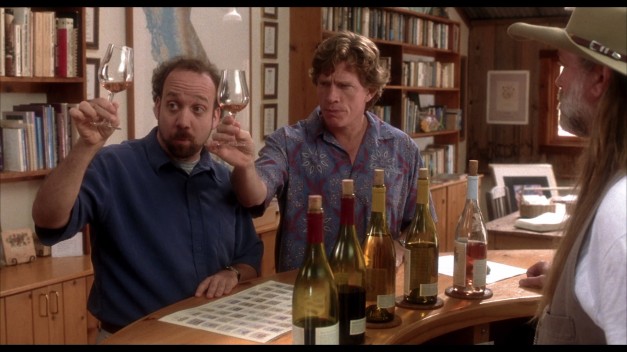 Give two middle aged men a week in California wine country and you’ve got a story.  Make one an overgrown party boy looking for one last notch on his belt before getting married and the other a depressive downer anxiously waiting to hear if his novel is being published, then you’ve got a movie.

Miles (Paul Giamatti) and Jack (Thomas Haden Church) have been friends since college.  Jack went on to become an actor, mostly in soap operas and commercials.  Miles teaches eighth grade English and spent the last three years of his life writing a novel he’s trying to get published.  So far, he’s been turned down by two publishers.  The week in wine country is Miles’ wedding gift to Jack and something they’ve talked about doing for ages.  Problem is, Miles is interested in wine and Jack is interested in getting them laid. 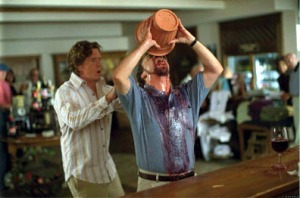 Jack sets up a double date with two of the wine waitresses they’ve met.  Stephanie (Sandra Oh) is obviously interested in Jack and Maya (Virginia Madsen) has slowly gotten to know Miles whenever he’s in town.  While Jack celebrates his last week of freedom with Stephanie (who doesn’t know he’s getting married), Miles gets put to the side.  That only gives him more time to wallow in self loathing and question if he should get with Maya.  It isn’t long before the trip turns into a disaster.

Whether you’re into wine or not, you might learn a lot about it just watching Sideways.  Miles explains how to smell the wine, why you swirl it first, how to look at it and what exactly you’re looking for.  He and Maya also talk about the process and different types of grapes.  I promise, it isn’t boring.

At times in conversation, wine becomes a metaphor.  Miles tells Maya that he enjoys pinot because it takes a real commitment to grow and let it thrive.  Is there a connection between the growing of pinot and writing a novel?  Maya explains how wine is a living thing, it had a life in the field and so many people put part of their lives into working for it.  She talks about how a wine peaks and then declines, just like people.  Is Miles at his peak?  Is Maya as well?  Why not open himself up?  What is he waiting for?  Maya obviously wants to open him up but Miles won’t, perhaps he doesn’t feel worthy since his novel, his whole life, isn’t thriving.  Never has wine talk been so deep.

Anyway, that’s my interpretation of this film.  It could be swirled, sipped and savored for the fine wine that it is, or you could chug it from the bottle and miss the whole point.  Problem is, when you just chug at life like Jack does, you’re more likely to end up with a broken nose and running back to your motel naked through an ostrich farm.

To fully grasp and enjoy this film, I believe you need to be in the double-mature audience.  That means, if your idea of a fine wine is shotgunning Keystone Light till you puke, I don’t know if this will resonate with you, but you might be able to identify with Jack.  But you don’t have to be a wine snob with the best bottle of pinot noir in town either.  What really need is a level head that can appreciate the wine talk, read between the lines and see that this is a story of men still trying to grow up in their forties.