Scent of a Woman

Have you ever been at a nice family dinner and one of the elder men at the table starts to tell old war tales, or long stories from the past and they just start to get a little…out of hand?  You know, their children try to clear their throat to quiet them and finally their wives flat out tell them that no one wants to hear that story.  I love those stories.  I love the way old men tell those stories and try to give away wit, wisdom and advice.  I could listen to old men ramble all Thanksgiving weekend.  Maybe that’s why Scent of a Woman struck such a deep chord within me.  Part of me wanted to be in Charlie’s shoes, tagging along for a weekend adventure in New York with a conniving old blind war veteran.

Charlie (Chris O’Donnell) is one of the few honest, hardworking young men at his prep school.  When he witnesses a prank, he’s suddenly left with the dilemma of squealing on his friends and getting a free ride to Harvard or face expulsion.  He has until Monday to make his decision.  While most of his classmates are there on their father’s money, Charlie’s family is in Oregon and he’s on the east coast all alone on a scholarship.  Being expelled would ruin his chances of getting into a good college.  During vacations, he can’t afford to go skiing in Switzerland with his friends, Charlie has to find work just to pay for the plane ride back to Oregon for Christmas break.

That is why he takes a job over Thanksgiving weekend to watch retired blind veteran Lieutenant Colonel Frank Slade (Al Pacino).  Frank is menacing at first, so rude and coarse to Charlie that he nearly backs out of the job.  But Frank’s daughter reassures him that it’ll be easy; just sit and watch tv and make sure Frank doesn’t drink too much.

But Frank has the whole weekend planned out with limousines, plane tickets to New York, a nice hotel room and everything.  It’s Charlie’s job to watch him, so he’s going to have to do it all over New York.  When Frank reveals his whole plan, including a loaded 45 and only one returning plane ticket, Charlie has the weight of two moral dilemmas. 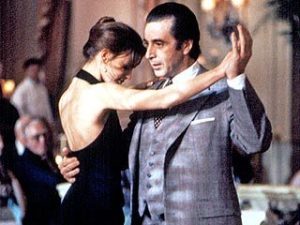 I believe that this is Al Pacino’s greatest role, and completely deserving of his Oscar win.  I absolutely love the way Pacino can make Frank sound like a lovestruck poet one second and then and then completely vulgar the next.  “Hoo-wah!” is the perfect word to describe him.  You never know what he’s going to say or do, you might hate him for it or suddenly love him all over again.  By the end of the weekend, you don’t want to see him go.

One of my favorite scenes in this film is when Frank is driving a Ferrari.  Yes, remember, he’s blind.  Charlie lets him take the wheel, thinking he’ll just drive nice and slow through the back streets of New York, but Frank has got to make that engine purr.  Suddenly, Charlie has to tell Frank when to turn between the brick buildings.  The whole scene is hysterical and heart racing.  It only gets better when Frank is pulled over for speeding.

This movie is great because it shows an appreciation for elders.  Too many times we just put them in a home or the refinished garage behind the house and forget about them.  Nobody lives a long life and just wants to be put aside, they want to go out and be a part of life, have some adventures, dance the tango with beautiful women and be heard.  The best part is, when you show them respect and dignity they’ll return the favor when you need it most.  Scent of a Woman is my pick for 1992.  Hoo-wah!

“The day we stop lookin’, Charlie, is the day we die.”

2 comments on “Scent of a Woman”