Imagine Tokyo, blazing electronic signs all over, but so few get their messages across to someone who only speaks English.  To be bombarded with so many messages, images and people you don’t understand can be crazy, scary and isolating.  You feel lost.

That’s exactly what’s going on with Charlotte (Scarlett Johansson) and Bob (Bill Murry).  Charlotte is a young newly wed traveling with her husband, John (Giovanni Ribisi), on business.  She’s just out of school with a philosophy degree and still searching for herself in many ways.  Bob is an actor and in Tokyo doing a whiskey commercial.  He’s been married for twenty-five years, but it seems that the longer he is away, the less he is needed.  Before these two meet, they seem lost, empty and searching for something to connect to.

It’s not that they’re completely alone.  Charlotte has John, all his acquaintances and a few Japanese friends.  But John is gone most of the time, the acquaintances are air-heads who don’t have anything of value to say to a young philosopher and there’s still that cultural barrier between Japanese and American with the friends.  Bob has his Japanese business associates who try to accommodate to him, but make very wrong assumptions, once again, due to the cultural barriers.  And both Charlotte’s and Bob’s phone conversations with loved ones back home seem stifled and cut short when they are most desperate for a familiar voice. 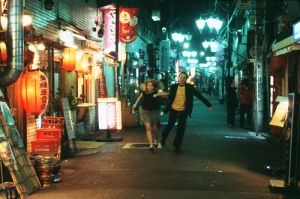 Through what I’ve seen and experienced, I believe that people who listen the most and have a high concentration to meaning in a minimum number of words have a real appreciation for connection through communication.  In contrast, motormouths who fly by the flapping of their lips usually have less of value to say and hardly listen to the world around them.  The stereotypical blond, Kelly (Anna Faris), is the perfect example of this needless noise.  It’s Charlotte and Bob who who put meaning into every word and gesture.  Every look on their face is a small revelation of their souls.  There are too few people like them in the world and far too many Kelly’s polluting the air.

There’s no real plot to the film, just as most conversations with strangers don’t have much of an arc.  What is important is Bob and Charlotte’s connection in a land of bombarding communication that is lost on them.  It’s the time in their lives where they need each other most, even if it will only last a few days.  Director and writer Sofia Coppola makes the perfect decision to let the relationship stay only platonic.  Any sort of sexual tension between Murry and Johansson would be odd and creepy.  The film doesn’t need that, it would just ruin the simplicity of the connection between the characters.

The film is a comedy too.  Holding all these deep thoughts together are perfect bits of laughter.  It’s not Murry’s typical style of comedy, Bob’s too tired of putting on a show.  Many of the jokes play off the language and cultural barriers in some way.  Of course we have a few jokes about the Japanese switching their R’s and L’s, it’s not in bad taste if it’s the truth.

The problem is, I believe the messages in Lost in Translation would be lost on many viewers.   I hear many people complain that “nothing happens.”  It’s a quiet and heavy film that holds value in the pauses of conversation just as much as the words.  It celebrates the need and importance of really connecting with people, but in a world of emoticons and LOL Facebook statuses it’s getting harder and harder to understand a real, non-digital human platonic bond.

I do recommend Lost in Translation for everyone, because we need to understand that level of connection again.  And though we usually celebrate Billy Murry as the coolest of the Ghostbusters, this is his finest work and from what I’ve researched, the film he is most proud of.

“-I just don’t know what I’m supposed to be.
–You’ll figure that out. The more you know who you are, and what you want, the less you let things upset you.”

4 comments on “Lost in Translation”