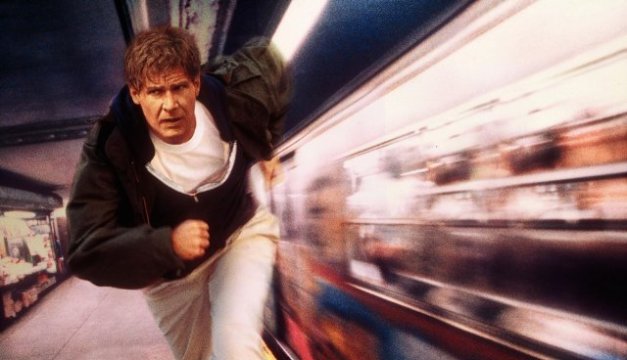 Ah, what a relief it is to watch a fast paced, red-blooded, action-thriller.  Thank you, Academy.

In The Fugitive, Harrison Ford plays Dr. Richard Kimble, who has just been wrongly accused and sentenced to death row for the murder of his wife.  We are shown his innocence as he remembers the scene and fight with a one-armed man in flashbacks during his trial.  When the bus transporting him and others to prison crashes, he escapes and sets out to clear his name by finding his wife’s real killer.  When Marshal Samuel Gerard (Tommy Lee Jones) arrives at the scene of the crash, he deduces that Kimble is at large and makes it his priority to find him.  But Kimble is smart, keeps a step ahead of Gerard and discovers a whole conspiracy behind his wife’s murder.

There are not many action films within the Academy’s Best Picture nominations.  The Fugitive is one of the select few that create a wonderful balance of big-budget action, with the a suspenseful a thriller and driven by heartbreaking drama.  So many films try this combination and just fall flat or weigh too heavily in one area, narrowing their audience.  It’s a well crafted formula that director Andrew Davis handles with care.

The action does not insult our intelligence, instead it heightens our senses.  I was hooked when the bus flipped over and we see people flying around like rag-dolls.  Then they cranked it up to eleven with the bus on train tracks and a whistle blowing.  Yes, when Kimble jumps into the raging waters of the damn, it’s a one and a million shot, but the way I see it, Kimble is smart, has a lot of will and on a mission.  He’s got what the one in a million needs.

If you’re a regular reader, you know nothing satisfies me like a good chase.  The Fugitive is a man on the run movie from the moment that bus flips and intensifies up until the very end.  There really isn’t much talk to muddle all the fun stuff down.  Most of the time, Kimble is alone, we watch him and figure out his plan with what we’re shown.

Tommy Lee Jones won the Oscar for best supporting actor.  He plays Gerard with an intense passion for his work.  He orders and makes tough calls with the decisiveness that borders on reckless.  At first it’s not about Kimble, he just wants to find a fugitive, but as time goes on, he gains respect for Kimble, his prey, his greatest challenge yet.

The Fugitive is a film that can appeal to a wide arrange of audiences.  For example, this is one of my mom’s favorite movies.  Her all time favorite is Somewhere in Time.  Big difference.  If you are a fan of Harrison Ford or Tommy Lee Jones, you need to see this.  If you enjoy a lot of suspense, some intense and intelligent action with just a dash of drama, The Fugitive is perfect for you.