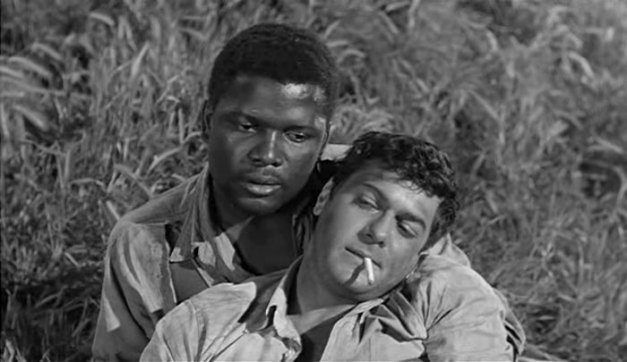 In 1958, the Civil Rights movement was gaining strength and The Defiant Ones became more fuel for the fire.  Directed by the great Stanley Kramer, the film tells the story of two escaped prisoners chained together and trying to outrun the authorities in the south, one man is black, the other white.  Though it may not have been likely that even this level of integration happened much, if ever, in the south, we accept why these two were chained together in one line, “The warden’s got a sense of humor.”  At first while Noah (Sydney Poitier) and Joker (Tony Curtis) are on the run, the usual black vs white moments come up and Joker seems to think he automatically has say over Noah.  But Noah has equal weight on that chain and doesn’t let Joker push him around.  As their journey wears on, they have to work together and through that they come to understand and respect each other, regardless of skin color. 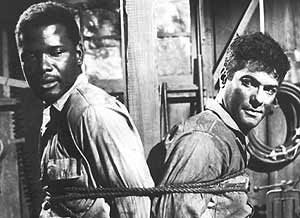 Growing up on Saturday morning cartoons, I could not help but notice that I’ve seen this plot over and over.  Sometimes it’s a Chinese finger-trap, super-glue or some wayward three-legged race but idea is the same thing:  two uncooperative people stuck together, friction at first, then resolve differences, work together and become friends.  For that basic formula to become a go-to staple for generations, I’m not surprised The Defiant Ones won the Oscar for best original screenplay.

The chemistry between Curtis and Poitier is perfect representation the tension rising in the Civil Rights era.  The way they tug on that chain and bounce anger off one another only slows them down.  The scene where they have to climb out of a deep, muddy hole is the first moments that they really have to work together: if one falls, they both go.  At that point, they aren’t friends yet, but that first step of cooperation is a start.  After the duo is caught trying to steal food in a small town, Joker is threatened with lynching just like Noah and a new foundation of understanding and respect is made. 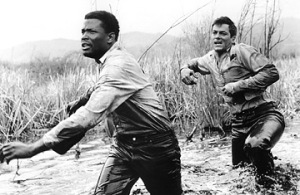 I watched this film on Turner Classic Movies on Martin Luther King Day and was wondering one thing just before the film started:  Would they edit the N-word?  No, they did not and I was proud.  In today’s world of of constantly making sure we’re politically correct, I find it appalling that people think we need to edit historical literature so that future generations won’t learn such derogatory language.  Don’t get me started on the ignorant people who are messing with Huck Finn.  In a historically accurate film about resolving racial tensions, I find that the use of the word is completely appropriate.  Especially since in 1958, that word was pretty common and less people cared much about any hurt feelings over it.

The Defiant Ones is a smart film that never turns preachy over the subject of race.  It was awarded four acting nominations, including Curtis and Poitier both in the lead actor category.  In fact Sydney Poitier was the first African-American nominated for an acting Oscar at the Academy Awards and would later win for his role in Lilies of the Field.  The Defiant Ones is a great film to kick off Black History Month.

2 comments on “The Defiant Ones”