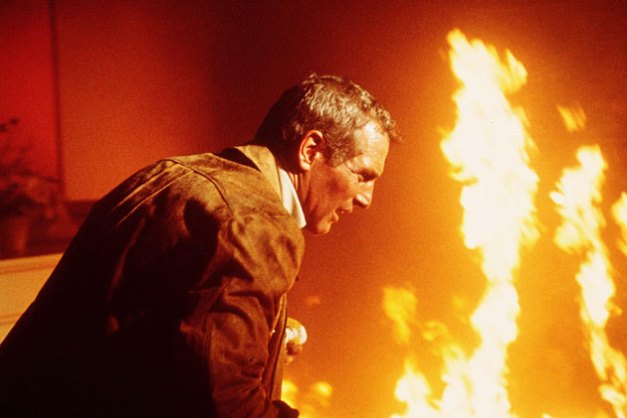 When we hear such a dramatic name like The Towering Inferno we can instinctively do two things in the year 2011:  jokingly scream Oh the humanity! and grab a strong drink.  That is not a bad way to approach this film, but that is also stereotyping.  Sure it’s one of those 1970’s disaster films, but it is the best of them.  While the story lacks and is based on a whole lot of what-ifs, the action, suspense and cinematography are so well done you can’t just toss the film aside.

Paul Newman plays Doug Roberts, the architect of the new tallest building in the world, The Glass Tower.  But the building’s owner, Jim Duncan (William Holden) has decided to cut corners and employed his son-in-law Roger Simmons (Richard Chamberlain) to find ways to cut costs.  Unfortunately, he decided to swap out Doug’s electrical plans and put in cheap wiring that is sparking random fires all over the building during the grand opening party.  The party is on the top floor, and because of the spreading fire and lack of exits, they are trapped up there.  It’s up to the fire departments Chief O’Hallorhan, (Steve McQueen) to find a way to save the people and put out fires that are far beyond the fire fighter’s reach.

The film becomes a cautionary tale of epic proportions.  In the opening credits, the film is dedicated to all firefighters and they become the real heroes.  The overall lessons we’re supposed to learn from the film is that fire fighters deserve more respect and architects need to work with firefighters to build safer buildings.  I hope architects were scared straight.

There are a lot of great action scenes, full of fire, explosions and tense moments.  Most of the action was directed by Irwin Allen, not the credited director John Guillermin.  These great moments range from fire raging down hallways, stairwells crumbling away in an explosion, a failed attempt to run through a blazing room, an elevator full of women and children hanging by one cable and an amazing climatic explosion in an attempt to save the day.  It’s all a lot of fun, these scenes can feel like mini adventures that keep you on the edge of your seat.  One of my favorites, that I remember watching as a kid, is when Newman, two kids and Liselotte (Jennifer Jones) are trapped in a destroyed stairwell.  Below them is just a long pit and they have to shimmy down to the next floor on a twisted stair rail.  All the action scenes have a wonderful element of danger that is always shown visually in a way that really pulls the tension.

Alright, back to the Oh the humanity! side of the film.  While most of the action is done well with enough suspense to keep me semi-serious, there was one moment that left me rolling and probably pushed the feminist movement back ten years.  At a point in the film, a helicopter is sent to land on the building to rescue the trapped party goers.  Paul Newman takes ten women (ladies first) up to the roof and tells them to stay back so the helicopter can land.  Well they don’t seem to grasp this concept and the two stupidest women run past Newman and head for the chopper, right in the way of its landing.  Because estrogen and high heels are a helicopter’s natural enemy, it crashes, in a magnificent fireball.  That whole ridiculous scenario seems like a bad joke that just ends with the reasons women were confined to a kitchen.  Thanks ladies, you just killed the rescue crew.

Let me not completely encourage this idea, but if you’re looking for a decent film to pair a drinking game to, this may be your winner.  Now I have seen the horrible products of drinking to a film that was not thought out while sober.  Never decide that it’s a good idea to watch Pirates of the Caribbean and take a shot every time you hear pirates, matey, savvy and Captain Jack Sparrow.  Picking just one is a better idea, but everyone has already seen POTC a million times.  So, here is my proposed game to The Towering Inferno: a drink every time someone is on fire.  Exciting, eye-catching and only gets funnier as you play.  By my calculations, there are only six of these moments throughout the 2 ¾ hour film.  No one (off screen) should die and your designated driver still has a good film to watch.  This isn’t exactly Mystery Science Theater 3000 material, but who really wants to be subject to the quality of films like ‘Manos’ the Hands of Fate?  There’s not game in the world that can make that film enjoyable.

But seriously, The Towering Inferno is a good, film.  Whether you want to seriously contemplate the intelligent visual aspects, daring stunts or just kick back and enjoy the best of what the 1970’s disaster genera has to offer, I highly recommend it.  And the best part, it’s on Netflix Instant right now, available whenever you want it.

“Did you leave a cigarette burning?”

2 comments on “The Towering Inferno”