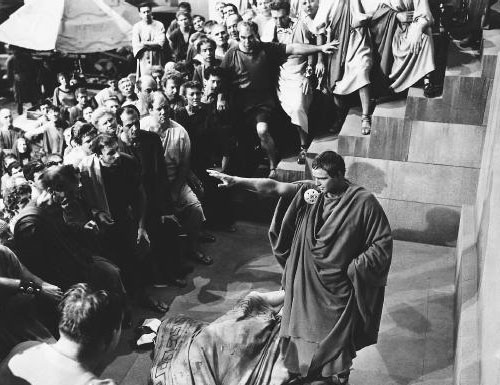 Based on Shakespeare’s play, Julius Caesar tells the story of a group of Roman conspirators who plot to murder Caesar (Louis Calhern) before his ambition for power turns to tyranny.  Brutus (James Mason) unites them under this cause for the greater good ofRome, but truthfully, Cassius (John Gielgud) and the other men murder out of their own envy of power.  Caesar is warned, “Beware the Ides of March!” by a blind soothsayer and Calpurnia (Greer Garson) warns him of an ominous dream she had, but Caesar has an image to maintain and he ignores both warnings only to be murdered by the men he trusted.  When Caesar’s right hand man, Marc Antony (Marlon Brando), learns of the conspiracy and murder, he cunningly proves his loyalty to Caesar and turns the Roman people against Brutus, drives the conspirators out of Roma and assembles a more powerful army to track them down and kill them. 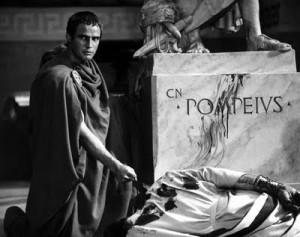 Marlon Brando’s performance as Marc Antony is one of the most invigorating Shakespearean performances I’ve ever seen on film.  When one is simply reading the play alone, grasping a good inclining tone forAntony’s speech to the Romans can be tricky.  Here, Brando escalates that speech perfectly, better than I had ever imagined as a student.  Throughout the film, he is consistently the most intense character surrounding Caesar and captivates our interest more than Mason’s Brutus or Gielgud’s Cassius.  The way Brando’s performance stands above the rest and transforms Shakespeare’s words into such dramatic and conniving passion is worth of the Oscar nomination.

The film rightfully won for best art direction for black and white film.  From depicting the great marble stairs and pillars to Roman tents, each has a wonderful attention to detail and feels very real.  Even in smooth, bare roman walls, the presence of bare tree branches, in the foreground or as shadows on walls, help make an interesting visual, especially in Brutus’s monologue the night before the murder.  And between the classical Roman robes and leather army uniforms, the costume design is wonderfully accurate and full of beautiful tiny details.

With a good mix of murder, double-crossing and classical Roman themes, Julius Caesar has always been my favorite Shakespeare play, but rarely do you find a film adaption that can do it justice.  This is one of the few, the acting is wonderfully active, dramatic and easy for those who haven’t studied the play to follow along with.  The art direction and attention to details in all the settings in costumes is top-notch, yet doesn’t feel too far removed from a simple stage.  If you’re interested in your first Shakespeare film experience, I would strongly suggest Joseph L. Mankiewicz’s Julius Caesar.

“O pardon me, thou bleeding piece of earth / That I am meek and gentle with these butchers.”