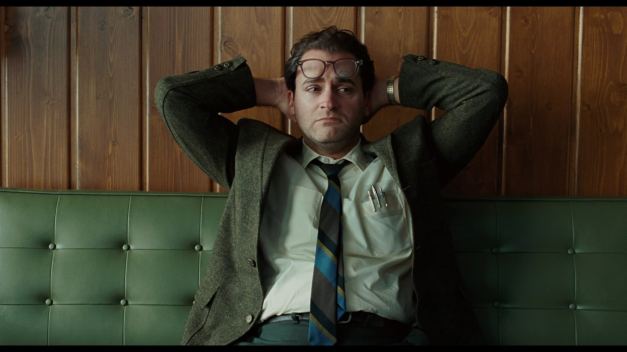 Even when life is quickly going from bad to worse to you-gotta-be-kidding-me terrible, no one is willing to admit that they are a modern day Job.  We are always taught to seek out a silver lining and keep saying, “Everything is going to be fine.”  But sometimes someone upstairs just doesn’t like you or your ancestors cursed you by bringing a dybbuk into their house and all you can do is look around in wonder and dismay at your life going down like a sinking ship.

The doomed life in question is that of Larry Gopnik (Michael Stuhlbarg), a professor who lives in Minneapolis suburb around 1967 with his wife, two kids and brother-in-law.  His wife wants a divorce asking him to stay in the seedy little Jolly Roger motel.  His son listens to rock music in class with his bar mitzva approaching.  His daughter is stealing from him money for a nose job.  One of his students is trying to simultaneously  bribe and blackmail him into a passing grade.  The tenure committee is receiving threatening letters about him.  And he can’t even get an appointment with the wisest rabbi in town.

His wife is leaving him for who he thought was his best friend, Sy Ableman (Fred Melamed).  Seeing that he is the friend and the lover turning Larry into the third wheel, Sy decides to take charge of the relationship going on by comforting Larry.  Larry isn’t the sort of man who would start a fight out of this gesture, sees it for what it is; a very weird way to try to help Larry while hurting him.

Larry stays mostly placid for nearly all of his burdens.  He just deals with them as they come, and eventually we see that they are starting to get to him.  He shows his desperation mostly to rabbis he seeks out for their council hoping for some answers, but they don’t have much advice to offer.  As his problems pile up, Larry also has dreams that quickly turn into nightmares.  They ways his subconscious figures out how to deal with these problems just turn into more disturbing things that wake him up in the middle of the night.

The weirdest part about this film is that it’s a comedy, and the Coen brothers know how to pull that off in the most delightful way.  It’s not slapstick or side-splitting, but a very black comedy born out of us repeatedly saying, “Oh, that sucks.”  The way the Junior Rabbi tries to enjoy his terrible view saying, “Just look at that parking lot!” gave me a hearty chuckle.  Sy being both the source of grief and comfort was hilarious.  The way Larry’s kids just dismiss him, even when another storm is pulling through cracked me up.   And that very end image, with Jefferson Airplane playing into the credits, all I could do was laugh.  Really, what other reaction can you have to such a terrible course of fate?

“I feel like the carpet’s been yanked out from under me.”

3 comments on “A Serious Man”