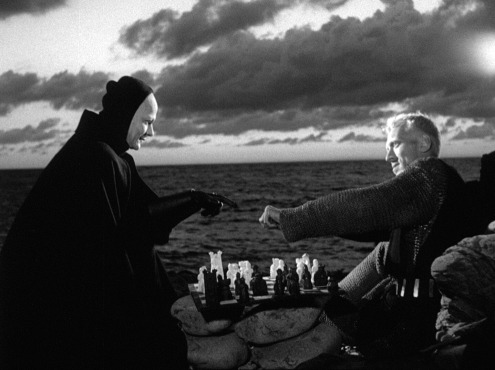 In Ingmar Bergman’s The Seventh Seal, Death (Bengt Ekerot) is a figure in a hooded black cloak and a pale, stern face.  He has been very busy lately, following a crusading knight on his way home to his castle and dealing out the black plague far throughout the land.  When he finally comes for the knight, Antonius Block (Max von Sydow), the knight strikes a deal.  They will play chess for his life.

The image of the knight, his hair lighter than his own skin, matching wits against Death is beautiful and iconic.  Through endless parodies, this image still holds its own ground in the film, and strikes quite a chord.  How arrogant do you have to be to think you can outsmart Death?  Aren’t we all destined to lose in the end? 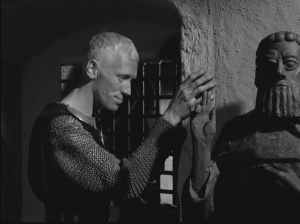 No doubt that these questions are going through the knight’s mind.  For years he has been crusading and killing in the name of God, but now he questions if God even exists.  His thoughts, fears and worries on the uncertainty that will come with death become a heavy burden for him.

His bleak outlook matches the setting.  The plague is spreading through multiple coasts and rumors talk of the Apocalypse approaching.  Tales of people dying from the Black Death are terrifying and sending people into a frenzy to repent, whipping themselves in penance and even cleansing themselves with fire.  At one point we are shown a macabre parade of monks, the diseased and repenting people shrieking, moaning, carrying crosses and spreading a cloud of incense.  It’s a very eerie moment, showing just a taste of what fear of death and damnation can cause. 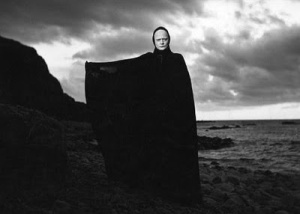 As the knight and his squire travel, playing a few moves of chess with Death as they go, they meet a group of actors.  They seem to be too cheerful, as if not getting the memo on the tough times around them.  Among them is a young family, Jof (Nils Poppe), Mia (Bibi Andersson) and their baby boy.  Their presence is a breath of fresh air in a world where plague riddled corpses are the norm.  As the threat of plague grows stronger, the knight offers to let them tag along on their journey to his castle.  But is the knight playing right into Death’s trap and about to bring his innocent friends down with him?

You see, Death has a few tricks up that dark cloak.  In one scene, the knight and his squire happen upon a church.  When the knight thinks he has found a priest to confess to, he starts spilling all his fears, his loss of faith and even his chess strategy.  The moment the knight realizes he has just told all this to Death, we feel a rage and sorrow for the man.  He is only human, and his squire (Gunnar Björnstrand) does not care to listen to his woes.  He is far too much of a realist. 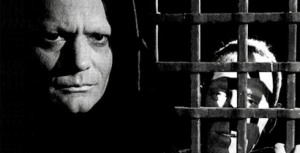 This moment, as well as many others, really help us question the existence of God as well.  Not only does he seem completely absent, letting the world become ravaged by the plague, but he lets Death pull dirty tricks.  We understand the knight’s plight.

Ingmar Bergman holds The Seventh Seal as one of the best of his films, and he is a very harsh critic on himself.  That alone makes The Seventh Seal worthy of my Oscar Snubbed status, but I have a feeling Bergman’s work was not quite on the Academy’s radar yet.  His only Best Picture nomination was Cries and Whispers in 1973.  In the introduction before the film, Bergman says that he made the film to help cope and explore his own fears on death.  What he has created here is a striking and thoughtful contemplation on mortality that every film enthusiast must see at some point.  However, a casual film fan will probably not enjoy this black and white Swedish film.  It feels very archaic, like we are completely displaced from our modern society and dropped into the dark days of plagued Europe.  That alone makes it a very beautiful film, but extremely eerie.

“We must make an idol of our fear, and call it God.”