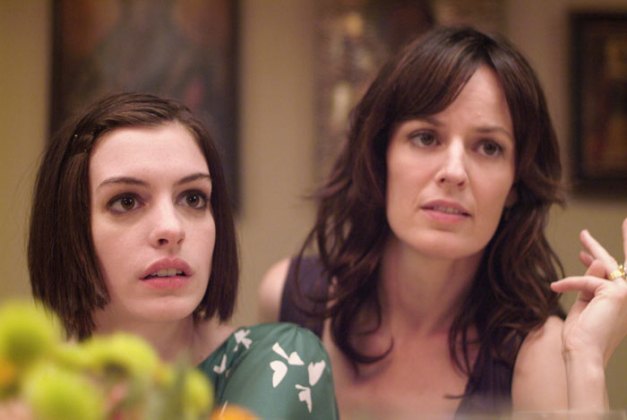 Often times, films about family tensions skirt around the main issue.  Here, Kym (Anne Hathaway) is the issue, and she knows it all too well.  She always feels the eyes upon her, judging and keeping a safe distance.  It’s enough to drive anyone mad and the bravest, and worst thing she can do is acknowledge everything that everyone is already thinking.

Kym has a sketchy and tragic history with drug and alcohol abuse since she was a teenager.  She is allowed enough time out of rehab to attend her sister Rachel’s wedding festivities for the weekend.  Little by little throughout the film, we understand more and more about how her addiction has affected her family.  Bringing up these painful memories only diminishes the spotlight and happiness that Rachel feels she is well overdue to deserve.  All the resentment that Kym feels toward her doesn’t make her recovery any easier. 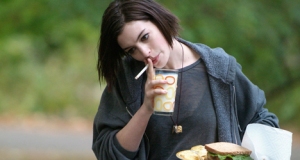 The family home is busy, filled with busy people excited about Rachel’s wedding.  Like the natural light shining in through most of the film, there is a happy sense of family here.  Kym feels it and enjoys it, but seems to be afraid she will only ruin it.  Her first scene with Rachel shows mix perfectly.  They are obviously sisters with love and memories to share, but always some tension.

At first, we may not think Kym is making a real effort to put her life back together.  She hopes to have some alone time at her family’s home and attends an AA meeting not long after arriving, but does not speak up.  After the rehearsal dinner, she hooks up with the best man (Mather Zickel), who was also at the meeting.  Later in the film, however, she opens up more, more than she probably has in years.  The old wounds we watch her open up are heart wrenchingly painful, but only after everything has been put out in the open can forgiveness have a chance.

Part of what makes Hathaway’s performance worth of Oscar nomination is the uncomfortably honest way she portrays Kym.  She blatently brings up the way everyone is walking on eggshells around her, as well as her assumption that she would be her sister’s maid of honor.  We get the sense that she is self centered, but if she isn’t honest with her family now, then when?

One of Hathaway’s best scenes is her speech at the rehearsal dinner.  It seems everyone is giving a speech but her, and she seems to grab the nearest microphone to cut in.  Repeatedly in her speech, she references her problems, sometimes with too much detail.  She fumbles and isn’t very classy here.  We’re embarrassed for her just watching, but she continues so she can make her apologies.  Kym isn’t very good at it, but at least she’s trying.  If only Rachel could understand that.

While Hathaway is the obvious star, many of the actors provide beautiful and stirring roles.  Bill Irwin’s father role shows how stretched thin he is between both daughters, but still loves Kym no matter what.  Rosemarie DeWitt’s Rachel is a tense balance between happily stressed bride and struggling with her sisterly love.  And Debra Winger as Kym and Rachel’s mother has a very bold scene I did not expect.

Rachel Getting Married is a stirring, well written film about family tensions that may not sit well for all audiences.  Such high tensions piling up right before a wedding with no laughter in sight may make this a tough film to swallow for some.  The frequent use of handheld cameras give it a lackluster indie feel, but Johnathan Demme’s direction makes it work.  And though I enjoyed the happy mix of cultures, I couldn’t help but wonder where the Indian influences for the wedding ceremony came from; Rachel seems like a very white girl and her fiance an average black man.  Nonetheless, Rachel Getting Married is a surprisingly great film, filled with tension and heartache.  That’s just how it is on the road to recovery.

“I can live with it, but I can’t forgive myself.  And sometimes I don’t want to believe in a God that could forgive me.”

5 comments on “Rachel Getting Married”