House on Haunted Hill is one of those classic movies that has been endlessly parodied, but remains delightful.  Eccentric millionaire, Frederick Loren (Vincent Price) invites a group of people for a party at a haunted house.  Anyone who stays, or survives the night, gets ten thousand dollars. 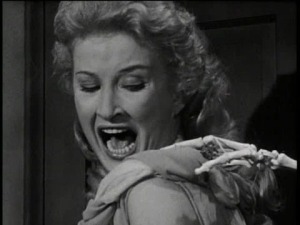 This group of party-goers was hand picked by Frederick himself.  There is the owner of the house, Watson Pritchard (Elisha Cook) who is deathly afraid of it.  His siblings were just a few of the murder victims.  Then there is Lance (Richard Long), the young test pilot; Ruth (Julie Mitchum), who writes about ghosts; Dr. David Trent (Alan Marshal) who claims ghosts could help his practice; and sweet innocent Nora (Carolyn Craig).  Nora does a good amount of the screaming.  Meanwhile, Frederick and Annabelle (Carol Ohmart) are always at odds with each other.  Some of their tension comes from the fact that she is his fourth wife and this was not the kind of party she wanted at all.

Like most movies that take place within a haunted house, there is plenty of horrific history and long halls to get lost in.  There has been a murder in nearly every room of the house, including a gruesome story of victims being chopped up and their heads never found.  A few dripping bloodstains mark gruesome spots on the ceilings   In the cellar is a pit of acid that will leave nothing but bones.  There are secret doors, dangerous chandeliers and even secret compartments in the sofa housing old murder weapons.

To spice things up, Frederick gives each person in the house a gift, neatly packed into miniature coffins: guns.  You know, to keep the murder rate up within the house up during their stay.  Fred ups the ante on the prize money for staying the night, anyone who dies gets their ten grand divided among the survivors.  Nothing like a little incentive to kill in a haunted house, right?

One of the funnest scary moments comes early in the film.  When Nora and Lance get separated while exploring the house, Nora gets quite a fright.  As she stands up from looking down at something, there is old Mrs. Slydes!  Only she isn’t really moving, she just stands like a wax figure, makes a creepy face and gnashes her teeth.  The best part is as Nora is screaming in fear, the creepy old lady leaves in a weird ghostly fashion.  It’s like she glides across the floor, not moving at all.  I know this might make it seem less scary, but I always imagined she was on a skateboard, rolling away.

House on Haunted Hill is a fun movie perfect for a big group who can scream and laugh.  The doom within the house is built up perfectly.  The ending is a blast with a big twist, and while I found it hilarious, I can see others feeling duped.  Nonetheless, it is a very fun film perfect for the Halloween season.

“The party’s starting now, and you have until midnight to find the house on Haunted Hill.”

3 comments on “House on Haunted Hill”