As a mother-to-be, Philomena struck a deep emotional chord.  Lately, I take pride in every kick and jab I endure from the child growing inside me and the thought of ever losing this new life scares me more than I have ever known.  Seeing the story of a young mother having her child taken away by women she was raised to trust and then search for him fifty years later was heartbreaking, powerful and makes me hold onto every kick and hiccup tighter.

Based on a true story, Philomena (Judi Dench) is an elderly Irish woman who kept secret the fact that she had a son as a teenager.  After fifty years of silent grief and wondering, she decides to search for him with the help of a journalist looking for his next big project, Martin Sixsmith (Steve Coogan).  Together, as a bit of an odd couple, they travel and search for clues to track down Philomena’s long lost son.

Many important and enlightening scenes come from Philomena’s past, when she lived in Sean Ross Abbey.  The nuns there harshly chastise her sin of the flesh she committed, ignorant of its consequences.  She gives birth with no medication to a breech child, both of them lucky to survive.  As pennance and repayment, Phil and other young mothers living there work all day for no pay and have one hour to spend with their children.  This goes on with little to no objection until each girl’s child is sold for adoption without warning or a chance to say goodbye.  The image of young Phil seeing her son for the last time is a tearjerker.

Yet in the present, this aged Philomena is not angry or vengeful.  She is a very sweet woman who still believes in the Catholic church and is even understanding of the nuns she lived with.  Partially, we may see her as naive and ignorant.  She does not seem to have much formal education and is easily impressed by standard niceties on the road.  But I cannot help but be impressed and envy someone who can still have such a rosy outlook on the world when she has been so wronged.

Quite the opposite is Martin, an educated and cynical man who has done well for himself.  It is hard for him to see Phil be so trusting and nice to those who have done her wrong.  He’s the character who speaks up for her, looks for justice and condemns the Catholic church and the nuns for awful things Phil and others have endured,  as many of us in the audience would. 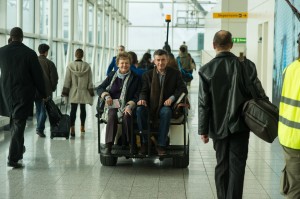 The opposing perspectives of our two lead characters can bring about how one may criticize this film.  On one hand, it can be seen as an attack on the Catholic church, raising awareness and exposing the wrongdoings of Sean Ross Abbey.  The harsh words Martin shares in a climactic scene certainly brings this idea to the forefront.  On the other hand, this film is simply a journey of discovery for sweet Philomena and how she reacts to what she finds may be a shining example of grace and forgiveness.

What I believe has propelled this film into Best Picture status is the important true story it tells.  In the age of popular shows like 16 and Pregnant, it can be hard, especially for younger viewers, to imagine Philomena’s story.  We clearly see the hardships and wounds of the past and as the film progresses it is a journey that then unfolds like a mystery as we learn more and more about Philomena’s lost child.  This is an important story that needs to be shared for all the wronged mothers from Sean Ross Abbey.  Best of all, it can warm your heart and break it all at the same time.

“I forgive you because I don’t want to remain angry.”