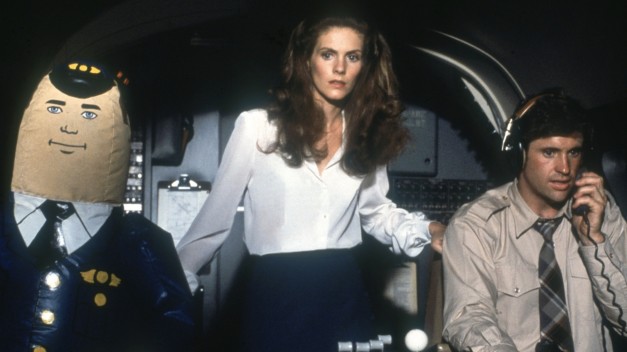 One of my favorite comedies is Airplane!  It’s a predictable, cliche story of a young Air Force veteran who has to step up from his angst to take command of a doomed flight after all the pilots become violently ill from eating the in-flight fish.  Really, no one cares about the story, like I said, it’s cliche, a silly cookie cutter plot complete with troubled love,a little girl on her way for a heart transplant and a “drinking problem”.  What makes Airplane! great is how simply absurd and wacky the film is throughout.

The comedy style in Airplane! falls somewhere between Saturday Night Live skits, Mad Magizine and knock-knock jokes.  The actors rarely act like they are being funny, but keep a serious face no matter if they’re wearing an extra pair of sunglasses, holding a smoking smoking ticket or making the same pose as the painting of themselves in the background.  Even when things are completely ridiculous to the audience, a good amount of self control is taken to keep the characters believing in their dire situation.  The situation is corny, so we don’t care, but it’s the comedy that keeps us watching. 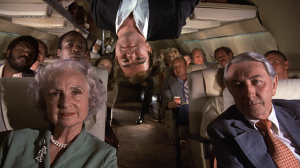 And it’s rarely vulgar, which is so refreshing from many of today’s comedies.  There is no constant cursing, any sexual jokes are light enough that most parents would be comfortable with their children around.  Though, there is one instance of nudity…which catches you completely off guard, but it is hilariously unexpected!  Besides that one boob shot, and shit literally hitting a fan, just the unique way Otto is inflated could be considered vulgar.

Best of all, Airplane! has some of my favorite movie spoof moments.  The film opens with music from Jaws and a plane’s fin protruding through the clouds.  The disco scene reminiscent of Saturday Night Fever is delightfully ridiculous, complete with cartoon sound effects and fist-fighting Girl Scouts.  The romantic scene in the surf channels a more realistic view of the iconic scene in From Here to Eternity, with seaweed covering the couple.  And the whole film is a wonderful spoof of the overly-dramatic disaster films of the 1970s, especially Airport.

My favorite character is Stephen Stucker’s Johnny, who seems to embody the true spirit of the film.  He is the only character that is outright silly, and knows it.  His antics are always high points in the film for me.  My favorite moment in Airplane! is when the runway lights go out just as the plane coming in to land and Johnny is mischievously holding the plug and grinning, “Just kidding!”

Sure, Airplane! isn’t the sort of film that gets any recognition at the Oscars, but so what?  It’s a fun, memorable classic that has stood the test of time better than some of the films it spoofs.  There are few comedies that dare to be this corny, this unrefined and still pull off big laughs. 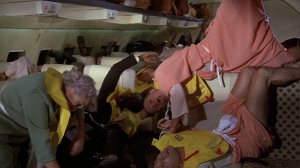 Every time I watch Airplane! I notice something new that keeps me laughing.  One time it was the ice cream truck in pursuit with the ambulances.  Another it was that Kareem Abdul-Jabbar was wearing his Lakers uniform from the waist down in the cockpit.  This time, one morning with my infant son, it was a truck dumping lamps onto the runway…for lights.  I can’t wait for what my next viewing will bring.

“There’s no reason to become alarmed, and we hope you’ll enjoy the rest of your flight.  By the way, is there anyone on board who knows how to fly a plane?”