Yes, Blacula. As in a black Dracula.  To be honest, I was more than skeptical about seeing this film for years.  I assumed it would just be cheap, cheesy horror tossed in your basic blaxploitation film.  It sort of is, yet it is entertaining, engaging and becomes a decent horror film. 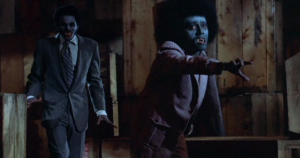 In Blacula, an African prince, Mamuwalde (William Marshall), is cursed by Count Dracula to become a vampire and intombed.  Flash forward nearly three hundred years to 1972, and two gay interior decorators bring Mamuwalde’s coffin to Los Angeles, unaware of the sleeping vampire lying inside.  When they open it, they are unleash Blacula, are bitten and become vampires themselves.  The  wave of vampire attacks through Los Angeles eventually gets noticed by the authorities and one man begins to take matters into his own hands. 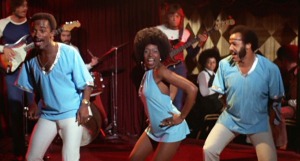 Yes, that premise sounds a bit silly, but it gets better.  Mamuwalde begins to grow on us.  He is more than a black version of Dracula, but becomes an intriguing character.  He is a classy guy blending into his new surroundings with just enough mystique to keep him interesting to everyone.  He even scores a girlfriend, Tina (Vonetta McGee), who he believes to be the reincarnation of his wife.  The classic vampire moments are played out well.  I especially enjoyed how he handles being photographed.

I believe this is the first blaxploitation film I have ever seen, and I’m not sure exactly what I expected.  It seems to check off the basic criteria for any blaxploitation film.  Most of the characters are black.  One of the most prominent settings is at a nightclub featuring a funky soul band.  The slang and costumes are all very hip for the early 1970’s. 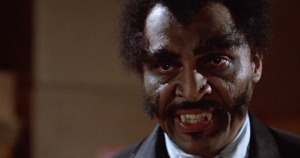 One thing that especially stood out to me, was the makeup.  I can’t decide if it is good or bad, or so bad that it’s good.  When Mamuwalde goes into full vampire attack mode, he seems to suddenly become unshaven, his face paler with more embellishments.  Other vampires have similar makeup issues.  Their faces range from white, blue or even green.  Whether it’s a poor or solid makeup job, it’s an image you do not forget.

Like I said, this is an enjoyable horror film.  To me, it is more fun than scary.  Blacula follows the basic vampire plots, just set in an urban Los Angeles black community.  The fun part is, you are actually rooting for Mamuwalde, our sympathetic Blacula.  He is the kind of vampire I would like to hang out with.  He is suave enough to get Tina to stay with him, even after she knows his sorted, cursed past.  I just wanted him to get the girl, get back to his comfy coffin and continue hanging out at the club like a classy dude.

“I live again to lose you twice.”