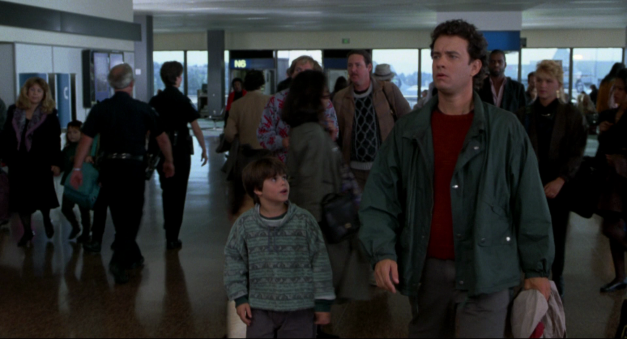 Throughout this blog I have not been shy about my dislike of romantic comedies.  The genera overall always felt flimsy, too dreamy and often insulted my intelligence.  However, there are a few sprinkled throughout film history that are so charming, sweet or just have some wow factor that makes me love romance and all dopey, drippy, silly things it makes people do.  One rom-com I watched out of a mixture of boredom and curiosity was Sleepless in Seattle.  Honestly, I did not expect to be so swept up in a story of two people whose only connection is radio waves.

The story opens on a sad image: Sam (Tom Hanks) and his young son Jonah (Ross Malinger) standing next to a casket in a cemetery overlooking Chicago.  The love of Sam’s life has just died and now he must carry on and raise their son on his own.  To help with moving on, they move out to Seattle and live on a houseboat.  After about a year and a half, Jonah can sense his father is unhappy and in need of someone new.  And Jonah could use a little motherly love himself.

On Christmas, Jonah calls a radio show, where the so-called doctor gets him to put his father on the air and open up about their loss and need for finding someone new.  All the while, thousands of people are listening, including newly engaged Annie (Meg Ryan) on the east coast.  She becomes fascinated in Sam’s story, and enthralled by his personality.  I mean, what woman wouldn’t be interested in a man who talks so sweet and highly of his late wife?  Over time, she becomes more obsessed with Sam and inches closer and closer to the idea of meeting him.

It’s this idea that initially turned me off from ever seeing this film.  Man loses wife, woman falls for man over radio, woman pursues man.  Sounds like a stalker movie to me.  But the thing is, Sleepless in Seattle knows that we are thinking just that and addresses it with humor.  Annie knows she sounds crazy and constantly seeks the reassurance of her friend, Becky (Rosie O’Donnell).  When Jonah pressures Sam to meet Annie (who wrote them a letter) Sam replies with, “Didn’t you see Fatal Attraction?”

And that brings up the best part of the movie, for me at least.  Sleepless in Seattle works off of and references many other movies, especially 1957’s An Affair to Remember.  Annie and Becky get swept up in the ending and use it as inspiration on where to meet Sam: at the top of the Empire State Building on Valentine’s Day.  I especially love the scene where Sam’s mother hears her plan and gets so emotional recalling how the movie ends and Sam responds, “That’s a chick’s movie.”  Then not a minute later, Sam and his father are moved to tears recalling a scene from The Dirty Dozen.  Perhaps that is the true division between women and men.

By the end of the film, I was not surprised to find out that Sleepless in Seattle was nominated for two Academy Awards.  The first was for original screenplay, written by the amazing Nora Ephron, who also directed the film.  The effortless fluidity of the witty dialogue is what hooked me into the film, a well deserved nomination.  The other was for the original song, A Wink and a Smile, a lovely tune that doesn’t feel stuck in the 90s.

The more I think about it, Sleepless in Seattle is not about love, but the idea and pursuit of love.  Sam had already found his love and she died.  Annie already has a fiance, but he’s… a dud to say the least.  Both of them are trying to find more for themselves and in the end (SPOILER ALERT!) we don’t know if they work out or if the romance was only in the pursuit.  But in the end we remain hopeful.  Because without that hope no one would pursue a true love and without love…well, I think both Sam and I sleep better with love in our lives.

“-Now that was when people knew how to be in love.  They knew it!  Time, distance… nothing could separate them because they knew.  It was right.  It was real.  It was…

4 comments on “Sleepless in Seattle”