The Babadook did something that 21st century horror films can rarely do to me.  It got in my head.  The ideas kept me awake after the first night.  My eyes searched the darkest corners of the bedroom.  My ears strained, praying I didn’t hear “Baba Dook Dook DOOK!”  In the morning I checked my son’s bookshelf for any new pop-up books.  And what was once my son’s cute new word, “Babadee” made me wonder if Mister Babadook had found him. 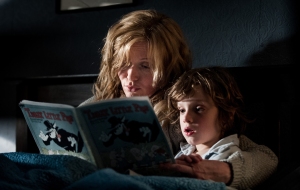 Written and directed by Jennifer Kent, The Babadook centers on a small, struggling family.  It’s just Amelia (Essie Davis) and her six year old son, Samuel (Noah Wiseman).  Sam is unusually comfortable letting strangers know that his father died while driving his mother to the hospital to give birth to him.  Amelia is obviously still grieving and it doesn’t help that her son has behavioral problems.  He gets in trouble at school, can’t get along with his cousin and has terrible nightmares, that send him to his mother’s room, keeping her up at night.

One night, Sam requests a new book at bedtime.  Amelia thinks nothing of it at first, but within the first few pages, it is clear that this pop-up book is not for children.  It is filled with scary images, like something Tim Burton and Lemony Snicket would collaborate on to give us nightmares.  And the text reads like a warning, “You can’t get rid of the Babadook.”

After reading the book, Sam’s behavior is worse than ever.  He gets expelled from school and his aunt can’t handle babysitting him.  With no one else to turn to, Amelia becomes stuck at their depressing home with Sam.  And Mister Babadook comes back, with a new ending to his book that we fear may come to fruition.

Leading up to the dramatic climax is a stretch of days where Amelia doesn’t sleep, doesn’t leave the house and descends into madness.  It’s this part of the film that can really get into your head.  During the day there are moments that make her question her sanity and Sam tests her nerves.  Once night comes, Amelia is afraid to sleep.  She stays up watching frightening images on tv.  If she does sleep, it isn’t long before something comes out of the shadows.

Visually, this film sets a perfect tone of isolation, hopelessness and depression.  Amelia’s appearance is always shabby, tired, stressed and overworked.  And what we do see of the Babadook is enough to send chills.  In a very cool, and scary moment, what we see from our monster’s perspective is even better.

The Babadook is an effectively frightening movie that doesn’t let up until the very end.  I was surprised how invested I became in this film and how scary I found it.  Perhaps mothers will find this film more frightening than others.  Or maybe you just need to find top hats and coats lying around to be truly scared.

6 comments on “The Babadook”