Most are familiar with the symbolism behind the number 666.  It is called The Number of the Beast in Revelations and is most commonly associated with the devil and the anti-christ.  In The Omen, Robert Thorn (Gregory Peck) has a child born on June 6th, but it dies.  He is pressured by a priest to take another child whose mother died.  The child is adopted, and named Damien (Harvey Stephens), with the wife never knowing that the child is not her own. 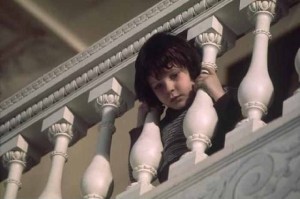 Around age six, strange things happen around Damien.  His nanny commits suicide at his birthday party, jumping out the window to hang herself with all the guests to watch.  Animals seem to be afraid of him.  And a priest keeps seeking out Robert telling him that Damien has the devil inside of him.  Could a photographer have the clues that lead Robert to discover that he is raising Satan’s own son?

The film as a whole has great tension and an ominous feeling throughout.  The moments of horrific deaths and accidents are the high notes.  My favorite is the priest’s demise.  Just after he warns Robert about his son, and that his wife is in danger, a freak storm blows in.  Lightning strikes a tree, God giving a stern warning.  The priest tries to seek shelter in a church, but cannot get in.  Then lightning strikes again and… well, I’d rather not spoil it. 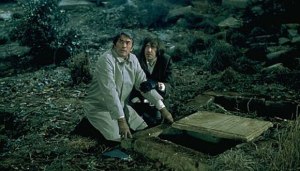 Immediately in the opening credits, Jerry Goldsmith’s music strikes you and sets the perfect eerie tone.  With lots of chanting and vocals, Ave Satani sounds like Satan’s choir rejoicing in his son’s arrival.  Throughout the film the musical themes alert us, warning us of a violent death ahead.  The music sounds like the devil inside Damien coming out more and more.  It’s no surprise that this film won the Oscar for best musical score from 1976.

There are rumors that making The Omen was cursed project.  Throughout production, uncanny accidents occurred, including multiple accounts of lightning striking or nearly striking Peck and the producer.  On the first day of shooting, many crew members were in a car crash.  The day after filming at the safari park, a trainer was killed by a lion.  And one crew member was in an accident where a passenger died in a way similar to one of the deaths in the film, only to look up and see a sign reading, “Ommen, 66.6 km.”  If these rumors are true, it seems that someone did not want this film made, or wanted to punish those who made it.

Cursed or not, The Omen is a great classic horror film to enjoy this Halloween season.  It’s a horror film that feels very rooted in realism with a mystery that Robert is compelled to solve, but we all know the truth.  You may be surprised how creepy one innocent little boy can be.

4 comments on “The Omen”