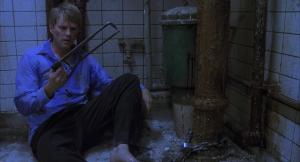 Saw begins with a simple yet terrifying scenario.  Two men wake up on opposite sides of a grimy room, chained at their ankles to pipes.  Between them is a body face down in a pool of blood with a gun next to its head.  A voice tells them that they have until six o’clock for Lawrence (Cary Elwes) to kill Adam (Leigh Whannell) or his wife and child will die and he will be left in that room to rot.  Let the game begin. 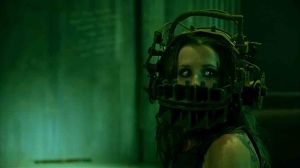 Lawrence is familiar with this style of murder by suicide in his work as a doctor.  Through flashbacks we get a better understanding of the Jigsaw murderer’s style and his previous victims.  He finds people who are not appreciating life and makes them go through horrible things to live, but they rarely succeed.  My personal favorite was the woman who would have her face torn apart if she couldn’t find the key inside a man’s stomach to get the contraption off her in time.  While Jigsaw tells you the rules, he always has a little twist or surprise planned.

Like I said, this is not my favorite kind of horror film.  However, I was surprised how much I enjoyed it.  Sure, Saw was shot quickly, on a tight budget and the acting is not great, but hear me out.  The mystery and story evolving between Lawrence, Adam and the Jigsaw murderer kept me intrigued and waiting for more.  And the moments of torture and gore were not as bad as I thought they would be, perhaps it is not until the sequels that they really crank up the ultraviolence.

“You are not a victim of this game, you’re part of it!”