I don’t remember exactly when I saw my first Star Wars movie. It was early enough in childhood that the story and characters became a constant background in my young mind.  I’ve known Luke, Leia, Han and Chewie longer than any friends I can call up.  To bring them back and extend their stories is a treasure, not just for me, I’m sure, but for every other life long fan.  And The Force Awakens does not disappoint.

In The Force Awakens, Luke Skywalker is missing.  Both the Resistance and the First Order (the leftovers of the Empire that just won’t die) are looking for him.   A map to Luke ends up with a droid, BB-8, stranded on the desert planet of Jakku.  Rey (Daisy Ridley), a scavenger girl, happens upon BB-8.  When a runaway Stormtrooper, Fin (John Boyega), finds them, he, Rey and BB-8 have to outrun the First Order and get the map to the Resistance.  There’s a lot of great action and old friends to help along the way.

While the Empire is dead, The First Order are just as threatening, if not more.  They have created another planet destroying machine, even more powerful than the Death Star.  While at first glance Kylo Ren (Adam Driver) is a Darth Vader wannabe, and General Hux (Domhnall Gleeson) seems like a Weasley brother gone bad, they are both prove to be characters we can love hating to add to the Star Wars saga.  And while we only see Supreme Leader Snoke (Andy Serkis) as a giant hologram, he is a powerful and menacing presence.

One of my favorite scenes is the only one filmed in IMAX.  It’s the grand return of the Millennium Falcon.  Visually, it is one of the best chase scenes in the entire saga.  Rey maneuvers the Falcon just above the sand and in and out of old Star Destroyers with Tie fighters on her tail and Fin swerving around firing the cannons and BB-8 bouncing around in the back.  Fin and Rey make a great team we quickly grow to love.  The incredible moves young Rey pulls in the galaxy’s most notorious hunk of junk makes us believe she is destined for amazing things. 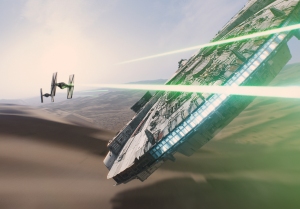 While the film is full of action, fun references for fans and intense Dark Side moments with our new villains. there is a perfect amount of heart for old fans.  The love story that was budding between Han and Leia in the previous episode now walks a delicate line between sweet and sad.  I don’t want to spoil anything, but Han and Leia have gone from star-crossed lovers to an old estranged couple whose family was torn apart from the inside.  I’ll keep my theories quiet here, but I believe we will find out more in episode VIII.  Just seeing Han and Leia again for the first time in over 30 years itself is a love story for the ages.

I could gush on and on about The Force Awakens.  It gets so much right for the fans.  It brought some nostalgia, shows some new tricks, thrills, breaks hearts, yet left me and others completely satisfied and itching for the story to continue.  Seriously, if you still haven’t seen The Force Awakens, go now.  Don’t risk letting anyone spoil this for you.