To be honest, I was not looking forward to seeing The Post, which is surprising since I am usually anxiously awaiting Steven Spielberg’s films. While I do appreciate the genre, there’s just something about films featuring hardworking, honest journalists fighting against the man that doesn’t excite me. Maybe it was Spielberg’s craftsmanship, or Streep’s intriguing character, or the way the events in the film seem to parallel recent news, but The Post has grown on me in two days in ways that All The President’s Men or Spotlight have not in years. 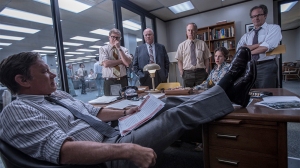 In the film, The Washington Post is at a crossroads. It is being led by a woman, Kay Graham (Meryl Streep) a first for a major newspaper. And a huge story about how the past few presidents, including current president Nixon have been lying to the public about the war in Vietnam has just fallen on their reporters’ desks. The problem is, The New York Times published about this story earlier, and is now being barred by the president for writing more about it. Should The Post risk backlash and even collusion by running their piece?

The decision on whether to publish or not ultimately comes down to Graham. She realizes all that is at stake, not only the paper’s integrity and jobs, but the how their investors will react and even the possibility of her going to prison. Scenes where Graham laments that she was never really meant to run the paper illuminate the magnitude of this decision even more. The paper was her father’s who passed it down to her husband and after his suicide, Graham had to run it, after years of not being in the workforce. 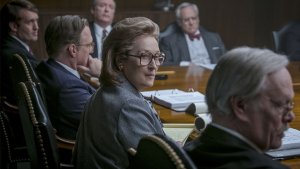 Streeps performance as Kay Graham humanizes this film as she tries to navigate what is traditionally a man’s role. She feels out of place in her position of power because that’s what she’s been taught to feel. Yet she rises to the occasion well, even if she is secretly second guessing herself at every turn. Streep’s performance is the only other Oscar nomination The Post received besides Best Picture.

One of the most striking scenes is when reporters gather with Ben Bradlee (Tom Hanks) at his home to start reading The Pentagon Papers. Ben Bagdikian (Bob Odenkirk) brings them in two large cardboard boxes, tied with rope. As the reporters dive in, they realize that none of the over 4000 pages are in any order and all the page numbers have been cut off. They work together for hours, making piles and stacks all around the room and trying to piece these clues together, while Bradlee’s wife brings the reporters sandwiches and his daughter sells them lemonade. 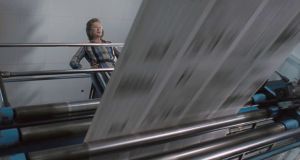 What makes this film so important, and what truly clenched it’s Best Picture nomination, is how this true story resonates with recent news under the Trump administration. The way Nixon and journalists butt heads in the film is very much like Trump’s cries and tweets of fake news at every turn. The Post shows how the government has tried to silence the press before and lost. Spielberg knew that this is the time to make The Post so he made it very quickly. While that rapid production may not have produced one of his best or most memorable films, it has solidified a spot in film history.

“In the First Amendment the Founding Fathers gave the free press the protection it must have to fulfill its essential role in our democracy. The press was to serve the governed, not the governors.”