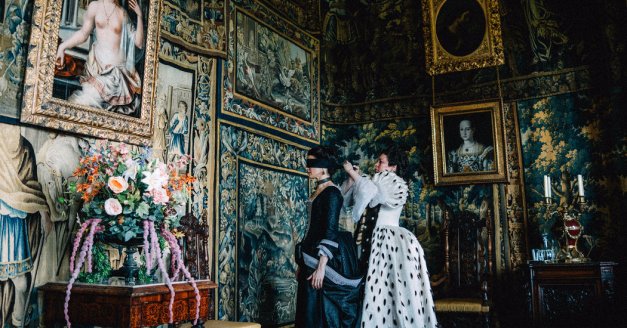 At first glance, The Favourite looks like your typical tight lipped, historically askew, British costume drama. It may look like a fancy Downton Abbey spin off, but your grandma may be too shocked and spit out her tea at times. With it’s sharp wit, intrigue, power struggles and plenty of sex, it becomes something brand new and striking. 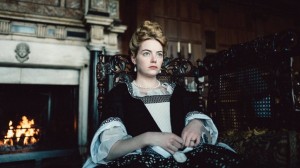 The story begins as Abigail (Emma Stone) arrives at the palace. She was once a higher class woman with prospects but now, since her father lost her in a card game, she is nothing and hopes to work as a servant. The queen’s maid, Sarah Churchill (Rachel Weisz) is a distant cousin, who lets her stay. The work is hard, laborious and Abigail sleeps on the floor surrounded by the other servants. Quietly, Abigail means to rise up. Since Queen Anne (Olivia Colman) is often ill, Sarah deals with political affairs and major decisions concerning the war with France. With Sarah so preoccupied, Abigail gains the queen’s attention and affection.Soon the queen asks that Abigail work with her as a maid. The tension already between Abigail and Sarah intensifies as they compete for the queen’s affections. And as Abigail learns Sarah’s darkest secret, she uses her power of seduction to become the queen’s favorite.

The relationship between Abigail, Sarah and Queen Anne is the main event in the story and is works wonderfully between these three brilliant actresses. What may look like a love triangle at times is a brilliant power struggle, heightened by secrecy, jealousy and whispers. Each woman has their motivations; Abigail wants to rise up and become a lady, securing her future. Sarah enjoys her political power by being so close to the queen. And Queen Anne, well I think she enjoys the attention and feeling powerful though her body has failed her so much. I could have watched these three push and pull back and forth all day.

I found Queen Anne to be the most interesting character. Being queen, people must love, revere and respect her, but it is obviously hard for them. She is not very beautiful, inside or out. She hobbles about on a crutch or is carted around in her wheelchair. She often eats things that make her sick, knowing full well the consequences and vomiting into a vase held by a poor servant. Yet she is also a very sad, sympathetic character. She obviously doesn’t have a political mind, yet is bombarded by so many decisions regarding a war we never see, only hear about. She is happiest when Abigail dances with her or on the floor with her many rabbits. And when we learn of the rabbits significance, it’s heartbreaking.

One of my favorite aspects of The Favourite are the unique camera angles and wonderful use of a fisheye lens. Many times, the camera look up at a character at a very sharp angle for wonderful dramatic effect. And throughout the film a fisheye lens is used to make a n oddly curved scene. It works wonders down that long hallway as Abigail goes by, or watching a carriage pass by at night. While this could have easily been another dry, fancy dress, big wig film, the quirky camera work and the unique characters lets it be anything but.

The Favourite is currently nominated for a whopping ten Oscars including original screenplay, cinematography, film editing, production design, costume design, Best Picture. All three leading ladies are nominated, Rachel Weisz and Emma Stone for supporting actress and Olivia Colman for lead actress. And Yorgos Lanthrimos earned his first nomination as best director. The Favourite may not being the favorite of the evening, I doubt this film will end the night empty handed.

The Favourite is the sort of film my mom would want to see and then be shocked by the content. Sex is wielded like a weapon throughout the film and we walk inside a whore house at one point. The queen is not regal, but crippled by gout and isn’t above screaming like a raving lunatic through the hallways and crying like a child. And the men, who seem pretty much useless outside of politics in their ridiculous wigs, have their fun by pelting tomatoes at a naked man.

However, in the end I believe The Favourite is about the unique brands of friendship and villainy women can create. With all of Abigail’s flattery, it’s sad how Queen Anne is quick to forget all that she and Sarah have endured together. And every woman knows a true friend will let you know if you look like a badger.

“Because I will not lie! That is love!”