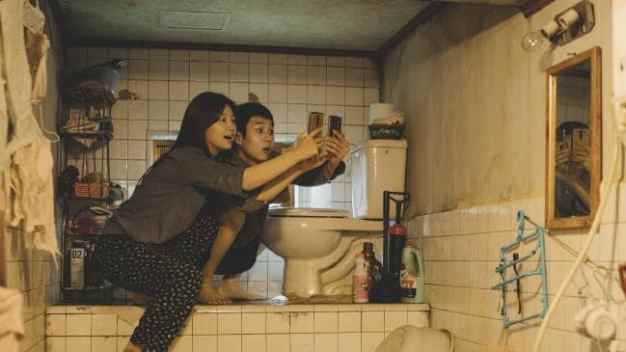 In Bong Joon Ho’s Parasite, the Kim family live in a small, filthy, basement apartment. There are stairs to up a toilet they have to crouch to sit on. It’s also the best place to get free WiFi. At their tiny table they drink beer, look up to the sidewalk and regularly see drunk men urinating right outside their window. They’re poor, take odd jobs and con jobs to survive. Then a friend brings them an odd rock that is supposed to bring wealth and the son, Ki-woo (Woo-sik Choi) fakes his way into becoming a tutor for the wealthy Park family.

The Park family lives in a spacious, modern, beautiful house. Once on their property, it’s like living in a private oasis. The elevated yard’s treeline keeps the rest of the city out. As Ki-taek works with the family’s teenage daughter as an English tutor, he finds an opportunity to get his sister a tutoring job with their young son. Then the kids get their father working for the family, and then their mother. The Kims enjoy making money off the all too trusting Park family. Then… well you’ve just got to see this movie to believe what happens next. 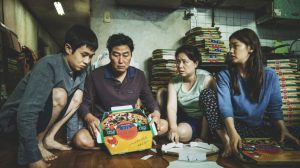 The writing in this film is phenomenal. The basic premise between rich and poor is engaging and sets the tone perfectly. Details like the way the Parks react to smell sear into our minds and affect how we perceive these characters. Every twist and unexpected turn is great, satisfying us in either elation, heartbreak or just shock. Every character is fleshed out and believable, never a simple caricature. Without giving too much away (cause seriously, do not spoil this film!) I love how there are no clear heroes or villains in this film. Every character is both flawed and sympathetic. There are great moments that make us laugh, turn away in horror and always hang on to every word.

Visually, this film is unexpectedly beautiful. I loved the shots in the rain storm, especially as the family heads back down to their basement home. The sewage water rising and sputtering, a man pushing a floating door, the power lines crossed like spiderwebs as they walk down alleys and stairs are powerful images. And with their juxtaposition between the pristine Park home we understand Ki-taek’s rage.

Parasite is a rare kind of film that is exciting to watch unfold. Please, American audiences, do not be afraid of the language barrier in this film. As Bong Joon-Ho said in his Golden Globes acceptance speech, “Once you overcome the one inch tall barrier of subtitles, you will be introduced to so many more amazing films.” No matter the language, film is universal. Plainly, Parasite is one of the best films I have seen in years.

“You know what kind of plan never fails? No plan. No plan at all. You know why? Because life cannot be planned”