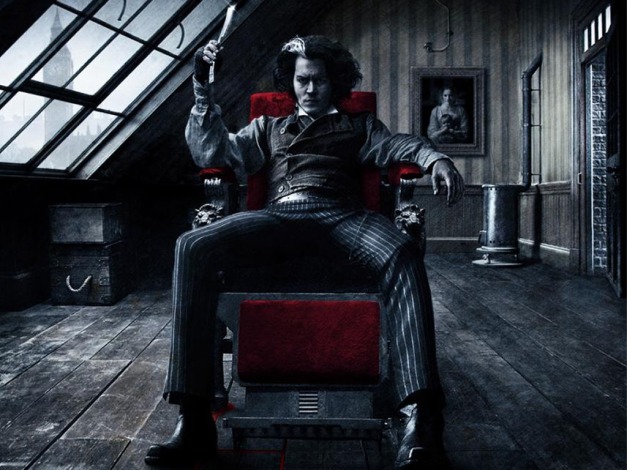 I remember well the time Sweeney Todd came to theaters.  It was late 2007, my little brother was in the height of his everything Tim Butron phase and excited to see his latest film.  Naturally, I decided to take him to see it, our parents concerned about their youngest seeing his first rated R film.  I reassured them that it was R for “just a bunch of throats being sliced while singing” and we were off to the theater.  I can’t remember if afterward, my brother was still thrilled that his first rated R film was a Tim Burton musical, but I ended up liking it much more than I expected.

Now, back in 2007, I was years away from starting this project and had little respect for musicals.  I had agreed to see Sweeney Todd for two main reasons: to spend some time with my brother and I too enjoyed Tim Burton films.  Johnny Depp’s surprisingly beautiful singing, a richly dark setting, blood-spraying murder and a bit of cannibal-consumerism were just layers of delicious icing.

As Oscar nominations approached, I honestly thought Sweeney Todd had a good chance of being nominated for Best Picture.  It was like no other film that year, bold, daring, an odd sense of beauty and a musical.  Sadly, all it was only nominated for was art direction, costume design and Johnny Depp was up for lead actor.  How ironic that There Will Be Blood beat out a movie that used so much blood so beautifully. 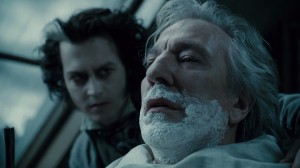 Based off the Broadway musical, Sweeney Todd takes place in Victorian London.  Benjamin Barker, the barber, had a lovely wife and beautiful daughter, Johanna, but was sent away from them on false charges so that Judge Turpin (Alan Rickman) could be with the wife.  Fifteen years in hell later, the barber returns, only to find his wife poisoned herself and daughter has been raised by the Judge.  As a young sailor, Anthony (Jamie Campbell Bower), tries to save Johanna (Jayne Wisener) from the cage the judge keeps her in, the barber sets up shop above Mrs. Lovett’s (Helena Bonham Carter) meat pie shop.  He calls himself Sweeney Todd (Depp) and seeks revenge against the Judge.  When Todd’s plan fails and he’s sure he’s lost his chance of revenge, he turns to slicing nearly every throat that sits in his chair and supplying Miss Lovett with fresh meat for her pies.

Though this is a musical, I don’t watch the film for the songs.  In fact, I don’t find them to be the kind of songs that get stuck in your head easily; they’re not that catchy.  They’re the kind of songs in musicals that mostly expand plot slowly, add emphasis to a character’s feelings or motives or create a wonderful juxdeposition between music and inpending doom.  I love the suspense as Depp and Rickman sing “Pretty Women,” while we all wait on the edge of our seat, seeing if the next stroke of the razor will end the Judge.

What I find most engaging about Sweeney Todd is the atmosphere, the characters and the visualization of the blood.  Everything in this London is so gloomy and covered in soot.  It perfectly portrays one of my favorite lines: There’s a hole in the world like a great black pit. Most of the characters fit this description as well.  Everyone is so pale, like they haven’t seen the sun in years.  Their clothes are dark, gloomy (except for Sacha Baron Cohen’s Pirelli) and at the opposite end of festive.

The visual use of blood throughout the film is beautiful.  In the opening credits, it starts a machine, lubricates the gears with a glistening, gooey and nearly neon glowing effect and runs like a torrent through the sewer.  The red blood is the brightest color you will see in the entire film.  It appears like a phantom flash on Todd’s sleeve.  It sprays and flows multiple times like fireworks and gurgling waterfalls.  I honestly found it not disgusting, but brutally beautiful.  And I couldn’t help but thinking, this is worth an R rating?

I grew up with my father calling me into the living room in time to see the severed horse head in The Godfather.  With still beating hearts bursting into flames as Indiana Jones witnessed human sacrifice.  And a child back from the dead slicing an old man’s Achilles tendon.  A little throat slicing and blood spraying does not make me think an R rating is necessary.  But until I’m in charge of the MPAA, whole generations of Tim Burton fans may be missing out on the one musical they’ll really enjoy.

“No denying times is hard, sir.  Even harder than the worst pies in London.”