Like many film enthusiasts, I enjoy the Marvel films with their colorful array of superheroes, out of this world adventures and big budget effects. They’re not always my favorite, but they are a fun escape. When I saw Black Panther I knew this was so much more than a simple superhero film. Never before have I seen such a fun and energetic Afrocentric film. This was a wake up to how immersive, thoughtful and dynamic a superhero film can be. 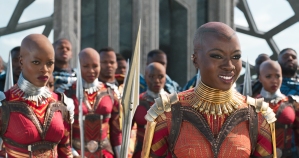 In Black Panther, Prince T’Challa (Chadwick Bosman) becomes king of Wakanda, his technologically advanced home hidden in the African jungles. His role as king comes with super powers given to him by a special herb grown by his people, and some amazing tech created by his little sister, Shuri (Letitia Wright). She’s like the Q to his 007 while keeping a playful sibling dynamic, I love their scenes together. T’Challa finds a chance to prove himself when intelligence learns the whereabouts of an old enemy, Klaue (Andy Serkis). But when the mission doesn’t go as planned, the secrets of Wakanda become compromised and an outsider comes in to challenge T’Challa for the throne.

Just like Wakanda is hidden and isolated from the world, Black Panther feels very isolated from the rest of the Marvel Universe. While watching this film, I’m not waiting for Tony Stark to drop in, nor do I want him to. When Stan Lee makes his cameo it’s nearly out of place, and a fun reminder that this is a Marvel movie. Black Panther is very much it’s own action adventure proudly displaying its unique culture, style, rules and values.

One of the most powerful struggles in this film is not the physical struggles we see between T’Challa and Killmonger or the epic battle that breaks out, but a moral question. T’Challa knows Wakanda is strong and has more than enough resources, but should he share them with the world, or keep them hidden as past kings have done? W’Kabi warns T’Challa, “You let the refugees in, they bring their problems with them, and then Wakanda is like everywhere else.” What it really comes down to is whether to honor tradition or do what is moral right, and that theme comes up multiple times for T’Challa as well as others in this story.

I cannot get through this review without discussing Michael B. Jordan’s character, Killmonger a bit. As a half-Wakandan born and raised in Oakland, his story is so important to bring fresh perspective to T’Challa. While T’Challa and his Wakandan elders have lived well and free from persecution, Killmonger has seen first hand how rough the lives of most black people around the world. He wants to use Wakanda’s resources to arm persecuted people all over the world so they can rise up against their oppressors. His ideas are born out of hatred seeking revenge, a product of American racism and Wakandan abandonment. In the end, I love how T’Challa wants to help him but Killmonger knows better, “Why, so you can lock me up? Nah. Just bury me in the ocean with my ancestors who jumped from ships, ’cause they knew death was better than bondage.”

Visually, this film is phenomenal and I cannot get enough. While most films set in Africa focus on jungles, savannahs or rough dirt floor villages, Wakanda is far from that. There are glittering skyscrapers, flying vehicles, a levitating train system. And yet it’s not all chrome and bland, instead buildings are decorated in beautiful murals, some looking like graffiti. My favorite set is Shuri’s lab, bright and glowing chrome, with a wonderfully flowing layout, with African inspired decor winding down the walls. Even when things look primitive, like spears or cloaks, there’s hidden tech powered by Wakanda’s vibranium and it is so cool. All the costumes and sets are so wonderfully inspired and colorful, there are always new details to pick up.

With my four year old’s love for superheroes, I’ve let him watch most of Black Panther. I fast forward through gun fights and he asks me to skip the ritual combat scenes, yet he loves the car chase, as do I. He loves the first scene in Shuri’s lab and now calls his socks sneakers, while stomping quietly. But something amazing happened about halfway through watching Black Panther with my son. He looked at T’Challa and innocently said, “That black man looks like my friend from school.” He named the little black boy in his class specifically. Trying not to make a big deal of it, I said, “He kinda does, doesn’t he? It’s pretty cool that there are superheroes that look like your friends.” He answered, “Yeah, and we can all be super!” I love this! My little boy is showing me how important representation is in film! And I am so happy that there is a great, cool, fun, empowering superhero movie full of strong men and women of color for him to grow up on.

“I have seen gods fly. I have seen men build weapons that I couldn’t even imagine. I have seen aliens drop from the sky. But I have never seen anything like this. ”

Film is a magic trick.  Illusions of fictitious people and places fill a two dimensional space before us for an hour or so and we choose to believe it.  It’s not real and we know it.  Many times we know how these tricks are done, but that’s not the point.  When real magic flows from the screen, you’re not looking for the trick.  You want to believe.  I believe that is the point and spirit of The Prestige.

Readers, please be patient with how vague my following review may seem.  I want to discuss The Prestige spoiler free, yet I know that the slightest mention of an event can bring an avalanche of spoilers to the unsuspecting reader.  Believe me, this film is quite a ride the first time you see it, free of any preconceived notions.

In Christopher Nolan’s 2006 film, The Prestige, we witness an ongoing feud between two rival magicians in Victorian London.  Christian Bale plays Alfred Borden and Hugh Jackman plays Robert Angier.  They first work together as plants (volunteers that that seem picked at random from the audience) in an act, but after an incident occurs, they become bitter enemies sabotaging each other’s solo careers.  Robert yearns for what Alfred has: family and an gobsmacking transported man act.  He becomes obsessed with discovering Alfred’s secret to the trick and go to many lengths to create his own transported man act, but at what cost? 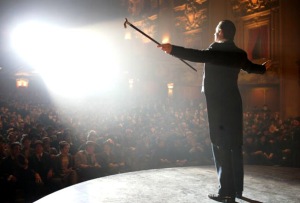 I have seen this film at least five times now, and I still find myself trying to wrap my mind around everything.  The first time I saw this, I was a bit lost at times, but always fascinated.  We are not shown everything in perfect chronological order, but rather the order to which will best pique our interest.  Like I said, Nolan is creating a film like a magic trick.  In every act he must show us the pledge, then the turn before revealing the prestige.  If it’s not leaving you searching putting the puzzle together, he has not done it quite right.

At the Oscars, The Prestige was nominated for only two awards: art direction and cinematography.  That would make you think it’s a very visual film.  It is, especially when the connections with Tesla come into play, but the strength the film carries is in it’s complexity and how it heightens our curiosity until the very end.

There are some fun, yet downplayed surprises.  David Bowie plays a role as the famed Nikola Tesla.  And only in my latest viewing did I realize that Tesla’s assistant was none other that Andy Serkis.  So nice to see him as a non-CGI character.  There is also Scarlett Johansson, as a lovely assistant, and Michael Caine as a manager connecting the two rivals from beginning to end.

I understand there is a point in the film that some people believe it breaks ranks.  Suddenly the film’s perceived reality is more than it seems.  I don’t worry about it, this film holds my suspension of disbelief.  What I always find intriguing is trying to figure out the difference between the prestige and the man in the box.  Is it really the same person?  What are the consequences?

While The Prestige is still a very young film, I believe that it is destined to become a classic.  It’s simply a tale of rivalry, but set to the era of early of magicians, like Houdini.  It becomes an intoxicating ride that twists and turns in ways you could not have expected, but love to believe.

“The secret impresses no one.  The trick you use it for is everything.”