In Disney’s latest animated masterpiece, Elsa (Idina Mezel) and Anna (Kristen Bell) are sister princesses in the kingdom of Arendelle.  As little children they are thick as thieves, especially when Anna gets big sister Elsa to use her ice powers to play and build a snowman.  But when one late night snow playtime goes wrong, Anna is seriously injured by Elsa’s power and saved by their parents visiting a clan of magical trolls.  Elsa realizes how powerful and dangerous her abilities are and feels guilty for what happened.  To protect both the girls, their parents decide that Elsa needs to hide her powers and Anna should have all memories of them erased.  For the remainder of their childhood the castle is closed to visitors and Elsa keeps to herself in her room while Anna does not understand why her sister suddenly shut her out.

When Elsa comes of age, she is to become queen and the whole kingdom is invited into their once secluded castle home.  While Anna is excited about the sudden rush of social interaction, Elsa is nervous that her powers, that have only gotten stronger despite trying to repress them, will show and scare her citizens.  Things seem to go well, until Anna asks for Elsa’s blessing in accepting a marriage proposal from Hans (Santino Fontana).  Elsa does not approve of such a rash decision, since Anna and Hans met only hours ago and in the conflict that arises, Elsa’s powers come out in the middle of her coronation ball.  As people start accusing her of sorcery and being a monster, Elsa runs away into the mountains, her ice powers going out of control and unleashing a harsh winter on the kingdom.  Anna takes it upon herself to bring her sister back so she can reverse the winter, but she needs to be careful about the friends she chooses along the way.

I don’t think I have enjoyed the music in an animated film this much since The Lion King.  Rather than a musical obstruction that feels forced in to sell a soundtrack, each song flows into the scenes and expands the plot.  Best of all, they are genuinely enjoyable songs.  Some have quirky and cute lyrics that flow well with the characters.  Do You Want To Build a Snowman is sweet with just enough sadness that grows along with the sisters, while In Summer is a pure hilarious delight of a delusional innocent snowman.  And Let It Go is a wonderful hit that feels like it could be on Broadway and sends our hearts soaring, a perfect contender for best original song.

Not to give away any spoilers, but I love, love, love how Disney has recently taken to showing the importance of love between family, rather than some token prince charming.  Frozen follows Brave’s wonderful example of showing a princess protagonist who takes matters into her own hands and is not saved by a suitor.  As a kid who grew up on the whole slew of Disney’s animated films, this recent trend is refreshing and something I grew up wishing to see.  Now with my own child on the way, I’m overjoyed at the strong young women and family values Frozen shares and plan on adding it to my personal blu-ray collection.

For the newest addition to the Disney princess empire, Frozen is a fantastic film that the whole family can enjoy.  There is a good amount of snowy action and adventure, humor for all ages, male characters that add well to the plot, but aren’t always so charming, and romance that isn’t so mushy.  And it is the perfect film for young girls, especially sisters.  Frozen has been honored with two Oscar nominations: best animated feature and Let It Go for best original song.  But the greatest honor I can give this film, is saying that I have not enjoyed a Disney film (without the aid of Pixar) this much in nearly twenty years.

“The cold never bothered me anyway.”

Snow White and the Seven Dwarfs 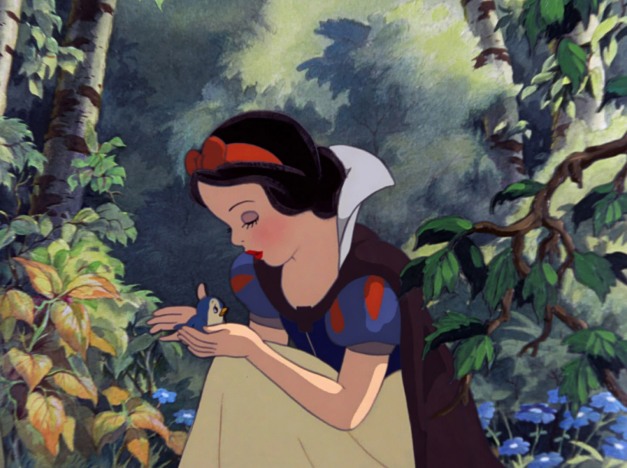 Snow White and the Seven Dwarfs has got to be one of the most innocent, pure and beautiful experiences in all of film.  It was the birth of a new kind of feature film and an insurmountable risk for Walt Disney and his studio.  I grew up with a VHS tape of the movie, and as I watched the film last weekend for the first time in nearly ten years, it was like visiting an old friend.  I knew every minute of it, could quote many lines with my favorite characters, but was happily surprised at the things I noticed and cherished that my eyes had never really caught in childhood.  Like the similarities between Dopey and Harpo Marx or beautiful panning shots that were an amazing feat in animation.  Had I not watching hundreds of great movies in the past couple years, they might be moments I would still never notice. 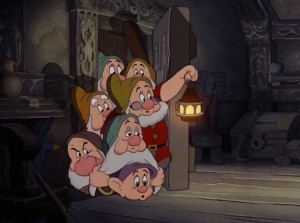 Snow White is about as perfect as an animated fairy tale can get.  Our princess, Snow White, is a completely innocent and vulnerable young girl.  She romantically meets a young prince, complete with Romeo and Juliet style balcony singing.  Her stepmother, is an evil queen with a magic mirror who informs her that she is no longer fairest in the land, but Snow White is.  The queen orders her huntsman to murder the girl out of jealousy, but he cannot do it.  Scared and running for her life, Snow White befriends some woodland creatures who lead her to a little cottage.  It’s the home of the seven dwarfs, who kindly let Snow White stay with them and vow to protect her from the evil queen.  But with her magic mirror, the queen can find out where Snow White is and with black magic she hatches a scheme to get back her title as fairest in the land.

The film and story itself is very lean.  I’ve heard in different commentaries that Walt Disney was a ruthless editor and worried that a full length animated feature would not hold the audience’s attention.  Because of that, nothing that was not essential to the story, or furthered character development was cut.  There are tales of a scene where the dwarfs build Snow White a bed and eat soup to song that just didn’t make it in.

One scene, that I personally feel pushed some dramatic boundaries that animation had not yet, is where the queen visits Snow White in disguise.  We watch with our knowledge of her evil plan and our dread grows as the queen slowly tricks Snow White into believing that her poisoned apple is a magic wishing apple.  Meanwhile, the woodland creatures and dwarfs are desperately trying to run back to the cottage in time to save Snow White.  The music is loud, fast and they fearlessly leap across ravines on the backs of the deer.  The scene cuts between the slow treachery in the cottage and the dwarfs hurrying back to rescue Snow White to create amazing tension in the juxtaposition.  Even the queen can feel it, watching Snow White take her sweet time with her wish, “Fine, fine! Now take a bite.”  By the time the scene has reached it’s climax, our adrenaline is already up and ready for the dwarfs to chase the queen.

Before Snow White, most of the animated characters that came out of Disney’s studios were not human, nor very realistic.  There was a lot of concern with Disney and his animators about making sure Snow White, the queen, the prince and the huntsman looked real and carried as much dramatic weight as an actor in a live action film.  Because animators did not feel strongly about their ability to make him more lifelike, the prince is used to his absolute minimum.  The scene with the huntsman was meticulously designed to give his character a malicious kind of weight that audiences could believe in.  In the scene where the dwarfs are crying around Snow White in their cottage, special care was taken to make sure any movement by the dwarfs reflected sorrow.  The moment where Grumpy buries his face in his hand, turns away and sobs is such a powerful moment in early animation, no one had imagined these cute cartoons could conjure such powerful emotion.

My favorite character in the film has always been Grumpy.  Growing up, my rebellious side that would rather watch horror movies than kids-stuff cartoons worked very much like he did.  The scowl and crossed arms were always just a front to hide how much we both really loved what was happening around us, “Ha! Mush.”  As I learned more about the making of this film and all the worries Disney had about it, Grumpy is an ingenious character to create.  He represents all the cynics and critics who Disney feared would look down their noses at the idea of an animated film.  But who could not fall for something as wonderful as Snow White?  Before we know it, Grumpy and the rest of us cynics find ourselves swooning, leading the rescue effort, crying our eyes out and dancing with joy.

Happily, Snow White and the Seven Dwarfs was not overlooked by The Academy.  In the year of its release, it was nominated for best musical score.  However, what people remember most of its Oscar history is how in the following year, Walt Disney was presented with a unique award.  To honor his great achievement of bringing the world its first full length animated feature that broke box office records, he received one Oscar and seven miniature ones.

Whether you’re a film buff or just trying to find a good movie for the kids, Snow White and the Seven Dwarfs is a perfect film for everybody.  There is a perfect mix of cute and sweet with dramatic and scary.  The characters are lively, beautifully animated with both hilarious gags and tender emotion.  Best of all, it’s a classic fairy tale that doesn’t pander to children or leave adults isolated on the jokes.  This is a must see for people of all ages.

“I chased a polecat up a tree, way out upon a limb.  And when he got the best of me, I got the worst of him.”