Grigoris Lambrakis was a left-winged Greek political activist involved in the Pacifist Movement and opposed the Vietnam War.  On May 22 1963, he gave a speech at a peaceful anti-war meeting.  As he left, a three-wheeled vehicle drove by with two right extremists on board, and one man beat him on the head with a club.  Lambrakis suffered brain damage and died five days later.  Though they attempted to cover it up, his assassination was connected to far-right extremists within the police and military.  The assassination of Lambrakis sparked political developments in Greece and to this day he remains a symbol of democracy and the struggle against political repression. 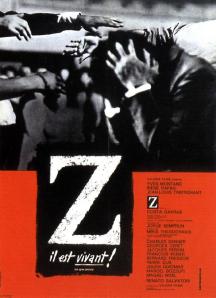 In Z by Greek director Costa-Gavras, the story of the assassination and the uncovering of the conspiracy is told in an exciting and moving way.  From the little history lesson above, you’d expect this film to become preachy and full of politics, but much of the time, they are only in the background.  What is most important here is human life and uncovering the mystery behind the conspiracy.

When we meet  the now widowed Mrs. Lambrakis (Irene Papas), the realization that this man, a historical symbol to most, was also a much loved husband is heartbreaking.  Through her, we get quick moments of her memories with her husband.  An image of them nuzzling, then she’s brought back to reality remembering the ringing from the dreaded phone call.  It’s all very simple, quick and needs no words yet effectively moving.  These small flashbacks helped Z win the Oscar for Best Editing.

The film folds out as a mystery thriller, keeping those who are not all that interested in the history or politics on the edge of their seat.  As pieces of the plot are revealed, stakes get higher and the situation becomes more dangerous for each side.  There’s a good amount of action too, it seems that anyone affiliated with Lambrakis has a target on their back.  You never know when a walk down the street could turn into a man on foot being chased by a car. 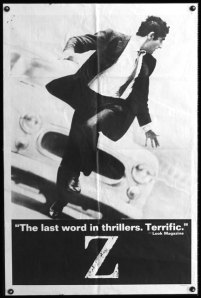 You can’t get a title shorter than Z, but it’s important to understand the meaning behind the name.  Z stands for the first letter of the Greek word Zei, which translates to “He lives.”  After the assassination, Z became a popular graffiti sign in Greece protesting against the political climate that led to claim Lambrakis’s life.  The film demonstrates this idea wonderfully just after Mrs. Lambrakis learns of her husband’s death.  We see a group of protesters paint a giant Z on the ground, they chant “Unmask the murderers” and “Police accomplice!”  Like clockwork, a group of police step in and a riot ensues.  They even try to cut the long hair off some of the men.

While I feel this is an important film that the whole world needs to see, I know most people just won’t want to.  It’s a Greek film, and therefore those who discriminate against foreign films and hate the chore of reading subtitles will instantly be put off.  But it is about the fight for democracy and justice.  The film translates so well that we can relate it to many other real life stories of assassinations and political injustice.