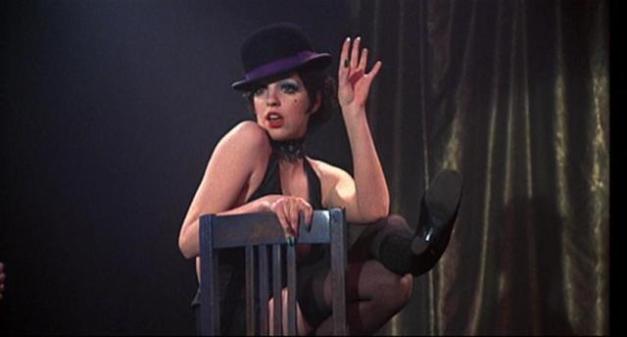 In 1930’s Berlin, the Kit-Kat Cabaret runs like a miniature Moulin Rouge with seedy characters and suggestive performances.  Sally (Liza Minnelli) is one of the club’s most popular entertainers and has dreams of moving up into films.  That is, if sex and booze don’t get her first.  When she meets the new tenant in her building, Brian (Michael York), a poor young man studying and teaching English, she tries to seduce him.  Just for fun really, since Sally is more of a gold-digger; but Brian is such a British prude that he’s hesitant, for a short while.  Later, when Sally meets the rich and handsome Maximilian (Helmut Griem), she also seduces him while being in a relationship with Brian.  Things get hairy between the three and the rise of the Nazi party only complicates it further.

There’s also Brian’s friend Fritz (Fritz Wepper), an amateur gigolo with the goal of marry an ugly rich woman.  He meets Brian’s beautiful and innocent pupil, Natalia (Marisa Berenson) and accidentally falls in love.  When the subject of marriage comes up, so does religion.  With the Nazi’s on the rise, Fritz has successfully hidden and legally changed the fact that he is Jewish, but Natalia will only marry a Jewish man.  Fritz has to make the decision to save his love or his own skin.

In portraying Sally, Liza Minnelli won the Academy Award for best actress.  Sally is wonderfully loud and crass, yet kind and seems like the kind of person who would be fun for a while, but not easy to get along with.  Her looks is a little mixed up in a good way with a young face full of needless makeup and daring eyelashes.  She has enough female sexuality radiating from her that her short hair doesn’t make her seem masculine, just confident.  The best part is that her voice is as strong as her look and she brings some memorable lines and fantastic musical numbers to life.

Of all these characters, their trials and motivations, my personal favorite was the simple The Master of Ceremonies or Emcee (Joel Grey).  He is regularly the star of many numbers at the Kit-Kat, and they often seem to serve as narration for the rest of the story.  He’s wonderfully odd, even creepy and at times can be camouflaged among the ladies on stage.  Between his distinctive voice, the care taken to his variety of facial expressions and choreography, I was pleased to see that Grey won the Oscar for best supporting actor.  Though his part was small, the impact of this character was huge and set the tone of the club and the film.

Cabaret was another musical that I found enjoyable, simply because the music was kept in believable places where such song and dance would occur, like on the stage of the Kit-Kat.  However, because the film is so different from the original Broadway production, it may not go over well for fans of the stage.  But if you’re looking for a colorful story of love, sex and the rise of the Nazi party, Cabaret is perfect.

“My God! It’s enough to drive a girl into a convent! Do they have Jewish nuns?”