Lord of the Rings: The Return of the King

My brother and I had one more trip to the Beach Theater to finish up our beloved Lord of the Rings trilogy.  Though our sister had endured the past two installments, she had had enough of our nerd time.  She missed out, big time.

Return of the King one-uped it’s predecessors in every way.  Battles were bigger, stakes higher and we knew everything would come to an amazing end.  The film makes sure to milk every second of it.  Rightly so, considering we had been sitting on pins and needles for the past two years in anticipation.

The plot to Peter Jackson’s last instalment: bringing the epic trilogy to a spectacular end.  Frodo (Elijah Wood) and Sam (Sean Astin) are getting close enough to Mount Doom to feel it rumble and Gollum is leading them into a trap.  Aragorn (Viggo Mortensen) has to man up and claim his rightful place as the King of Gondor in order to gather enough forces to protect Minas Tireth.  Along the way are breathtaking visuals, epic battles, an army of the dead and a giant spider to battle.  It’s three hours and twenty-one minutes of your eyes and ears on the verge of nirvana, even if you’re not interested in the story.  If you invested yourself in the story for the past two years, your heart is on the line as well, pounding and being pulled.  With audio, visual, mind and heart all being stimulated to a near overload at once can be quite an emotional experience.  I don’t remember if we admitted it, but I’m positive that we both cried at some point.

For those who are turned away thinking the whole trilogy is just a guy’s film, you should check out the role Eowyn (Miranda Otto), a Lady of Rohan, plays in the battle for Middle Earth.  As the men prepare for battle, her uncle, King Theoden (Bernard Hill) appoints Eowyn to lead the people of Rohan while he’s gone and should anything ill happen.  She disguises herself as a man and rides into battle anyway, bringing Merry (Dominic Monaghan) who was supposed to be left behind as well.  Reckless?  Maybe.  But Eowyn and Merry will find themselves against the King of the Nazgul, who can be killed by no man.

My favorite scenes are featuring Shelob, the giant spider Frodo and Sam to by Gollum.  Even before we get a good look at her, her lair is creepy enough to put us on edge with all those silky-sticky webs and dangling carcasses everywhere.  When that giant spider finally shows herself, she will send arachnophobics screaming.  These spider scenes have some of the greatest moments of suspense in the whole trilogy.  Though a battle between chubby little Sam and a giant spider my be funny for a moment, it is a very intense scene and we can’t help but cheer what that little guy opens a can of whoop-ass on a spider five times his size. 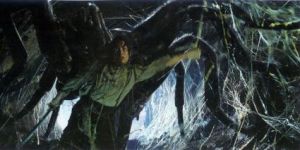 Those of us who cursed the Academy for denying the previous two installments Best Picture rights, all was forgiven when Return of the King won all eleven of its nominations, tying it with Titanic for most Oscar wins.  Of course, I like to think of the whole trilogy as one work, which give it a total of fifteen awards.  Not like I’m keeping track or anything.

So, that wraps up the first of the two trilogies that will be on this blog.  Think of that for a moment, there are plenty of film trilogies out there, a few have one nomination, but only two have earned the complete triple Best Picture nominations.  For three consecutive years, the Lord of the Rings trilogy had a big presence that only grew until the end and was the defining epic film to open the 21st century.  Who knows when, or if we will ever encounter a new trilogy to rally behind that was as well crafted as The Lord of the Rings.

“I’m glad to be with you, here at the end of all things.”