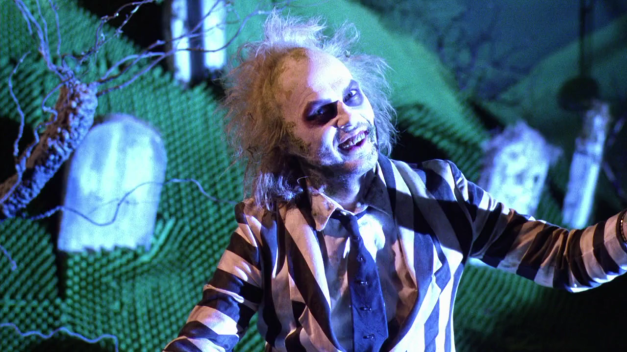 Under the wonderfully warped direction of Tim Burton, Beetlejuice is one of my favorite comedies to watch around Halloween.  In my family, the black and white stripes of sandworms and Beetlejuice’s suit are instantly recognizable.  I grew up on this film, watching it early enough that most of the more perverse jokes flew right over my head.  Today, I laugh more than ever and keep it as a staple in my modest DVD collection. 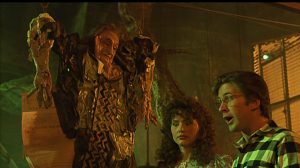 When a normal young couple die in a car accident, they become ghosts that cannot leave their home that have spent so much time decorating.  They encounter a frightening wasteland full sandworms if they step one foot outside the house.  Adam (Alec Baldwin) and Barbara (Greena Davis) are confused for a while, not quite sure if they are dead, but soon things become all too clear.  A guidebook entitled “Handbook For the Recently Deceased” is lying on their table and soon a new family moves into their house.

The new family is not at all the kind of people Adam and Barbara want to share their home with.  The mother, Delia (Catherine O’Hara) is an eccentric artist, whose work looks like half baked nightmares.  The father, Charles (Jeffrey Jones) is stressing out about trying to relax in their new quaint small town setting.  And the daughter, Lydia (Winona Ryder) is stewing in her dark, teenage misery.  It becomes apparent that Delia plans to completely redecorate the house, in a very dark fashion.  So Adam and Barbara try to scare the family away, but they are not very good at it.  Lydia, the only one who can see them, try to help Adam and Barbara, but her parents become interested in harnessing this haunting for profit.  When things get desperate, the couple calls on Beetlejuice (Michael Keaton), a bio-exorcist, who sounds like a crass used car salesman. 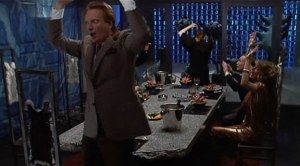 One of my favorite scenes in Beetlejuice is when Delia’s dinner party turns into a possession-dance scene.  While dinner conversation is flowing, suddenly everyone seems to lose control of their movement, singing and dancing to Day-O.  The expressions of fright and confusion on their faces are a comical contrast to how they sway and dance together.  If nothing else cracks you up, it’s when they find themselves involuntarily bending over and waving their butts towards the table.  It continues hysterically until they all sit down and enjoy one more surprise in their shrimp cocktail.

The ghoulish visuals in Beetlejuice are unforgettable and wickedly fun.  When Adam and Barbara visit the bureaucracy in the Netherworld, it’s apparent how others have died.  A woman sawn in half takes up two seats on the couch and has a bluish glow to her skin.  A man who was run over by a car hangs flat on a cable like sheets on a clothesline with tire marks over his body.  Some of Adam and Barbara’s techniques to scare off their living pests are wonderfully creepy.  They warp their faces into grotesque monstrosities, complete with eyeballs either in their open mouth or on their fingertips. The things Beetlejuice shapes himself into are always a fun surprise, whether he becomes a giant snake from the banister or a spinning carnival ride.  It’s enough to make his head spin.

“Don’t you hate it when that happens?”