It appears that 1977 was one of the best years for romantic-comedies, ever.  With two up for best picture, one taking home the prize and both bringing genuine smiles to my face, romantic-comedies from the late 70’s may have more to show me still.  Annie Hall is about a neurotic New York comedian, Alvy Singer (Woody Allen directing himself), who falls in love with a fun-loving woman, Annie Hall (Diane Keaton).  The film explores their relationship, with Alvy leading the narration in a variety of ways, from a simple voice-over, breaking the fourth wall, watching and commenting on scenes from his past and even a short animation fantasy. 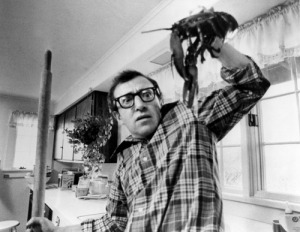 Alvy is one of those unforgettable characters that you can love, but wouldn’t want to hang out with.  He only reads books with Death in the title, enjoys watching documentaries about the holocaust and always suspects the worst in people.  He tries to compensate for all his paranoia, insecurities, self loathing and anal tendencies with a constant stream of jokes.  Alvy is a real downer in a funny way.  It seems that he is simply never happy, and there’s always something rubbing him the wrong way to complain about: a know-it-all who knows nothing behind him waiting for a movie, Annie becoming friends with her professor and the entire state of California.

Thing is, Annie seems to be equally neurotic, but in a positive light.  She’s outgoing, adventurous and willing to try new things, but always self conscious.  While Alvy is a stand-up comedian, she is a wannabe singer, well aware how terribly awkward her venues are.  In these moments, it’s Alvy who has to turn on a positive light.  But overall, the relationship is strained because both Annie and Alvy are stubborn about what they want.  And Alvy becomes jealous at how quickly Annie is progressing in therapy, while he’s been going for fifteen years with no breakthrough. 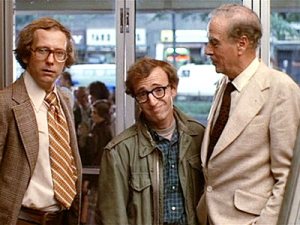 The element that really sets this film apart from the conventional romantic-comedy is Woody Allen’s charismatic way of mixing fantasy with reality.  Some of the greatest moments in the film come when Alvy is breaking the fourth wall and addressing the audience directly.  Considering that Alvy is a stand-up comedian, this comes naturally and isn’t jarring at all, the film even begins this way with a great monologue.  One of my favorite moments is when Alvy confronts the loud know-it-all behind him in line for a movie and even has the director handy to weigh in and tell the guy he’s full of crap.  The real kicker is when Alvy turns to us and says, “Boy, if only life were like this.”

Sometimes these fantastic elements help address an idea or situation in a visual way.  When Alvy is a little annoyed that Annie only makes love to him while high, she agrees to go to bed without her usual hit.  Then we see a ghost of Annie suddenly removed from her body in bed and sitting across the room watching.  Alvy asks, “Are you with me?  You seem sort of distant.”  A moment later, the Annie-ghost gets bored and asks where her drawing pad is and Alvy, annoyed, gestures towards the ghost, “You see, that’s what I call removed.”  The whole scene is simple, and completely understood with just a touch of fantasy.

The great thing about Annie Hall is that neither character is perfect, and they both realize this.  In the end, their mutual friendship is still in tact, even if their relationship isn’t.  I believe most people today would enjoy Annie Hall, it’s funny, witty with a good mix of comedic variety.  And if we’re the stoic type, that wonders why a guy like Alvy would bother trying to find love, he has the perfect joke to explain it.

Style-wise, this is basically a cookie cutter copy of One Hour with You and it doesn’t help that it also stars Maurice Chevalier.  That would be alright, but The Smiling Lieutenant doesn’t have the same silly, toe tapping feel that made me fall in love with One Hour with You.

When Austrian Lieutenant Niki (Maurice Chevalier) and Franzi (Claudette Colbert) become lovers everything is perfect and he can’t help but smile and be happy.  But he smiles and winks to Franzi as the king and princess of Flausenshaum ride by, and the princess believes that the Lieutenant was laughing at her.  The nerve!  Especially when they have felt less than welcome in their travel to Austria.  When the king asks Niki to explain himself, Niki charmingly wins them over, but perhaps too much.  Suddenly, the naive Princess Anna (Miriam Hopkins) wants to marry Niki, and he is in no position to say no.  What will happen to Franzi and Niki’s happiness?

What makes this film feel so different to a film so similar is how the main conflict is treated.  Here, when Niki does not want to marry Anna, he’s helpless and forced to.  What’s worse, is we see him broken down and sad about it.  That doesn’t make for an easy-going, fun film.  Yet, in the end, the whole conflict becomes so trivial when ***SPOILER ALERT*** we realize that Anna just needs to look the part for Niki to warm up to her.  Typical guy.

The songs aren’t so great either.  This goes back to abruptly breaking into song again.  Franzi plays the violin and Niki the piano at times, and I guess that’s a way to justify their need for musical boisterousness.  I’d happily take a duet with no vocals.

There are also two bits where Maurice Chevalier sings directly to the audience again, just like in One Hour with You.  Problem is, he does it at the beginning and the end, like tidy bookends.  But with so much space in the middle without our eyes meeting it makes it feel more awkward, forced and less personal.  With less 4th wall breaking, I also got the feeling that Niki was not as warm and friendly a person as Andre.

There’s little need to see two film that are so similar.  Unless you really love Claudette Colbert or Miriam Hopkins you’re better off with One Hour with You.

“I don’t know very much about life. I got all my knowledge out of the Royal Encyclopedia. A special edition arranged for Flausenthurm, with all the interesting things left out.”

One Hour with You

This has got to be the most charming little film of the 1930’s I’ve encountered yet.

In One Hour With You we meet a young, happily married couple: Andre (Maurice Chevalier) and Colette (Jeanette MacDonald).  It’s summarized (partially in song) how happy they are and how great marriage is.  The next day, Colette’s old friend Mitzi (Genevieve Tobin) is coming to visit.  Mitzi is one of those flirtatious girls who won’t let up once they spot a target, and she’s all over Andre in no time.  Andre tries his hardest to resist, but by the end of the night after he and Colette host a lavish party, he is in Mitzi’s arms.  He isn’t proud of it, and even asks the audience, “What would you do?”  When he hears that Mitzi’s husband is planning to divorce her over the incident he knows he has to come clean to his wife.  But she’s been having to handle the advances of another man herself.

This film is just an easy-going musical comedy, and I don’t mean that in a condescending way.  There’s something about the old-timey music and the screwy romance plot that makes you smile, relax and not take things so seriously.

Many times, a rhyming dialogue eases into a song.  That may sound strange, but it works as such a natural transition.  I’ve complained before about the sudden song breaks in 1930’s film, but this was a joy.  I honestly wish most musicals would use the subtle transition; it’s more quirky than odd, just like many other parts of the film.

There are also many scenes where Andre talks directly to the audience.  He becomes a narrator and brings his insight to whatever just happened in the scene with so much personality.  The first time he broke that fourth wall, I knew this would be a very relaxed and fun film.  And Maurice Chevalier’s heavy French accent just added to my smiles.

The plot is trite and there’s a good amount of singing, but everything made with just enough silliness that we can enjoy it.  If you’re weary about trying out a 1930’s musical, I would strongly suggest testing the water with One Hour With You.

“I am married and I like it.  Sorry to disappoint you.”