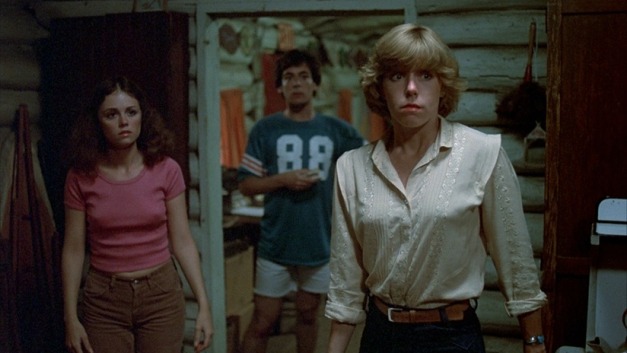 Originally created to ride off of Halloween’s slasher film success, Friday the 13th has exploded into a huge franchise since 1980. There are currently ten Friday the 13th/Jason sequels, a 2009 remake and a big 80’s bad-guy mash-up: Freddie vs Jason.  But back when the horse was alive and not beaten to a pulp, Friday the 13th was just a simple slasher film set at a camp with a bloody history. 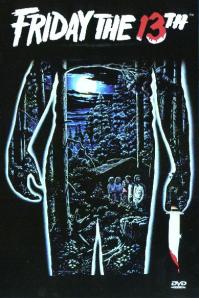 The film starts with some vague back story   We see teenage camp counselors having a sing-along.  Soon, a hormone charged couple sneaks off for some action and are killed by an unknown murderer.  The two main elements of the film are all laid out: sex and murder.

Flash forward twenty years to the present and the camp is being reopened.  As plucky, bright eyed Annie (Robbi Morgan) is strolling into town to work at the camp for a summer, the locals are uneasy about the news of Camp Crystal Lake reopening.  Besides the murder we saw, there are stories of a kid drowning and fires.  At the camp, a rag-tag bunch of late teens to early twenties kids (including Adrienne King and Kevin Bacon)are getting the place cleaned up.  One of their first scares is a black snake in a cabin, the few minutes of chaos and panic the snake causes is just a good indicator that they have no chance against a serial killer.  As evening turns to night, the counselors are picked off one by one as they separate from the group.

The camera works to create an uneasy feeling that someone is watching these people.  Many times, the camera is off in the distance, behind trees or something.  Then it starts to move and we realize that we could be seeing things from the killer’s perspective.  It’s a fun, kinda cheesy way to create some suspense.

When I get into a film, I have a history of yelling at the characters.  I had a lot of fun with this film, because these kids obviously don’t know how to survive a slasher film.  Strip Monopoly and sneaking off to have sex in a cabin, that’s fine, we need something to keep us interested while blood isn’t spilling.  But honestly, why on Earth would someone just waltz around on a stormy night with no pants on?  If these dumb girls weren’t already murdered, they’d surely wind up with very uncomfortable poison ivy.

This was my first time seeing Friday the 13th in one sitting.  From my film fascination, I knew quite a few spoilers and had seen the ending lake scene a few times.  While I found some of the acting just laughable, I got into the film enough to make it enjoyable.  The suspense was limp as a wet noodle, but I didn’t care, I was just waiting for the next dumb kid to wander off alone and meet a gruesome end.  And then I cheered about it, cause I don’t like those kids and want to see how the next will end up dead.

I would suggest seeing Friday the 13th with a group of friends.  Don’t take it seriously, laugh with your friends and raise a glass to every victim.

“It’s not bad enough to have Friday the 13th, we’ve gotta have a full moon too.”