Steven Spielberg’s Hook takes the world of Peter Pan and imagines what happened if he left Neverland and grew up.  Robin Williams plays Peter Banning, a lawyer who doesn’t put his children first.  When his family travels to England to attend a dedication for a hospital for orphans named after his grandmother-in-law, Wendy (Maggie Smith), Hook (Dustin Hoffman) kidnaps his children.  The authorities are no help and before Peter knows what is happening, he is whisked away to Neverland by Tinkerbell (Julia Roberts) so he can save his children.

Among all his problems, Peter doesn’t remember, or even believe that he is the Peter Pan from the stories.  Everyone else recognizes him, Hook, Tinkerbell, some of the lost boys. Granny Wendy even tells him how they first met when she was a girl.  When he half-heartedly confronts Captain Hook, the pirate is so disappointed that his worthy adversary is no more than an uptight lawyer afraid of heights that he gives Peter three days before they fight for the children.  With only three days to remember how to be the Pan, Peter needs Tinkerbell, the lost boys and to find his happy thought.

In this film, Neverland is imagined more beautifully than I have ever seen.  Flying in, the island seems to on a living map, with compass rose visible in the water.  Captain Hook’s ship is a magnificent vessel with a skeleton holding a sword on the bow.  The forests where the Lost Boys live is a childhood paradise with skateboarding ramps, basketball hoops and a maze of draw bridges leading to their tree houses.  And under water are colorful mermaids, who can be helpful to anyone forced to walk the plank.  It all adds to the sense of wonder and adventure that can only happen in Neverland.

My favorite scene is probably a favorite for many; the imaginary dinner scene.  Everything plays out perfectly.  After a long day of training, Peter is tired, hungry and from the looks of things, a big meal is being prepared.  Once grace is said, it’s revealed that there is nothing but steam in all the dishes and the boys pretend to eat.  I especially love how one boy pretends to eat corn on the cob.  When Peter refuses to go along with it, an insult match brew up between Rufio (Dante Basco) and Peter.  I got some of my best comebacks here, “In your face, camel cake!”  And it all builds up to Peter letting loose a real zinger, pretending with the boys and a magnificent feast appearing before him.  Never had bowls of red and blue frosting looked so appetizing.

The dynamic between Peter and his children has always struck a deep chord with me.  As a kid, I understood Jack’s frustration with his father, not showing up to that baseball game seemed like the ultimate parent betrayal.  And Maggie’s devotion to her dad is especially touching, realizing that not all kids see the obvious flaws in their parents.  Now as a parent myself, I understand how easy it can be to let little moments with your children slip away.  Never before had Moira’s words hit me so hard, “Your children love you, they want to play with you.  How long do you think that lasts?” 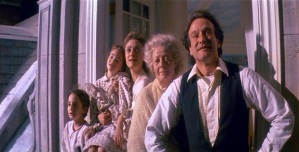 Childhood doesn’t last long, but Hook can help adults remember what it was like to be a kid again.  We need that sometimes, especially to help us better understand our children.  I’ve recently started a list of movies to share with my son at certain ages.  Hook is one we will make time for in the height of his childhood.  It’s one I hope we can enjoy and cherish together.  From it I hope he sees a world of adventure, imagination and that parents may not be perfect but the good ones will save the day.  And that he will always be my happy thought.

Unlike many animated films today, Winnie the Pooh seems to have been made for one reason: to bring back the familiar characters in some of their most classic tales with no new gimmicks.  It’s really quite refreshing and reminded me of the older cartoons I had not even thought of since I was a child.  This is by far the best of the more recent films that help to introduce a new generation of little ones to the inhabitants of the Hundred Acre Wood.  You can feel that the intentions here are pure.

The story is molded from a few of the old adventures, including finding Eeyore a new tail, attempting to save Christopher Robin from an imaginary foe and Pooh’s never ending search to put honey in his rumbly-tumbly.  There is even a scene giving Piglet his chance for bravery, referencing back to another lovable tale.  Though Owl’s fabrication of the Backson feels a little forced, children won’t notice and adults will have more to smile about to bother wagging a finger.

To old purists who clearly remember The Many Adventures of Winnie the Pooh Disney made in the late 1970’s, you may need a moment to adjust to some new voices.  I grew a little concerned by how Owl’s aged voice of wisdom was traded in to sound like a younger know-it-all, but was happy to see how all the characters remained in tact.  However, I completely approve of the more age appropriate voice for Christopher Robin and the charm John Cleese brings as the Narrator.  His interactions with the inquisitive Pooh are just as wonderful as Cabot’s.

In an age where children’s toys are cloned plastic that appear on their clothing, juice cups and sugar-coated cereals, Christopher Robin’s room is a missed part of a simpler past.  The film begins with live-action shots of his belongings, toys and bedding, all handmade.  His stuffed Pooh and friends are not the kind you’ll find in piles at the mall, but look stitched and stuffed by hand and worn with love.  The adorable still shots during the end credits rival Toy Story’s Andy for best playtime. 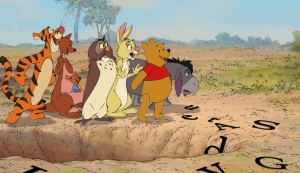 The feeling we get within C.R.’s room stays within us throughout the animated story.  Things are not fast paced.  Colors are rich but not too bright.  Jokes are simple and sweet.  This is especially wonderful in an age where children’s films often plagued by 3-D effects and resort to fart jokes or pop culture references that will quickly age a film.  In the Hundred Acre Wood, those things simply don’t exist.  That makes it a much more magical place to be.

On this blog, I don’t dabble much in pre-season Oscar predictions.  Honestly, I was just moved to write this review out of pure joy.  I have no idea where Winnie the Pooh stands in the running for Best Animated Feature.  While Pixar usually holds the front-runner, Cars 2 was not one of their best films, but fun nonetheless.  Happy Feet 2 will be in theaters next month, with another dazzling display of cute dancing penguins, but I expect another nauseating plot and too many one-liners voiced by Robin Williams.  I do believe there is a chance that the Academy could approve this sweet, hand-drawn resurrection of beloved characters, perfectly nestled in their setting, where they can interact with their storybook’s text.  And if not, I still think it’s just wonderful.