Lady and the Tramp

One of Disney’s more underrated animated classics is Lady and the Tramp.  It lacks many elements younger generations associate with Disney.  It is not a fairy tale, there is no princess and while there are songs, most of them are not big song and dance productions.  The film is simply a touching tale of love, growing pains and class differences, from the perspective of dogs. 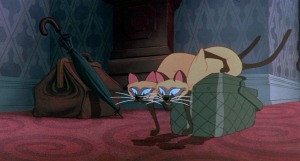 Lady (voiced by Barbara Luddy) is an innocent cocker spaniel owned by a young couple she knows as Jim Dear and Darling.  The three of them live in a beautiful Victorian house in an upper class neighborhood, complete with a fence around every tree.  When her life suddenly feels complicated as Jim Dear and Darling are expecting their first child, her friends, Jock and Trusty try to cheer her up.  However, Tramp (Larry Roberts), a mutt from across the tracks, overhears their conversation and offers an upsetting bit of wisdom to Lady, “When the baby moves in, the dog moves out.”

Thankfully, Jim Dear and Darling usher the baby into their lives without pushing Lady out, and she assumes a protective role over the baby.  But when the couple goes on vacation, leaving Aunt Sarah and her mischievous Siamese cats the look after the household, Lady is misunderstood to be a vicious dog.  In her fear and confusion while being fitted for a muzzle, Lady runs away across town, running into trouble that Tramp saves her from.  The two form an unlikely friendship budding with romance, but an unfortunate run in with the dog catcher exposes Lady to more of Tramp’s life than she can bear.  He will have to do something pretty selfless to earn Lady’s trust again, but Aunt Sarah could put his life in jeopardy. 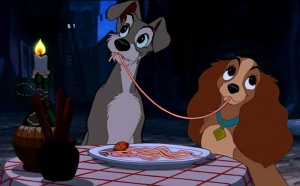 The most recognizable scene from this film is the serenaded spaghetti dinner.  As Tramp shows Lady his haunts around town, he decides that a nice dinner at the town’s Italian restaurant, Tony’s,  will be perfect.  He has built up a friendly reputation with Tony and Joe and they gladly give Tramp and his lady friend a candle light dinner in the alley and belt out Bella Note for them.  It’s sweet and Lady goes all starry eyed at the romance she has never has never known.  And the whole scene is topped off with unforgettably innocent accidental sharing-spaghetti kiss.

One of the more poignant scenes, especially for animal lovers, is the scene in the pound.  While we listen to a mournful dog a capella group howl a tune, we look around at all the poor pups locked up.  In a rickety, dark, old building behind bars and fencing, we see wet-eyed puppies huddle together in despair.  A whimpering little mutt looks out between uneven boards.  And in the middle of it is Lady, frightened and embarrassed to learn about Tramp’s reputation.  And it’s such a double edged sword to realize that she will be set free since she has a license, but the others will end up taking the long walk.

What few people realize about Lady and the Tramp, is that it was Disney’s first animated film to be made in a widescreen format.  With the rise and popularity of CinemaScope, Disney wanted to be a part of the new trend.  It was a new challenge to animators, filling the wider frame, but starting this process with a film featuring dogs looks like it was a good first step.  It was a new venture in animation that Disney took on gracefully and just another step in their technological advancement in film.  At an aspect ratio of 2.55:1, it is the widest animated film Disney has ever made.

This was also Disney’s first time working with a popular recording artist.  Peggy Lee had been singing and writing jazz hits since 1941.  In 1955, she teamed up with Disney to write and perform many of the songs for Lady and the Tramp, including The Siamese Cat Song and He’s a Tramp.  She is the voice of all the female characters, except Lady and Aunt Sarah, which includes a downtrodden sassy singing blonde dog at the pound, aptly named Peg.

Whether you’re an animal lover or not, Lady in the Tramp is a timeless classic for all ages.  Kids will enjoy the songs, Lady as a cute little puppy in the beginning and the trouble making Siamese cats.  Adults will appreciate the timeless story of class differences and the lovely details throughout the film.  And any fans of Peggy Lee will be thrilled to know that she had a big hand in writing and performing most of the songs and many of the female voices in the film.

The Robe in an epic set in ancientRomein the time of Christ.  Marcellus Gallio (Richard Burton) is a Roman military tribune who is in charge of the men crucifying Jesus.  While he and other Romans are gambling and drinking behind the cross, a red robe worn by Jesus is wagered and won by Marcellus.  As Jesus is dying, a storm of biblical proportions rises up, frightening Marcellus and the other Romans.  Afterward, the robe Marcellus won seems to burn him, so his slave Demetrius (Victor Mature) takes it away with him.

For weeks, Marcellus seems mad and has terrible dreams about that day at the cross.  Leaders of Rome suggest he seek out the robe and destroy it, believing it has bewitched him.  In search of the robe and answers, he travels toPalestineand learns about Christianity from the people who knew Jesus.

There are some developing subplots about Marcellus’s friendship to Demetrius and his romance with childhood sweetheart Dianna (Jean Simmons).  These two characters are sprouted in the beginning, forgotten in the middle and seem to be suddenly important again near the end.  Basically, Dianna is just there so Marcellus can have a girl and Demetrius brings cause for a daring rescue scene.  Later, he spawns a the sequel: Demetrius and the Gladiators.

The Robe is famous for being the first film release in CinemaScope.  This wasn’t planned, so production was shut down for a while, then all the scenes re-shot in the new format.  Like Cinerama and 3D, CinemaScope was just a gimmick.  Sadly, I think this gimmick is to blame for the films Best Picture nomination and Richard Burton’s acting nomination.  He really was wooden.

At many points, this film reminded me of Quo Vadis.  There is a lot of time devoted to driving home the simple message about Romans being brutal men drunk on power versus the more peaceful life of the early Christians.  Unless you’re a small child, this message is almost annoyingly repetitive, but not as annoyingly as in Quo Vadis.  Plus, they both turn the current Roman emperor into quite a character.

In the end, The Robe is more entertaining than Quo Vadis but nowhere near the epic caliber of Ben Hur or The Ten Commandments.  That extra dramatic clap of thunder after meeting Judas goes a long way.  Its safest audience would be within a Sunday school classroom, but could go over well elsewhere.  I guess that would put it in the higher middle rank of the 1950’s biblical epics.

“You crucified him.  You, my master.  Yet you freed me.  I’ll never serve you again, you Roman pig.  Masters of the world, you call yourselves.  Thieves!  Murderers!  Jungle animals!  A curse on you!  A curse on your empire!”