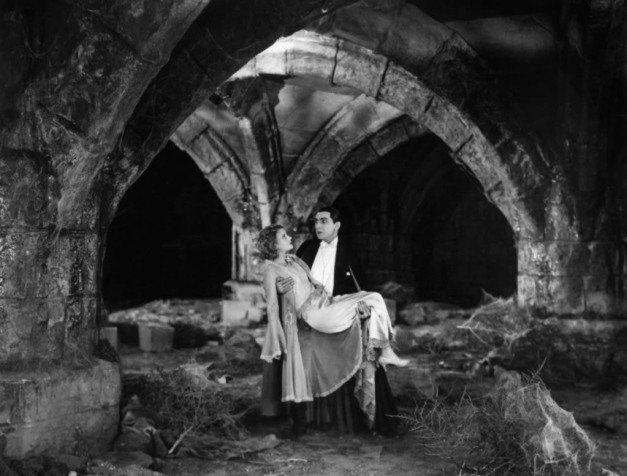 A cornerstone in Universal’s classic monster movies is Dracula from 1931.  Starring Bela Lugosi, the haunting images and story exposed a wider audience to Bram Stoker’s work and vampire lore.  I grew up with classic vampire images based off of Lugosi’s character and rubber bats on strings every Halloween.  To this day, nearly every generic vampire impression (anything Twilight related never counts, obviously) is based off of Lugosi’s voice, movements and looks. 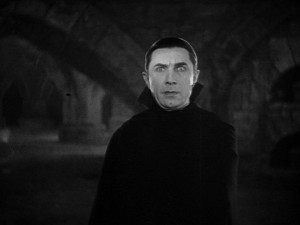 The film begins with Renfield (Dwight Frye), a young man traveling to Dracula’s castle.  On the ride there, all the locals warn him against going.  One old woman even gives him a crucifix.  When he arrives, Dracula’s castle is quite a sight.  The place is a mess, with armadillos wandering in piles of dusty junk and giant spiderwebs sprawled above the stairs.  Renfield can tell something is amiss when it seems that his host has passed through the thick webs without disturbing a single strand.  Unfortunately, he doesn’t turn back and Dracula turns him into a slave, somehow getting him and his coffin onto a ship to England.

Once in England, Renfield is found on the ship and thrown into an asylum while Dracula strolls around town at night like a classy gentleman, complete with a top hat.  It seems that he has a taste for young women.  After sampling a few, Dracula sets his sights on Mina (Helen Chandler), stalking her room and gaining easy entry transformed as a bat.  Mina’s concerned father, Doctor Seward (Herbert Bunston) becomes concerned about his daughter and calls for Dr. Van Helsing (Edward Van Sloan) to investigate.  It isn’t long before Dracula and Van Helsing meet and legends and folklore become reality. 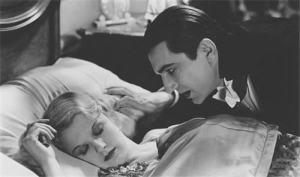 Since I was a small child, there have always been two creepy images from this film that stand out to me.  One is when Dracula is slowly creeping toward Mina asleep in bed.  His hand leads, fingers curved slightly, like a claw.  His face is frozen and fixed on Mina’s, most of his body is shrouded by the dark cape.  He bends over gently, like he could be a benevolent father kissing a child goodnight, but we know he’s about to viciously suck the blood from her neck.  As  kid, I was thankful for having the top of a bunk bed so no one could bend over me like that while I slept.

The second image is Dracula’s hypnotic stare.  This is shown many times throughout the film, with some variation (in a courtyard, with a top hat, without the top hat).  Basically, it’s just Lugosi starring straight ahead with tiny lights shining into his eyes.  This makes his face seem brighter and much more pale, like it glows in the dark.  And his eyes are huge and white with a weird glint that will command you do whatever he asks.  It’s always been one of those images that I could never look away from; truly hypnotizing.

Do the world a favor and show your kids Dracula before they ask awful questions like, “Does he sparkle in the sun?”  This classic version of Dracula can be the perfect film to first expose kids to vampires.  It packs enough scariness with images that are not violent while bringing out classic vampire lore.  Kids will get their fill of creepy castles, coffins, rubber bats flapping around without the blood splatter and hypersexualized images that come with more recent versions.  Plus, Frye has some creepily fun scenes as a raving lunatic under Dracula’s control that kids can really enjoy.

“Listen to them.  Children of the night.  What music they make.”