There are few comedies that have stood the test of time as well as Some Like it Hot.  With Billy Wilder’s writing and direction, the pacing is as snappy as the gags. With Jack Lemmon and Tony Curtis as a pair on the run resorting to disguising themselves as women, the laughs come frequently and easily.  And with the unforgettable Marilyn Monroe steaming up the screen and complicating the duo’s plan, we are in for a wild and delightfully screwy ride.

Joe and Jerry (Curtis and Lemmon) are two musicians who had just found work in Chicago, but when the police bust a speakeasy run by the notorious mobster Spats Colombo (George Raft), they are out looking for work again.  They hear of a band heading to warm sunny Florida looking for a bass and a saxophone, perfect!  Only problem is they are looking for women.  Then Joe and Jerry witness Spats and his boys whack a few guys off.  Desperate to get far from Chicago, they disguise themselves as a couple of chicks and take jobs in the all girl band, where Sugar Kane Kowalczyk (Marilyn Monroe) is the lead singer/ukulele player.

Watching Curtis and Lemmon try to be girls is a hoot.  Just the image of their man-shaped calves trying to stay afloat in heels puts me in stitches.  When Lemmon realizes he is a disguised rooster in the hen house, the temptation is almost too much.  The slumber party side of these girls suddenly coms out, and suddenly he is not too happy about having a dozen pretty ladies in his bunk.  Down in Florida, the shoe goes on the other foot and the boys have to deal with men pursuing them.  Lemmon on his tango date with the short millionaire Osgood (Joe E. Brown) are some of the funniest moments in the film.  And the bellboy who hits on Curtis is wonderfully outrageous, “That’s the way I like ‘em, big and sassy!”

But the greatest treat in Some Like it Hot is Marilyn Monroe.  She is the perfect woman, complete with a flask strapped to her thigh, a weakness for saxophone players and can lob back one liners with natural ease.  Her presence on the train makes our boy’s disguises much more difficult and inspires further identity deception when Curtis disguises as a young millionaire to lure her in.  Isn’t it funny how a girl can seem so innocent to sex, yet the very icon of it.  That is the hook of Monroe’s charm, especially in the scene where she sings, “I want to be loved by you.”  Her dress is practically see through, just barely covers and the spotlight hovers just above her neckline, tantalizing those trying to get a better look.  She is what boys dream of and acts like she doesn’t even know it.

Really, the film is all about sex, but Wilder could not just come out and say in in 1959, so it is disguised with this tale of men in hiding.  Whatever, Spats and his gang are only really interesting if they kill our heroes or bring in new girls.  Joe lusts for Sugar.  Jerry is being lusted over by Osgood.  And sweet Sugar seems to think she only wants money, oh silly girl.

When it came down to the Academy Awards, Some Like it Hot came up with six nominations (Best Writing, Cinematography, Director, Art Direction and Lemmon for Best Actor), winning one award (Costume Design).  But for the Best Picture category, things were kept to a more serious crowd.  That has not effected this film’s fame or love, however.  AFI ranks Some Like it Hot at the top of their 100 Laughs list.  Today, all generations are still busting their guts over this glorious gem of classic comedy.

“Story of my life.  I always get the fuzzy end of the lollipop.” 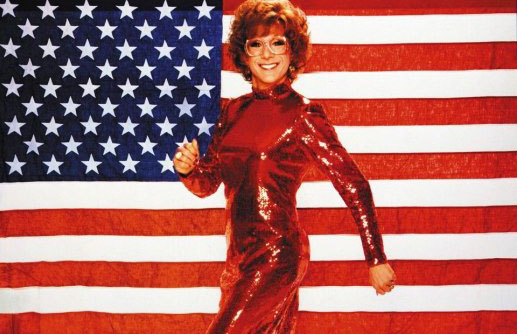 In Tootsie, directed by Sydney Pollack, Dustin Hoffman plays Michael Dorsey, an out of work actor in New York with a bad reputation.  The reputation comes from being difficult and taking stands against simple direction on stage.  He’s also an acting coach, his speeches give great confidence to inspiring actors, most of them also out of work.  One of the best things he tells them is, “Don’t play a part that’s not in you.”  Then he disguises himself as a woman, tries out for a role on a daytime soap opera, and gets it.  Suddenly, Michael is leading the lives of both Michael Dorsey and Dorothy Michaels

It’s isn’t enough for Hoffman to play Michael as Dorothy, but rather gives Dorothy a whole different personality.  In the story, we can credit this as Michael being a great actor, and really, it’s just Hoffman being a fantastic actor by not letting us see the layers.  While Michael is a bit of a schemer, womanizer and can loose his cool quickly, Dorothy is much more collected, kind and can command with a fiery elegance many women cannot attain well.  Perhaps Michael’s masculinity helps Dorothy pull that off just right.

A story of a man disguised as a woman is rarely done so well.  Usually, it’s only a gimmick that results in nothing more substantial than some mildly amusing situations of sexual awkwardness.  Here, there’s a compelling story driven behind the two halves of Hoffman that awakens some thoughtful social commentary as well as hilarious situations, ranging from Hoffman’s sudden voice changes to some Auntie Dorothy babysitting time.

Michael soon finds some unexpected female roles that come along with being Dorothy.  One of his first days on the show, he sees he has to do a kissing scene with the show’s doctor.  The look on his face when Julie (Jessica Lange) tells him, “We call him The Tongue,” is priceless.  Cunningly, he uses Dorothy’s strong, commanding side to improvise his way out of the scene.  It’s moments like that that bring Dorothy Michaels fame and launch her to become a modern icon of the strong proud woman.  But is Michael up to the responsibility of being a strong, female role model?  As much as he’s learning about being a woman, he is not a woman, yet he’s feeling a new kinship to women, but doesn’t realize the damage he could do with it if his lie is exposed.

There’s also the platonic relationship Dorothy forges with Julie, while Michael is attracted to her.  It’s this double-edged sword that gives Michael a chance to get to know Julie better than he probably would have known her as a man.  But we’re afraid that the friendship, trust and safety Julie feels with Dorothy can only be broken if the truth about who she really is comes out.  It’s really astounding how well this odd love triangle of multiple personalities pulls at our hearts and minds where there isn’t one person of the three that we find complete fault with.  We’re rooting for everyone, knowing that they can’t all win.

“I was a better man with you as a woman than I ever was with a woman as a man.  Know what I mean?”