Around the time Jerry Maguire was released to theaters, I had turned to my little radio-alarm clock nearly every night to listen to the local pop music station.  Honestly, I didn’t care for the music, Macarena still makes my teeth itch, but I had a different agenda for tuning in.  Around me, the fifth grade was turning into a tougher social environment.  I the shortest kid in class, a huge bookworm and had suffered a recent case of lice, thanks to my sister.  She was young enough to be immune to its stigma, but not me.  I needed something to keep me “cool” and that annoying Spice Girls song all the tall, pretty girls knew all the words to drove me to listen and learn all those mid 90s pop songs.  Bruce Springsteen’s Secret Garden was on a few times every night, usually a request for the remix with the cheesiest lines from Jerry Maguire spliced in.  Check it out here: http://www.youtube.com/watch?v=JAo7AK5aTBY I had no images to link the actor’s lines to, but I still gagged and rolled my eyes at the end when Zellwegger finished the song with the teary “You had me at hello.”  I just prayed Wonderwall would play next.

So I was less than excited to finally watch Jerry Maguire.  However, it was more interesting and entertaining that I expected.  Jerry (Tom Cruise) is an agent for professional athletes who has a moral epiphany.  He realizes that he is all fast talk and bull shit, so he feverishly writes an extensive memo from his heart and sends it to every employee in his company.  The main idea: take on fewer clients in order to have a more personal relationship with them.  Unfortunately, the company doesn’t agree with his new ideas.  They easily fires him and he loses all but one client: loudmouthed wide-receiver Rod Tidwell (Cuba Gooding Jr.).  As Jerry makes a scene leaving the office, he asks if anyone wants to go with him and run an honorable company.  Sweet little Dorothy (Renée Zellweger) gets caught up in the moment and goes with Jerry.  She quickly realizes that her impulsive decision was probably not the smartest, considering she has a young son to take care of, but hey, we need a way to hook her up with Jerry.

Dorothy lives with her sister, Laurel (Bonnie Hunt), who hosts a group of angry women regularly.  From what we’re shown, they seem like the she-woman-man-hater’s club who feed on chocolate and their own tears.  When Jerry comes into the picture, Laurel is disapproving, but Dorothy is instantly in love.  Gag me.  As the relationship fluctuates, Dorothy becomes more susceptible to the negative views on men that radiate from the hens in the living room.

The love story is an eye-roll, but at least Dorothy has good intentions for clinging to Jerry.  Turns out, her cute little, spikey-haired son and Jerry take a liking to each other instantly.  Perhaps they need each other, Jerry could become a decent father figure and little Ray (Jonathan Lipnicki) is a good listener.  Seems like Jerry got in his situation in the first place by just needing to have a voice. 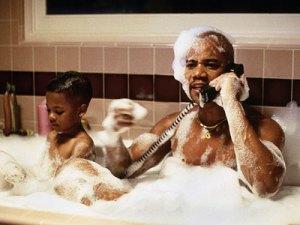 What saves this film, is Cuba Gooding Jr.  As Rod he commands every scene with his loudmouthed proud athlete attitude and I loved every minute of it.  He just seeps so much energy and passion it’s contagious, especially in the “Show me the money” scene.  Most lovable of all, he’s a family man.  As I held my breath in the Monday Night Football scene, I understood why Cuba won the supporting actor award.  Rod and his family were the only people I truly cared about in this film.

“I got a shelf life of ten years, tops. My next contract’s gotta bring me the dollars that’ll last me and mine a long time. Shit, I’m out of this sport in five years. What’s my family gonna live on? Huh?”