While in Paris to sell some jewelry for the government, three Russians get distracted when they justify checking into a suite at a swanky hotel because it has a safe large enough to store the jewels.  They settle into their lavish suite, enjoying the western capitalist comforts, until a  higher ranking official is sent to straighten them out, Ninotchka (Greta Garbo).  She is a no-nonsense woman, bland and only thinking of essentials.  When she happens to meet Count Leon (Melvyn Douglas), he is instantly fascinated by her, at first for the novelty of being a proud Russian, then for her womanly charms that she hides so well.  Romance seems almost foreign to Ninotchka, and as she warms up to Leon, ideas of Western culture do as well.  But the romance is complicated by both the jewelry exchange and Ninotchka’s beloved Russia.

I’ll admit, I had my doubts wondering how much I could believe in seeing a a strict Russian comrade turn into the sort of girl who drinks pink champagne in silly, yet fashionable hats.  However, this turns out to be Garbo’s greatest role and she is in complete control of the film.    She displays her wonderful range between her straight-laced introductions to being happily drunk and in love, while not completely forgetting her character’s Russian roots.  That scene where Leon first gets her to laugh, it’s like seeing a flower bloom.  Suddenly I could see through that Nurse Ratchet hairstyle and see a soul, and a beautiful one at that.  “Garbo Laughs” was the tagline to promote the film, but the best part is that we laugh with her.

Now, I can see the contrasting ideas between Eastern and Western culture either bringing some hearty laughs or leaving people feeling  a little uneasy.  The film makes some great jokes, most of them at Russia’s expense.  When first meeting Ninotchka, Leon says, “I love Russians! Comrade, I’ve been fascinated by your five-year plan for the last fifteen years.”  He love to cleverly sneak in a quick punch to Russia in between his flirting all through the film.  Soviet Russia is an easy target for a cheap laugh, and the film throws a lot of bulls-eyes.

On the other hand, it can seem that capitalism and Western culture are just seductive to the faithful Russian people.  At first, Ninotchka seems content with her strict Soviet upbringing, but soon we see that she was living in ignorance.  Was she ever happy before, or is this film saying that women cannot be happy until they are dressed in the latest fashions with a man on her arm and drinking pink champagne?  The film seems to make us think that all young people of Russia are just pining for the pretty things they can get in Western culture.

I digress, it can be easy to over analyze this film, but that is not what we are suposed to do.  It is simply a fun romantic comedy that is smart enough to raise these cultural and social issues and use them to bring even more laughs.  We can partially blame the great Billy Wilder for writing this witty, Oscar nominated screenplay.  See it for Garbo’s amazing performance, not for Soviet Russia jokes.

“I should hate to see our country endangered by my underwear.”

Love is a Many-Splendored Thing

Here’s another love story where William Holden can’t keep his shirt on.  Set in Hong Kong towards the end of the Chinese Civil War, Suyin (Jennifer Jones) is a Eurasian doctor and a widow.  At a party she meets Mark (Holden), a foreign correspondent from America reporting on the War.  Despite the fact that Mark is married and Suyin is happy with her life as it is, they fall in love.  It seems there could be no greater happiness for them, but Mark’s job pulling him all over the world could spoil everything.

What makes this more interesting than just a love story is the conflict between Eastern and Western cultures.  Suyin is a perfect example of the divide, being half European and half Chinese.  She’s a doctor, a respected intellectual, yet she will still keep faith in old Chinese superstitions.  There’s a fun scene where people make noise to scare clouds away from the moon and she might have too much faith in a later fortune teller scene.  When she’s faced with the idea of romance with Mark, there is conflict between a reserved life alone in memory of her late husband or to start over with new passion.

We see other Eurasians who have assimilated so deeply into their European side, you can hardly see their Chinese heritage.  Suzanne has dyed her hair blonde and takes pride in being mistaken for European.  Suyin is a little heartbroken that someone can just do away with a whole half of their culture.

When Suyin goes back home to China for a family emergency, we see just how different the cultures are.  She must ask her uncle, the head of the household, permission to do anything.  And every little detail is done with such reserved tradition, we can tell Suyin is not quite used to it after so much time in Hong Kong.

When Mark and Suyin decide to tell marry and tell everyone about their love, the reception isn’t exactly joyous.  Suyin’s Chinese family is not happy about bringing a foreigner into their family, but decide not to hold her back.  Their European friends in Hong Kong also give Suyin fair warning about their cross-cultural relationship.

The romantic scenes between Holden and Jones are layered with cheesy mush.  They lay out all these mushy lines, but they hardly feel real.  It’s like they’re talking to a plank of wood, rather than a lover.  Perhaps the rumors about their strained relationship off set contributed to this.  There are stories about Jones chewing garlic before her romantic scenes with Holden.  Trying to act in love through garlic breath might have put a damper on his lines.

In the end, this is an interesting story of culture and an eye-rolling romance.  My biggest complaint isn’t about Holden’s shirtless strutting, but the fact that he shaved his chest for that beach scene and made us look at his hairy thigh in the foreground the whole time.

The King and I

Sometimes it is hard to tell people that I really don’t care for anything with the Rodgers and Hammerstein seal of approval.  I see their eyes light up and reminisce about how innocent, colorful and quaint those films are and I hold my tongue and nod.  Who am I to stomp on beautiful memories?  But I have finally found common ground, The King and I brought real smiles to my face and never once let my eyes roll. 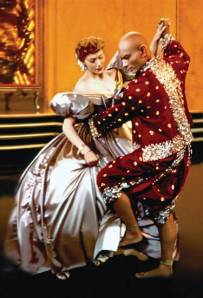 The film is a musical tale about a widowed mother, Anna (Deborah Kerr), who has traveled to Siam with her son to be a teacher to the King’s children.  Right away there’s the anxiety that comes with being so far from home and culture clash around every corner.  When Anna first sees the King (Yul Brynner), he is being presented a young woman, Tuptim (Rita Moreno), as a gift.  Later we learn that Tuptim is still in love with a young man and they hope to escape.  Anna meets about half of the Kings children and wives and starts to build a loving relationship as their teacher.  But as the children learn, they bring new questions to their father, who doesn’t know how to answer them.  He becomes more curious and wants to learn as well, but is so deeply rooted in his old traditions and the culture he is the center of.

When the King is informed that people say he is a barbarian, he feels the need more than ever to learn Western culture.  Visitors are coming from England and the King plans on hosting a banquet to prove that he is very civilized.  All the wives wear European style dresses, dinner is served with forks and Tuptim translates Uncle Tom’s Cabin into a Siamese ballet.

The story about Tuptim mirrors that of Uncle Tom’s Cabin and the King has a hard time realizing that he is the villain in that sense.  It becomes a culture shock revelation that the King can’t handle.

There are some hilarious scenes all through this film.  The King is always full of laughs and his little misunderstandings can leave Anna lost for words.  When they’re discussing the Civil War going on in America, the King wants to send elephants to “Mr. Lingcong” as aid.  The rule that no one’s head can be higher than the Kings spurs an odd game at times.  And there’s also an absolutely side-splitting moment when the wives first meet the British Ambassador in their new dresses. 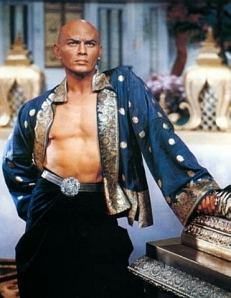 The number one reason I enjoyed this film is the wonderful performance by Yul Brynner.  He’s so wonderfully odd and animated, yet royal and distinguished.  The way he conflicts between his kingly power trips and his natural curiosity is fun and engaging.  Somehow it’s naturally part of his personality how he always seems to be posing (hands on hips or sternly crossed over his chest and feet always shoulder width apart) and his face is always full of expression, if he had hair it would be too much.  I didn’t care too much for his singing, but that hardly seems to matter in this performance.  And to completely rock a new open shirt and hammer-pants in every scene takes some serious presence and Brynner brings it spectacularly.

It is absolutely brilliant to put the themes of such culture into a musical that can be loved by all ages.  There are scenes light and simple enough for children to understand and yet adults can realize how deep these themes can go.

It’s nice to know I can finally breathe easy when someone pulls the Rodgers and Hammerstein’s card in a conversation.

“I make mistake, the British not scientific enough to know how to use chopsticks.”