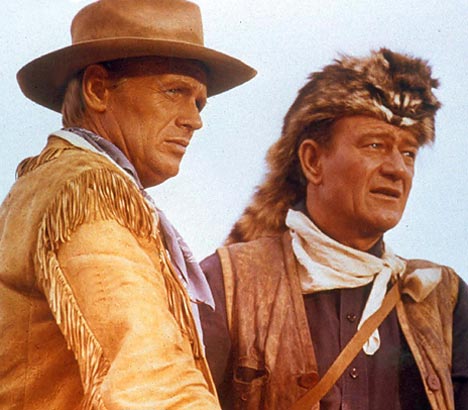 In John Wayne’s directorial debut, The Alamo showcases the historic pivotal battle in 1836 against Santa Anna’s troops in the war for Texas independence fromMexico.  As General Sam Houston (Richard Boone) is in need of as much time as possible to muster enough troops to defeat the Mexican army, he orders Col. William Travis (Laurence Harvey) to defend the Alamo, a small mission blocking Anna from reaching Houston.  To help Travis, Jim Bowie (Richard Widmark) and Davy Crockett (John Wayne) arrive with their men ready to fight.  As the men wait at the Alamo, they watch the Mexican army grow larger and with more firepower than they could ever hope to hold back.  The decision becomes whether to flee or stay and die defending, and the men make the most honorable choice.

This film is done well from a visual standpoint.  The sets, costumes and props all look historically accurate and quite elaborate.  The large replica of the Alamo is absolutely wonderful and the small town set was reused in many later films.  The action scenes are invigorating and exciting.  From cannons blasting to bayonets stabbing, the violent action helps resonate the implications of this historic moment.

I believed what I was seeing, until the characters sucked the legendary history out of everything.  You see, I believed their story, their situation and never doubted their heroics.  I respected their honor and bravery as they decided to stay and fight.  But when not in battle, as real people -talking, having conversations and showing a fleshed out human side- they become childish, and not leaders crucial to Texas Independence.

Part of me hates to say this, but at times this film makes it feel like these men are in the middle of a fantasy cowboy camp hosted by John Wayne.  I want to, but it was hard for me to respect these men.  They had fistfights in the middle of the road for no reason.  There was not much order or structure and everything seems to be about being the manliest man there.  It felt like they were boys for two hours and men for forty minutes.  That’s not a good ratio, Duke.

Much of the time, there is a reverence missing from these men.  We hold the the tale of the Alamo as an important example of sacrifice, bravery and honor.  I understand these men are human, only human and will be imperfect.  But there was something missing from these characters.  I wanted them to make me feel like this was more important than just playing Cowboys and Indians.  Some of the leading characters explain how important this is, but it wasn’t shown well through most of the film, and that’s a huge fatal flaw.

John Wayne poured his own money into The Alamo and made it a real labor of love.  His goal was to bring to life a proud moment in American history about sacrifice for a greater good and standing firm against overwhelming odds.  In 1960, I think that went over well with audiences, but today, I don’t know if most of us can take it as seriously as Wayne wanted us to.  However, it still holds up as a great Western.

Simply put, if you’re a John Wayne fan or love westerns, maybe you will love The Alamo and should forget my harsh words.  But if you can’t stand shotty character development, petty moments fueled by excess cowboy testosterone or the thought of a real life hero like Davy Crockett reduced to the Duke, then skip it.  Mr. Wayne, thank you for the valiant effort in bringing an important piece of American history to life, but you look ridiculous.

“Step down off your high horse, Mister.  Ya don’t get lard less’n you boil a hog!”