Children of a Lesser God

Through high school, I volunteered in my little brother’s Sunday school classroom, specifically helping a young boy who was partially deaf.  Every week from his first grade through fourth grade, I sat by his side helping him with his work so that he could complete his sacraments of Eucharist and Reconciliation with the rest of the class.  I didn’t have any training for this, we just had to wing it and learn naturally from each other.  That first year felt like a struggle nearly every week, I don’t think he liked me, or the thought of someone helping him, for a while.  By the end of fourth grade there was a connection and gratitude between the two of us.   I remember moments where he felt so different from the rest of his class and others where he surprised all of us, including himself. 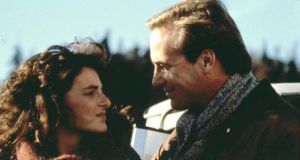 In Children of a Lesser God, William Hurt plays James, a new speech teacher for a small group of teenagers in a school for the deaf.  With his excellent credentials and energetic teaching methods, he quickly becomes a hit with both his students and the staff.  He starts to notice the one person who doesn’t want anything to do with him, Sarah (Marlee Matlin).  She is a custodian who was once a very bright pupil at the school.  Sarah does not speak and refuses to learn when James offers to teach.  James tries to just be friendly with Sarah, and he eventually falls in love with her.  As their relationship progresses, things turn into an emotional power struggle where James does not realize how he is trying to change Sarah and hold her back from the world at the same time.

There are two main themes of this film, love story and deaf issues.  It isn’t long into James and Sarah’s relationship that we realize James does not know how to deal with both themes at once.  Living with a deaf woman makes him feel guilty listening to his Bach records with her around.  His job is to teach the deaf to speak, but Sarah becomes quickly offended when James accidentally tries to get her to read his lips.  It’s hard for James and Sarah to be equals with James feeling like he has to walk on eggshells and Sarah feeling like she isn’t equipped to be her own person.

The deafness becomes a barrier between the two, and James is just trying to bluntly force his way though.  It does not work like that.  They have to find a common ground, as James puts it, “Do you think there’s someplace where we can meet that’s not in silence and not in sound?” 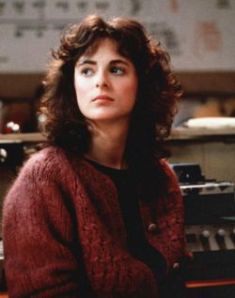 This was Marlee Matlin’s film debut and she became the youngest person to receive an Oscar for Best Actress.  Her portrayal of Sarah is so intelligent and insightful, yet very raw and honest.  Though Hurt’s character is casually interpreting her sign language for us, we see the emotion before the words and immediately understand.  There is so much intelligence behind Matlin’s expressions and her eyes show a much deeper soul than I have come to expect from films in the 1980s.  And when she dances, she feels the same drum, but shows us a new smoother step.

One of my favorite scenes in the film is the class’s performance during the school’s open house.  Think about ‘80s music, it was an image that teenagers could all find common ground with.  While these kids are deaf, we learn that music isn’t completely lost to them.  James teaches the kids the words and they find the beat.  Their performance isn’t about musicality, but the ability to express and be a part of music, where most people would count these kids out.  The confidence James instills in the kids just radiates out of them and we celebrate the performance with them.

While Children of a Lesser God is mainly a love story about balance and acceptance, I found myself most connected with Hurt’s character while in his classroom.  Sadly, I have not seen my old pupil in over five years.  He would now be about the same age as James’s students in the film.  While I taught him about our Catholic rituals, he taught me about patience, acceptance and communication.  And I think today he would love to sing and dance to Boomarang.

The story of a deaf woman being raped sounds like a bad Helen Keller joke.  Now that we’ve cleared that air, let’s not go there.

Johnny Belinda takes place in a peaceful fishing town in Nova Scocia.  It’s your typical small town, where everyone knows everyone and newcomers, like Dr. Robert Richardson (Lew Ayres) are subject to idle gossip.  Right away we see he’s a kind and generous man, who even makes a house-call in the middle of the night to help birth a baby cow, for the McDonald family, who his secretary warns, might not be able to pay.  He discovers Mr. McDonald’s deaf-mute daughter, Belinda (Jane Wyman) and takes immediate interest.  He teaches her sign language and it turns out she’s a quick learner.  Before long, she’s able to read her family’s lips and communicate like never before.  How happily life changing.

Just because she’s learning, doesn’t mean she’s free from ridicule.  She’s referred to as “the dummy”, pitied and laughed at by most.  She becomes a lewd interest of the town’s good ol’ brute, Locky.  His girlfriend, Stella warns him to leave her alone, not realizing the extent of his ill intentions.  After getting drunk at a town party, Locky stumbles over to the McDonald residence and rapes poor Belinda.  It all would’ve gone unnoticed and quiet, but she ends up pregnant with his child.  Once this scandalous news hits the village, rumors arise about who they suspect the father is.  The whole family is avoided like lepers and business drops mixing financial struggles to their heartbreaks.

Jane Wyman won the Oscar for best leading actress, without saying a word.  She stares with big innocent eyes that light up with understanding and unforeseen intelligence.  She doesn’t try to overcompensate for lack of words, like a silent film star.  Her sign language isn’t flamboyant either, she’s calm, obedient, and understanding.  The only time we ever see fear or conflict is just before her attack and in the more climactic action.

I was surprised to see such daring themes of rape and disability vs intelligence in the forties.  I don’t mean to generalize, but this seemed to be the time period for rallying war films, sweeping romances and giddy comedies.  Hard subjects like this must’ve averted quite a few eyes.  But those daring the trip to the theater must’ve been enthralled.  Many times today we still question if a disabled person can take care of a child, and that comes up in the later part of the film.  I’ll let you witness the debate with fresh eyes.

This isn’t one of those great classics everyone talks about, but it is good.  If you’re interested in deaf issues, this is a great example with many edges.  If you’re looking for a lighter film, skip it.

“There’s only one shame, failing a human being who needs you.”