Arrival is an alien encounter film like none before. It is a brilliant mix of science fiction, mystery and political allegory, all surrounded in glorious visual artwork. It uses a very dim but clear style of cinematography. It makes the film very gloomy and very realistic. It makes it easy to imagine something like this happening in the near future.

In Arrival, twelve alien spaceships mysteriously appear across Earth. They are massive, dark monolithic and silently hover just above the ground. Louise (Amy Adams), a linguistics professor, is brought in by the government to help interpret the alien’s language. Without time to settle into the camp set up in remote Montana, she and a small team are sent into the alien’s ship and meet with the aliens every few hours. Within a few sessions, they discover the alien’s written language. As the team tries to understand the new language and find out why the aliens have come to Earth, the world outside is frightened of the new arrivals and is edging closer and closer to war.

Throughout Arrival, there is a consistent theme of things not being linear, but rather a loop or palindrome. The aliens write complex sentences in a circle, resembling an enso. There is a child named Hannah. And ever present is the idea that time may not be linear either. As Louise delves deeper into understanding the alien language, she seems to unlock a greater understanding of this herself. It’s a bit of a head trip, but really beautiful. 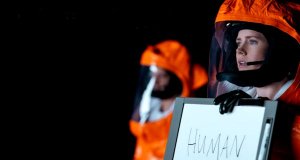 I am disappointed that Amy Adams did not receive an Oscar nomination for her performance in Arrival. She is the central character grounding the strange events and translating them into an emotional, tangible response. When things are extremely stressful, like arriving at the alien ship and only minutes later going inside to meet the aliens, she portrays a kind of panicked serenity.  When others would be trembling in panic, she is breathing faster, but still able to keep her feet on the ground, no matter if gravity suddenly turns ninety degrees. She portrays Louise as curious, smart, charismatic and tenacious enough to lead the way learning to communicate with the aliens. Sadly, science fiction films are rarely recognized for their acting.

The most frightening moments within Arrival are not actions of the aliens, but of people. Human nature in a stressful, mysterious, global situation can bring out the worst in people. We hear news reports of riots and looting. We see the damage polarized radio shows can produce. As one camp makes worrisome progress with their pair of aliens, they assume the worst and cut off communications with the others. Attacking the alien ships and plunging into global war is a terrible threat that looms closer and closer. Isolation, refusing to communicate and rogue violence do not help.

Arrival is a brilliant film about the importance of effective communication and not jumping to conclusions about outsiders, no matter how alien. Language of any sort is a tool, a gift and sometimes a burden. We must be thankful for it and use it wisely.