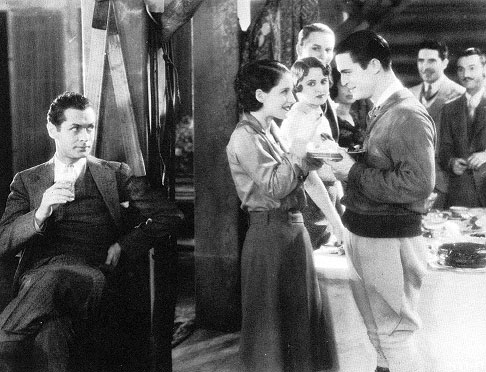 Ah, the sacred institute of marriage.  There’s nothing quite as beautiful as two young people just oozing with love and declaring they’ll stay together forever.  How sweet.  It makes me want to puke.  Give them a few years and they’ll stray like alley cats in heat.  It’s the American way.

Paul (Conrad Nagel) is the nice guy who finishes last.  He and Jerry (Norma Shearer) have always been great friends, but just friends, you know how that is.  Poor Paul watches as Jerry is whisked away by Ted (Chester Morris).  The night Ted and Jerry announce their engagement, Paul keeps a happy face by drowning his sorrows while the happy couple mush around calling each other Romeo and Juliet.  I’d need a good drink to get through that too.  Problem is, Paul drives afterwards, crashes and poor Dorothy (Judith Wood) is hurt pretty badly.  As a sort of apology, Paul marries Dorothy in a unceremonious hospital room while Jerry and Ted have a lavish sun filled church wedding.  Just not fair, is it?

Three years later, Jerry finds out that Ted has been unfaithful.  He downplays it by saying over and over, “It don’t mean a thing.”  That’s no comfort and Jerry nearly drives herself mad, so her friend Don (Robert Montgomery) takes her on the town to help her forget and they sleep together.  Jerry decides to tell Ted and uses the term, “I’ve balanced our accounts.”  An eye for an eye, right?  But Ted is instantly infuriated and feels like a laughing stock, so they divorce.

Once they hit splits-ville, they both go out and play the field for a while.  Then Jerry finds Paul again (yup, we saw that coming).  He’s not happy being with Dorothy since she’s so bitter about the accident and he wants to cheat with Jerry.  At this point I was groaning, knew the ending could only go one of two ways and wondered how far this cycle of unfaithfulness could go.

In relationships between men and women, there will always be double standards.  Men can sow their wild oats and “it don’t mean a thing,” but once their woman strays, she’s labeled and he can’t go on with such a wounded pride.  Oh, cry some more.  Even in 1930 there must have been some pissed off women in the audience.

If you love filling your life with petty drama this one’s for you.  If you can’t stand to watch people do stupid things and wonder why their life is swirling in the toilet, skip this.  Oh, and here’s a great pickup line that’s been around a while, “I’d like to make love to you ’till you scream for help.”  Let me know if you get maced in the face with that one.