If you go to see most stand up comedians today, you’re likely to hear a few F-words or racy jokes.  Back in the sixties, Lenny Bruce was fighting to use those words and jokes in his act.  He wasn’t just trying to use his foul mouth simply for a shock factor.  His jokes, and the fact that he was arrested for obscene language when artists have a right to free speech, helped expose people to the hypocrisies within their society. 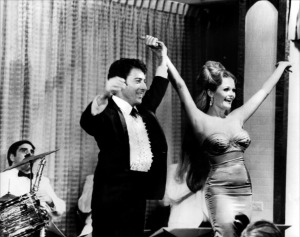 Directed by Bob Fosse and starring Dustin Hoffman, Lenny isn’t your straight forward biopic.  There are three different time-frames intertwined throughout the film.  First, there’s the point A to point B narrative look at Lenny’s life, starting from his early stand up days when he just met Honey (Valerie Perrine) , a stripper he later marries, has a child with and divorces.  Then there are cuts from Lenny’s stand up act that help shine more light on situations within the narrative.  For example, Lenny’s bit about why men cheat goes on while we see his own infidelities.  Finally, there are interviews of Honey, his mother and his agent, weighing in on narrative moments, often with the historical and biographical aspect.  Feels like an odd Citizen Kane tribute.  Plus, the film is all in black and white, feeling like a gritty sort of German Expressionism, which I found very beautiful.

If “bad words” blind you, you might want to tip-toe through this paragraph, because what I really loved about this film, is how Lenny uses his act to make his audience question what is considered indecent.  After Lenny is arrested for using the word “cock-sucking” in his act, he knows he is being watched like a hawk on stage.  So he decides to point out the police in the theater, now watching and waiting for him to trip up, and confess to his audience that he was arrested for a term that he now refers to as “blah-blahing.”  For the next few minutes, he discusses “blah-blahing” with the audience and the whole bit is ten times as dirty as when he just spoke the word as a noun once.  Yet, the police don’t move.  It seems they’re just waiting for an obscene word, ideas are fair game. 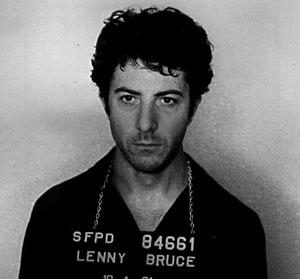 While part of me embraces this cynical, foul mouthed liberation of ideas onto the masses, it doesn’t feel like comedy.  It feels like preaching with a few punchlines.  You put Hoffman’s Lenny next to an evangelical preacher and you’ll find opposite words and messages united by a style that easily infiltrates softer minds.  Simply, if you don’t agree with the man with the microphone, then you look like the enemy.

As for Hoffman’s performance, there’s good and bad.  There is a beautiful energy and passion he puts into Lenny, mostly off stage.  His early chemistry with Perrine is wonderful.  The few moments we see Lenny falling hypocritical to his own stand up routine make him feel real.  For example, as a bit in his act talks about how ridiculous it is for men to “always expect women to be a combination Sunday school teacher, and $500-a-night hooker,” he suggests that Honey stop stripping.  I think he realizes how contradictory we all are.

While Lenny is a great way to learn about the infamous Lenny Bruce, it seems to build him up as this martyr for the future of comedy.  I hate to ruin the ending for everyone, but dying of a drug overdose doesn’t gain much sympathy from me.  The film is done well, the style is consistent and thoughtful, but the story of Lenny is not anything that stirs me, but thanks for taking a few hits so we can say all the things that just get bleeped on television.  And if you cover your ears at strong language or cover your eyes at risqué images, there isn’t much here left for you.

“If you just found those two words obscene you probably can’t come.” 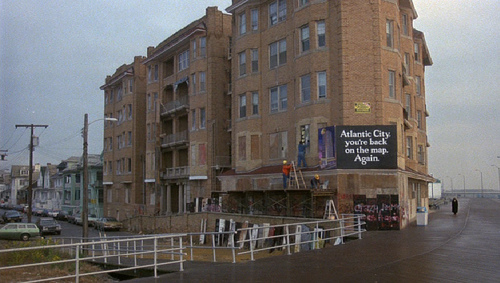 In the film, Atlantic City looks like a stubborn floater in the toilet.  There’s graffiti everywhere and buildings being demolished left and right.  A build board on a rundown apartment building pokes fun at the city’s embarrassing decline, reading, “Atlantic City, you’re on the map again.”  If it were not for the people who are too old go anywhere new, the city would be a ghost town.  They keep the casinos in business and gives the younger people, who must have steered wrong at some point to land in Atlantic City, jobs in those casinos. 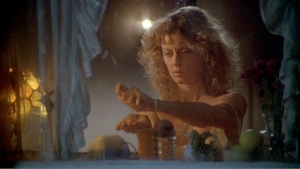 Sally (Susan Sarandon) works in the oyster bar of a casino, but she’s training to become a dealer.  When her bohemian looking husband, Dave (Robert Joy) and sister, Chrissie (Hollis McLaren) (who is pregnant by Dave) arrive unexpectedly, Sally is less than welcoming to them.  They’ve traveled a long way, and though the back story is never fully revealed, it seems that Sally owes Dave for helping her leave their hometown in Saskatchewan, Canada.  Along the journey to Atlantic City, Dave has found some drugs he plans to sell.  Problem is, Atlantic City seems to have some standards about how drug dealers should dress for success and Dave looks like a hitchhiking hippie.

Enter Lou (Burt Lancaster), an aging man who lives in the apartment next to Sally’s and considers himself a big time gangster, though he only occasionally pulls some small deals.  He’s a kind old man, who takes care of the elderly lady downstairs, Grace (Kate Reid).  Dave strikes up a little friendship with Lou, and has Chrissie take care of Grace for a while so Lou can sell the drugs for him.  But while Lou is making the deal, Dave is murdered.  Now that Lou is making wads of cash thanks to Dave, his odd sense of chivalry tells him that he is obligated to help Sally. 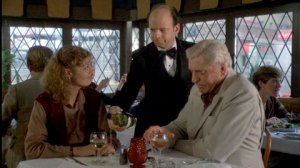 In the beginning of the film, we see Lou watching Sally through her kitchen window as she does an odd routine.  She rubs fresh lemon juice all over her neck and chest while listening to opera music.  At first, we assume Lou is an old creepy man watching for kicks.  In a scene later, after the relationship between Lou and Sally has grown and see understand Lou’s need to protect beautiful young women, he confesses to watching Sally.  What he says, and the way he says it is not creepy, he has a real sense of admiration.  The way he describes what she does in detail shows that he watches her in this private moment in an attempt to understand her in a soulful way.  The fact that Lancaster can pull that conversation off perfectly and convince me that he’s not a creepy old man watching from his window, deserves his Oscar nomination.

In the end, Atlantic City is a well written tale of small time crime and passion.  The characters are likable and the situations don’t get too far fetched for our imaginations.  Best of all, the film shows us how people can get stuck in the crumbling world of Atlantic City and how fitting it is for them.

“You should have seen the Atlantic Ocean back then.”

The war on drugs is unlike any other.  Sides are blurred.  Friends become enemies and vice versa.  Soon, everyone is a 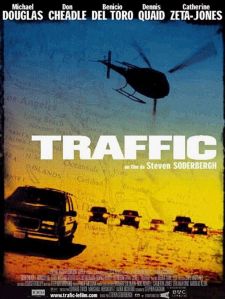 In Traffic, many stories intersect each other.  A wife in an upstanding community realizes her husband has been running a drug company.  Two Mexican police officers track down traffickers in Tijuana.  Two American officers keep undercover in their van.  And a Judge appointed by the President to tackle this war, discovers that his teenage daughter is an addict.

The stories are moving and each character has as much motivation as the next, but at times it does get confusing.  One moment in Mexico right next to another in Washington, at some points, they don’t seem connected other than the fact that it’s about drugs.  When you sit down afterwards and think it through, yes, it all fits together, but it involves some brain power.

One way director Steven Soderbergh tries to keep all the stories straight is his use of filter colors.  In Mexico, everything is a tan yellow, like a washed out western in the bright southern sun.  In Washington and Ohio, with the Judge and his daughter, everything is blue, cold and sad up north.  Scenes with the wife and undercover Americans, there is no filter.  My guess to explain this choice is because their two stories intersect best with the others.  And you can’t make everything tan and blue.

Now, the story line that is most likely to resonate with the average person is the story of the Judge and his daughter.  One can view it as typical teenage rebellion against the old man’s work that turns into something much more serious.  The film doesn’t preach too much about the dangers of drug use.  Once it shows the lifestyle and risks along with it, there’s no need.

In a scene where the daughter and her teenage friends are getting high, I couldn’t help listening too much into their conversation.  At first glance, they sound like stupid kids high as a kite, but after a moment, it sounded like a modern day Holden Caulfield from Catcher in the Rye.  They complain about how fake and full of shit society makes everyone, but they’re stupid and won’t even call an ambulance when a friend overdoses.  I wonder if that’s what Soderbergh intended, or if I’m just full of shit.

Parents with teenagers should watch Traffic with caution.  This movie could cause some needless paranoia.

“We act like we have all the answers and we’re totally invincible, like our parents seem and their parents before them, and I’m sorry, that I have to be the one to say this, but it’s fucking bullshit.”