One day, about six years ago now, I got a little bored waiting for a class to start and wondered the corridors of Grissom Hall.  When you’re a student at Purdue, everyone gushes about Neil Armstrong, Amelia Earhart and even Orville Redenbacher but Gus Grissom seems to be just a dusty figure on the back shelf.  In this hall there were plaques, pictures and other memorabilia to remember one of our most important graduates yet I wondered what rock I’d been under not realizing Gus and I were united by our school.  I knew my space exploration history alright: Gus being one of the fist astronauts to orbit the Earth, yadda yadda yadda, let’s get to the moon landing already.  For some reason it wasn’t until bored little Freshman me wondered around until I really realized that if it hadn’t been for Gus and his six other Project Mercury astronauts there would be no reason to remember Neil Armstrong.  Suddenly, I had a new favorite alumni. 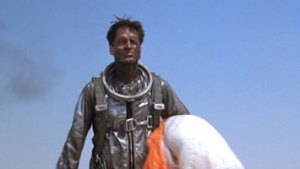 The Right Stuff encompasses all that was great about the space race and the beginnings of NASA: the spirit of adventure, thrill of flight, the men who dared to pushed the envelope beyond basic flight and rocketed into the unknown of space.  To get all this into a film, it has to be three hours long.  It starts in 1947, where test pilots are dropping like flies in attempts to break the sound barrier ends in 1963 with the end of Project Mercury, you can’t cram that amazing time period of so much advancement in flight and the entire space race into just two hours.  So before you strap in, have an extra bag of popcorn handy.  Though it is long, it’s worth the time.

The dangers and sacrifices of flight are one of the first things we see in the film.  Wives get a dreaded visitor, there’s a burial in a lonely desert graveyard for the pilots and they become a picture on a barroom wall.  Every man flying over that desert knows they could be next, yet they continue to push the envelope.  Eventually, it’s Chuck Yeager (Sam Shepard) who breaks the sound barrier, the first major achievement in the film.  After that, it seems Chuck keeps racing to stay the fastest man alive.

There’s also Fred Ward as Gus Grissom, Dennis Quaid as Gordon Cooper, Ed Harris as John Glenn and Scott Glenn as Alan Shepard.  Unless you already know all your astronauts it can be hard to keep them all straight for three hours.

When the Russians launch Sputnik, (Russian achievements are quick shaky scenes of a rocket launching and a man laughing behind the fumes, looking like an evil Russian wizard or something sinister), suddenly America has to scramble around to catch up.  They decide to try to be the first country to send a man into space.  When choosing the first astronauts, they first think about sending acrobats and daredevils, but thankfully come to their senses and seek out test pilots.

This is when the fun astronaut training begins and we see all the strange tests scientists put the prospective astronauts through, from blowing in a tube to keep a ball floating, to more odd and intense tests you may have never imagined.  All these tests go to determine the seven original astronauts chosen for Project Mercury.  Then the film goes into the attempts of launching rockets, the humiliation the astronauts face when NASA decides to first send a chimp and finally into sending men into space.

It’s a long haul to finally get out of the atmosphere, but it’s all worth it and you’re never bored.

The music is wonderful.  I’ve never heard Holst’s Planet Suite put to better use.  I’ve always found it uplifting and an audio representation of adventure and passion.  But it sounds like achieving such a brilliant score wasn’t so easy for composer John Barry when director Philip Kaufman tried to describe how he wanted the score as “sounding like you’re walking in the desert and you see a cactus, and you put your foot on it, but it just starts growing up through your foot.”  By that description, the soundtrack could have been pretty trippy.  Somehow Barry wrote a beautiful score around Holst’s Planets and incorporated a piece from The White Dawn and a few other classical favorites of Kaufman’s to send us to the stars and back.

If you have any interest in space exploration, the early history of NASA, of flight or you’ve ever dreamed of being an astronaut, this movie is for you.  Even if you’re not an astro nut, the drama is captivating enough to keep nearly every kind of movie goer interested.  There’s no technical jargon to make you feel stupid and you’ll probably learn a thing or two.

“Monkeys? You think a monkey knows he’s sittin’ on top of a rocket that might explode? These astronaut boys they know that, see? Well, I’ll tell you something, it takes a special kind of man to volunteer for a suicide mission, especially one that’s on TV. Ol’ Gus, he did all right.”

“A woman’s whole life in a single day. Just one day. And in that day her whole life. ”

The film opens with a reading of Virginia Woolf’s suicide note as she fills her pockets with stones and walks into a river to drown herself.  The tone is firmly set.

In The Hours, we see three different days for three women spread over sixty years.  There’s Virginia Woolf (Nicole Kidman) in the middle of writing Mrs. Dolloway.  In 1951, Laura Brown (Julianne Moore) is a housewife on the verge of a complete breakdown.  And in 2001, Clarissa (Meryl Streep) is planning a party for her dear friend and writer, Richard (Ed Harris) who is dying from AIDS.  They’re connected by Virginia’s novel and the issue of suicide, in one way or another.

I would like to to call this a “woman’s issues film”; the name sounds horrible, but this isn’t stupid or romantic like a chick-flick nor is it estrogen fueled sap like a Lifetime movie.  The problems these women face may look trivial at first, but the utter loneliness and despair within Laura or the need Clarissa has to take care of Richard, these problems can’t be solved with a shopping spree.  Some may be completely bored by this film, the talk is quiet, not a lot of action and there’s a need to read everyone’s faces and decipher the tone of their voice.  Others (myself included) will be enthralled, the characters are fascinating, full fleshed for all their good, bad and upsetting traits and their issues are genuine and personal.  They won’t cause the world to stop turning (and they know it), but in a moment everything can be turned upside down or lost.  That simple truth is what makes this pull on your heart and maybe even donate some tears.

Kidman’s performance as Virginia Woolf is amazing. This is Nicole like we’ve never seen her before: with frumpy hair, in an shapeless floral sack-dress.  I honestly had to double check the IMDB page to make sure it really was Kidman, that fake nose went a long way.  There’s more than the costume and makeup, but the way she can loose herself staring into space, the intrigued look as she studies a dead bird, it’s suddenly all Woolf and Kidman is nowhere in sight.  That’s what the Best Actress is all about.

This can be a very hard film to get through.  Despair and loneliness are not glossed over and suicide can be a tough subject to tackle.  It is worth the view, but don’t go it alone with a pint of ice cream, it isn’t that kind of girl movie.  You might be in real need of a hug.  At the heart of this film, a sad, sad truth is brought out I only wish were not true: “Someone has to die in order that the rest of us should value life more. It’s contrast.”