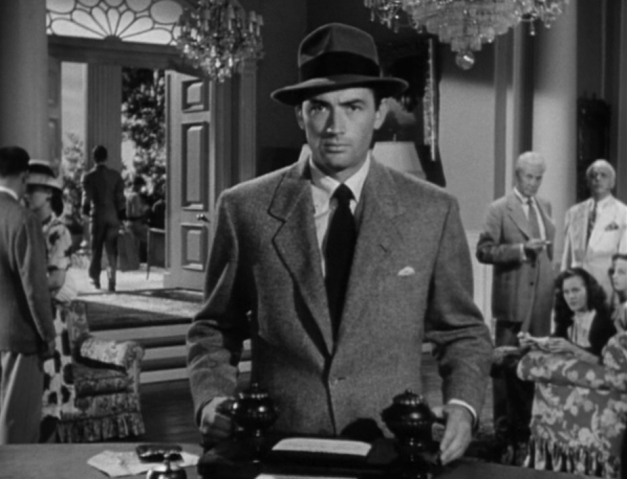 Phillip Green (Gregory Peck) seems to be trying to carry the whole world on his shoulders.  He’s a widower raising a young son, taking care of his sick mother, wooing a beautiful woman and works as a respected reporter.  His assignment is to write an article about anti-Semitism, an especially touchy subject just after the full disclosure on the horrors within Nazi concentration camps.  After gathering dry facts and evidence he decides that the best way to understand and write a passionate article about the Jewish plight is to pretend to be Jewish.

This sounds very daring way to open a can of worms.  I was excited to see this film, it sounded like it would be a Jewish Black Like Me.  The problem is, the whole film is all talk and no action.  Even the parts that are supposed to be dramatic, where it seems that Green might finally try to take action, is just talk.

These are good conversations though.  In an early scene where Green is trying to explain to his son about his assignment and why there is so much prejudice in the world against Jews, it seems like a conversation the whole world might need some help on in 1947.  Later, Green talks with a lady who changed her name to one that sounded less Jewish.  She talks about how she sent two resumes for the same job, the only difference being the last names and how she got hired under her new name.  She reveals a great deal of self loathing and lack of pride in her heritage.  While it’s an eye opening point, it would have been more touching if we could see this in action, rather than in reflected conversation.

The action we see is spontaneous and muddled in more talking.  There’s a punch thrown in a restaurant when one man uses a derogatory term.  Green’s son comes home shaken and roughed up after a group of boys thought he was Jewish.  We don’t see the scuffle (the boys just yelled hurtful things and ran), simply Tommy a little shaken and asking tough questions.  When Green seems like he’s finally going to take a stand and goes to a resort to ask if they cater to his people, the owners just leave him standing at the front desk.  His question to the management is all the action he can take.

Though Eliza Kazan won for his direction, he later admitted that he didn’t really care for his film.  He said that he felt it lacked passion and that the romance was too forced.  I completely agree with him, but commend his effort for trying to bring the ugly truth about anti-Semitism into American conversation in a time where these dark questions were surfacing.

“Because the world still makes it an advantage not to be one. Thus it becomes a matter of pride to go on calling ourselves Jews.”