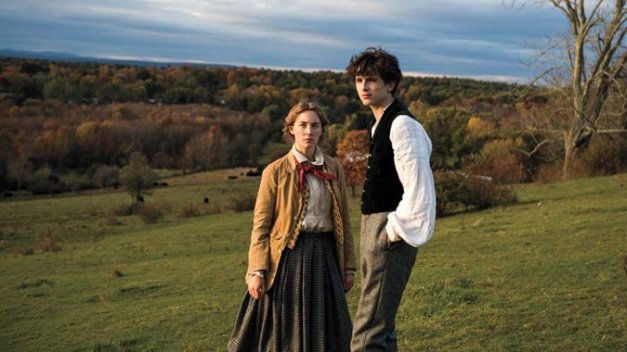 My little boy asked me what Little Women was about; he’s often curious about the movies I go see. I explained to him simply that it’s about four sisters growing up together during the Civil War. They help each other and others through hard times and celebrate the happy times. They play, laugh, fight a bit, and love each other to no end. He smiled and said that it sounds like our family. Perhaps that’s what Greta Gerwig, and Louisa May Alcott before her, had hoped for, that we would see the March family as our own, connect to their struggles, triumphs and misadventures. With the film’s PG rating, I half considered going again to take my son, but at 5 years old, movies without talking animals, robots or musical numbers aren’t likely to hold is attention. Maybe in a few years. 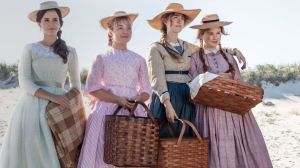 Never could I have imagined such a perfect cast for this story. Saorise Ronan leads the film as Jo, the second eldest March sister who dreams of being a writer and an independent woman, something very rare in 19th century America. In the present, she is living in New York, selling stories but comes home at the news of Beth (Eliza Scanlen), her younger sister, has fallen ill. The eldest sister, Meg (Emma Watson) has a husband, two little kids and quiet financial woes. Watson portrays this modest, yet happy lifestyle well, but with a twinge of longing for more. Amy (Florence Pugh), the youngest sister seems to feel left out at times and is often gone when life is at its hardest, either by inexperience or away with Aunt March (Meryl Streep). Timothee Chalemet plays Laurie, the rich boy next door who is often a playmate and potential romantic partner to the sisters as they grow up together. Laura Dern portrays the girls’ mother, a strong resilient woman who has to lead her girls alone while her husband, (Bob Odenkirk) is off at war.

I love how at times these actors are portraying children at play in one scene and grown women with children, personal, financial and professional problems in the next. It can often be hard to believe young people in their 20s portraying a young teen, but that rarely happens in this film. The magic is that they are so believable and recognizable in both instances. I loved Amy as a young, jealous sister, desperately wanting to keep up with Jo, and Pugh allows her to grow up gracefully while keeping that chip on her shoulder. Each actress does this with their characters so wonderfully.

One of my favorite, and most touching scenes happens towards the beginning of the film and helps set the perfect tone. It is Christmas morning and the girls wake to find a beautiful breakfast sprawled across the table for them. Before they begin, their mother returns from the cold to tell them that the woman down the road with five small children has no food for them and asks her girls to give their breakfast to her. There’s a moment of hesitation, they’re young, and looking at that food we can’t blame them. They all realize it’s the right thing to do. The image of them carrying picnic baskets together through the snow is wonderful, but the joy they bring to this poor woman and her children with so little is fantastic. You can feel the warmth of the kind act straight through the screen. You can imagine no greater joy has happened in that cold shack except that Christmas morning. And the girls are rewarded for their kindness.

This adaptation is so full of color, movement and life. We feel the exhilaration of the dances and galas the older girls attend. Meg’s wedding, while so modest by today’s standards, could be the envy of modern brides. It is so full of color, beauty and life. Moments of sadness are full of blue and gray shadows. The costumes, from modest coats and hats in the snow to beautiful ball dresses are all lovely and the color pallets seem to match the personalities of the character wearing it. 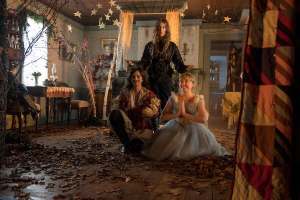 Gerwig writes the screenplay so that the saddest moment in the film as a focal point where the past and present timelines meet. It’s a wonderful trick to the writing and makes the idea of moving on even more poignant. This moment, which is no less devastating for those who already know that story, made the entire sold out theater I sat in cry together. It was a rare, beautiful moment. All around I could hear stifled sniffles and atmosphere was filled with silent, shared tears.

I could go on and on about Gerwig’s Little Women. I feel that its six Oscar nominations are not quite enough, I firmly believe Gerwig should have been nominated for best director. Best Picture, adapted screenplay, original score, costume design, supporting actress for Pugh and leading actress for Ronan are certainly nothing to take for granted. But instead of sounding too greedy, I must leave it at this: Never have I seen a movie that so perfectly describes the plight of these young 19th century women. Amy spells it out perfectly, how little rights and economic power she has and how marriage may not always be about love, but money and how complicated and heartbreaking that can be. Jo shows us this, as she struggles to be taken seriously as a writer while secretly longing for love. Meg shows us that while it is hard to struggle, love is worth it. And Beth breaks our hearts with her encouragement, music and kindness.