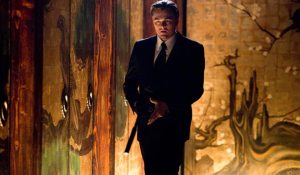 I came home from college one weekend to take my sister and brother to see Juno.  They were seventeen and thirteen at the time, right in the audience demographic.  When we got home, dad asked us about the movie.  They casually told him it was about a sixteen year old girl who gets pregnant.  I got drilled, but just for a moment.  I told him flat out that there’s nothing in the film that glorifies or encourages risky teen behavior, it was quite the opposite.  That calmed his nerves, but he still asked if they learned anything.  My sister said, “Yup, don’t get pregnant.”

Juno (Ellen Page) is a typical sixteen year old girl, yet not so typical.  She has a walk, talk and actions that seem like she wants people to know that she knows who she is, but we soon find out that she has a lot to learn.  When we first meet her, she casually walks down the street swigging a gallon of Sunny D and buys her third pregnancy test of the day at the mini-mart without even trying to hide it.  I don’t think I’ve known anyone at sixteen to be that independent and confident in such a huge pickle.

Juno first breaks the news to her friend Leah (Olivia Thirlby), who is loyal, but seems to be a bad influence.  In their hamburger phone conversation, we get the idea that she’s helped other friends secretly get abortions and is sexually active herself, like it’s no big deal.  Many times kids follow their friend’s lead, it makes me wonder if Leah is one of the reasons Juno decides to have sex.

That brings us to the father, Paulie Bleeker (Michael Cera), a skinny boy constantly running with the track team that gallops across the town like a herd of horses in bright yellow shorty-shorts.  He’s a very soft spoken boy and when Juno breaks the news to him, she leaves exits casually saying, “Sorry I had sex with you.”  All he can do is stand on his stoop for a moment wondering out loud, “Who’s idea was it?”

So after Juno chickens out of an abortion, she and Leah look for a nice couple “desperately seeking spawn” in the PennySaver.  They stumble upon a picture of Mark and Vanessa Loring and decide that they will be the adopted parents.  Now that Juno has a plan all figured out, she can finally tell her parents.

And cue the two most dreaded words a parent can hear from their teenage daughter: “I’m pregnant.”  They would rather deal with Juno being expelled or into hard drugs, anything but this.  Juno’s father and step-mother (J.K. Simmons and Allison Janney) are obviously disappointed, but immediately jump into support mode.  I love Simmons in this scene, the disappointment is in his voice as well as in his face.  “I thought you were the kind of girl who knew when to say when.”  Ouch, a hard blow from dad, and all Juno can muster is, “I don’t know what kind of girl I am.”

So Juno and her father go to meet Mark and Vanessa (Jason Bateman and Jennifer Garner) to hammer out legal details over the adoption.  While there, Juno discovers that Mark is a musician and starts to bond with him, creating a very slippery slope.  Later, she drops by unannounced to show him ultrasound pictures and again for no real reason.  Juno is much too young to understand that her maternal instincts are drawing her closer to the future adopted father of her child or the danger she’s creating by spending time with him.

Around Juno’s eighth month, shit hits the fan (I won’t tell you how) and she finally breaks down.  She’s been able to hold herself together and keep a brave face through pregnancy tests, ultrasounds and the thought of giving her child away, but this is too much.  It’s like she’s finally realized (made us realize as well) that she is just a kid and that all these issues she’s dealing with and everything happening inside her is bigger than she can really comprehend.  “Just out dealing with things way beyond my maturity level.”

I hope people now see why I took my teenage siblings to see Juno.  The way the film illustrates the very real issues of teenage pregnancy can be a huge eye-opener for adolescents, and the immature dialogue and quirky characters will help pull them into the film.  Kids aren’t prepared to deal with all these issues and they get annoyed with their parents and teachers warnings.  I’d suggest watching Juno to help open up the teenage-sex-is-a-dumb-idea/don’t-get-pregnant talk with your kids.  They’re more likely to listen to a good movie and base the conversation off of that.

“Uhhh, I hate it when adults use the term “sexually active.” What does it even mean? Am I gonna like deactivate some day or is it a permanent state of being?”