Alfred Hitchcock’s North by Northwest has been hailed as his most entertaining film.  With a case of mistaken identity putting a man in danger and being hunted across the country, it is an exciting time.  Throw in some planes, trains, automobiles and Mount Rushmore, the thrills take some unexpected turns over and over again.  Top it off with a dash of romance to twist the plot further and that trademark Hitchcock suspense and North by Northwest is nearly perfect.

The story is that of average ad man Roger Thornhill (Cary Grant), an unglamorous bachelor complete with a badgering, overbearing mother (Jessie Royce Landis).  He is mistaken by a group of foreign spies as government agent George Caplan, kidnapped and taken to a mansion owned by a Mr. Townsend.  There, his kidnapper (James Mason) forces him to drink copious amounts of bourbon and sends him off down a dark, twisty road in a sports car.  This is got to be one of the most memorable, and thrilling drunk driving scenes on film.  In jail, no one believes the intoxicated Thornhill.  When he tries to prove his story, it seems that his captors have covered everything up and merely posed as Townsend.  Realizing that only the real Mr. Townsend can prove his innocence, Thornhill goes to the UN only to leave there wanted for murder.  He has no choice but to run from both the police and his assailants while trying to track down this George Caplan, which turns out to be one hell of a goose chase. 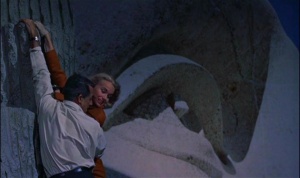 On the train ride from New York to Chicago, Thornhill finds a companion to keep him busy and even helps hide him from the authorities.  Eve (Eva Marie Saint) is another one of Hitchcock’s blond beauties to watch out for.  While she aids Thornhill and pulls him in with her beauty, she has her own agenda.  But when Thornhill finds out, he still cannot let her go, and his chivalry leads to a daring rescue and chase, scaling Mount Rushmore.

One of the most memorable scenes of this film is the crop duster scene.  After making it out of Chicago, Thornhill is told to wait for a ride, out in the middle of harvested corn fields.  The flat, expansive and isolating scene perfectly depicts the fields of the mid-west.  When a plane in the distance seems to be “dustin’ crops where there ain’t no crops,”  tension builds and it is a kick to see Grant run and dive from a swooping plane.  It’s one of the most iconic moments of the film, and ends with quite an unexpected bang.

I’ve got to say, I love how this trailer shows Hitchcock selling this movie like a vacation package.  In 1959, people were flooding to theaters to see big epic films, like Ben Hur.  That was some fierce competition.  So why not send them from New York, to Chicago and on to Mount Rushmore with some murder and suspense?  I guarantee you will never see that monument the same way after watching North by Northwest.

However, while Hitchcock was selling it, the Academy was not buying it.  In the end, North by Northwest took home no trophies for its three Oscar nominations: Original Screenplay, Editing and Art Direction in a Color Film.

“I don’t like the way Teddy Roosevelt is looking at me.”

In On the Waterfront, Terry Malloy (Marlon Brando), once a promising prize fighter, is messenger and errand runner for Johnny Friendly (Lee J. Cobb) and the corrupt men who run the docks.  One night, his job is to coax Joey Doyle, a well liked young man who plans on testifying against the mob, to go up to the roof of his apartment building.  Terry doesn’t realize until it is too late that he is a pawn helping to carry out a murder.  As Joey’s sister, Edie (Eva Marie Saint) and the local priest Father Barry (Karl Malden), start snooping around the dock for answers, Terry becomes conflicted.  He is one of the few lucky men who get to work every day because of his mob connections, yet sees the pain he inadvertently caused through just doing what he was told.  As Terry’s guilt rises, he becomes closer to Edie in a partially romantic, partially protective relationship.

Terry knows he can’t be with Edie or keep her protected from Friendly and his thugs if he doesn’t come forward to help put a stop to them.  But soon, another man seeks out confidence in Father Barry about testifying against Friendly, but he is killed in what is supposed to look like an accident.  “Conscience. That stuff can drive you nuts.”  That is especially hard when the right thing is so dangerous.

For some people, it may be hard to sympathize or identify with Terry, until the iconic “I coulda been a contender” scene in the taxi cab.  It is there that all of Terry’s cards are out on the table and we see that his mob days run back further than just being a messenger boy on the docks.  In his time as a prize fighter, his glory days full of so much potential, he took dives for the mob, just to help Friendly score some petty cash and earn a small climb up the dishonest ladder.  At the time, it seemed like a good idea, but Terry looks around now and realizes that got him nowhere.  He now feels terrible about the dirty work he’s involved with and the potential he threw away.  For anyone who was still on the fence about Terry, their heart aches for him after that scene. 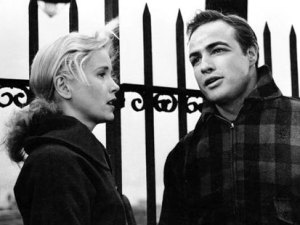 Brando earned his first Oscar win for his driving role as Terry.  He is perfectly unrefined, often chewing with mouth open and leans against things.  Within the workings of the mob, Brando makes Terry too trusting at first, then resentful, and grows to becoming lazy and defiant as his conscience grows.  Around Edie, his guilt pull him towards her and transforms him into a charming young man in his ignorant wise-guy ways.  But the powerful ending, that I dare not ruin for any newbies, is where Brando really gives Terry his finest moment.

Elia Kazan’s On the Waterfront is a story of conscience, courage, integrity and regret.  Not only is the film based off some real life corruption and racketeering in Manhattan and Brooklyn, but Kazan choose to make this film to help illustrate his viewpoint in his decision to identify former Communists in the film industry before the House Committee on Un-American Activities.  Whether or not you keep the film’s realistic or political influences in mind, On the Waterfront is a class must-see for everyone.