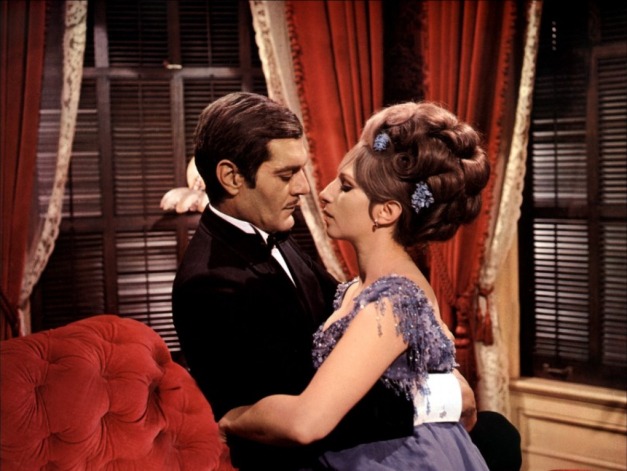 Loosely based on the life of Fanny Brice, Funny Girl tells the story of the young Jewish girl’s rise to becoming the star of Zeigfeld’s Follies through her comedic talent, not necessarily her looks.  When I say loosely, I mean the film takes a lot of liberties leaving out many events in Brice’s life and the character becomes more iconic Barbra Streisand than anything else.  I would not consider this a biopic, but rather a musical inspired from Brice’s life.

Fanny’s only aspiration is only to become a star, but everyone can see that her looks may hold her back.  She works hard trying out for any part out there, even if she has no idea how to roller skate, she’ll do it.  Through some blunders, she realizes that her main talents are singing and comedy.  However, when she is picked by the great Florenz Zeigfeld (Walter Pidgeon) to become one of his famed Follies, she sees that she might be a fish out of water.  With a daring and unconventional surprise, she propels herself forward into stardom.  Along her way to the top, she meets a handsome gentleman who makes his fortune by gambling, Nick Arstein (Omar Sharif).  He’s a dreamboat who wants to give Fanny everything she’s ever dreamed of, it seems too good to be true for this rising star.

This is the kind of musical that’s so wonderfully quirky and utterly full of Streisand, most are likely to either love it or hate it.  I was surprised how much I loved it, perhaps my closeted Glee fan status helps this out quite a bit.  If any Gleeks have not seen Funny Girl, it’s essential to many references throughout the show.

Streisand’s Fanny was a little annoying at first, but she really grew on me.  Even better, I always thought she was at her best while singing.  Best of all, many of the songs are wonderfully funny in a surprising way.  In the red private restaurant scene, the duet between Nick and Fanny had me cracking up with lines like, “Isn’t this the height of nonchalance, furnishing a bed in restaurants?”

What I loved about Fanny are her reasons for becoming a comedian.  Her legs are too thin to be a chorus girl and her nose doesn’t make her a typical beauty queen.  She knows this, and in that ornate, perfectly Zeigfeld bridal finale full of fair and practically perfect women, Fanny turns her lead role on its head at the last minute, knowing exactly how to win over the crowd.  Her comedic genius stems from a defense mechanism, and it works perfectly for her.  Over and over throughout the film, it’s intriguing to see how Fanny uses her funny girl talents to ease the pain in tough situations.

Now, when you look at the Oscar history records and see that Streisand tied for best actress with Katharine Hepburn, there is something to keep in mind.  Streisand was a voting member of the Academy that year and, of course, voted for herself.  I don’t blame her, who wouldn’t do that?  I drove over an hour just to hold the Oscar that later went to Jeff Bridges.  But to vote for yourself, and knowing that that one vote tied you once with the great 4 win, 12 nomination Hepburn, it feels like an awkward joke.  It’s like being a freshman who invited yourself to a senior party.  After all, this was Streisand’s very first film.

“Who told you you’re allowed to rain on my parade?”